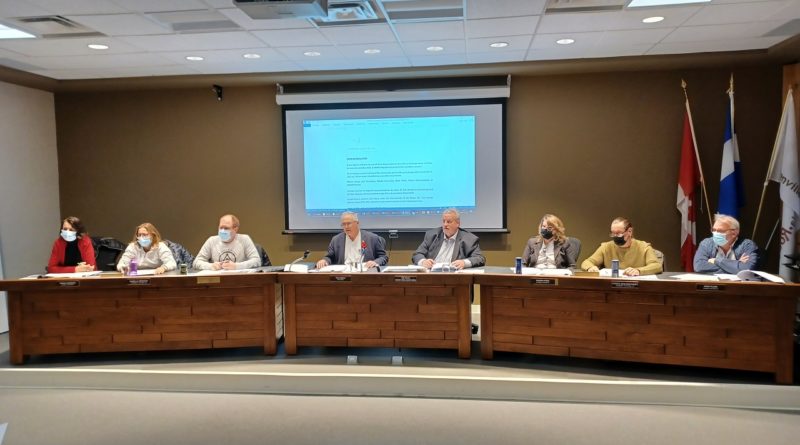 Grenville-sur-la-Rouge council met on November 9 for the first time since the new council was acclaimed. The new council wasted no time in getting down to business – approving a series of resolutions.

Council approved $1,784,324.21 in accounts payable. Mayor Tom Arnold said the amount was higher than usual, because it included costs for three paving contracts. Council authorized the municipality to receive a temporary loan of $3.5 million to cover costs associated with improvements being made to Kilmar, Avoca, and Scotch roads until the Quebec government grant money for those projects is received.

Council appointed Councillor Manon Jutras as Deputy Mayor of Grenville-sur-la-Rouge for 2022. Jutras will also serve as the municipality’s representative on MRC d’Argenteuil council when Mayor Tom Arnold is unable to attend.

A notice of motion was introduced, and council approved tabling a by-law which when fully approved, will restrict street parking to the north side only of rue Principale in Calumet. Overnight street parking will be prohibited to allow for snow removal.

Council has approved granting mandates to obtain permission to demolish structures located on private property in three locations across Grenville-sur-la-Rouge. Each of the structures was built without first obtaining permits from the municipality. The affected properties include buildings on Scotch and Panorama roads, a balcony built without a permit on the riparian strip fronting the Ottawa River on rue Menard, and a fence constructed without a permit on Tervette Road.

Arnold said property owners are responsible for the cost of the demolition of the structures.

Grenville-sur-la-Rouge is pursuing its plans to take ownership of and preserve the former railroad station in Calumet. On November 9, council approved a mandate to enter into negotiations with the Quebec-Gatineau Railway to purchase the vacant station building, which was originally used by the Canadian Pacific Railway when it owned and operated the line. The municipality would like to restore the station as a cultural and heritage facility. Arnold said the railroad is interested in selling the building.