It is now almost invisible from the road, but the hop house Lawrence Ryan built with his father Charles in the 1930s still stands along County Road 10, east of Fournier. It is the only one that still has its brick chimney extending above the roof. Photos Reid Masson

In this multi-part series, Review contributor André Dumont takes a look at the historic Hop Houses that used to thrive along Ridge Road (County Road 10), east of the village of Fournier. Many of the hop house buildings are still standing and can be seen during a drive along County Road 10. In the final instalment, Part 3 of the series focuses on a paper written by Sam Ryan Brunet, that tells the story of his grandfather Lawrence Ryan, who made a decision during the Great Depression to grow hops to earn money. Sam spoke with his 96-year-old grandfather to get his perspective on hop farming in the 1930s and 40s.

Times were tough in the 1930s. Like others around Fournier, Lawrence Ryan’s family decided to grow hops to earn much needed money. This chapter of the Ryan family farm’s history was put to paper by Lawrence’s grandson Sam Ryan Brunet, as part of a high school project.

Lawrence Ryan is now 96. The hop house he built with his father Charles still stands along Ridge Road, east of Fournier. It is the only one that still has its brick chimney extending above the roof.

Sam’s mother, Donna Ryan, brought her son’s paper to the Review. In the course of this series, it turned out to be the most complete written account of hop culture that we were able to find.

Here is an edited version of what Sam wrote after interviewing his grandfather.

The decision was made in 1937 to try growing hops. Other farmers along the road had begun this also. We farmed hops until 1952.

Hops is a labour-intensive crop. In the fall, hills were made and covered with manure. Twenty-foot-long wood poles had to be put in the ground before it froze, using a tool called a hop punch. Hills were spaced 8-9 feet apart so that the team of horses could get between the rows. An average hop yard was about 7-8 acres.

In the winter, cedar trees were cut out in Dunvegan to make new poles. In the spring, the manure was removed from the hills. During the last week of April and early May, the roots were dug out. The suckers were removed and they were used for starting new hop yards.

The next job was tying the hops as they grew. This was done by wrapping the vines around the poles in a clockwise direction and tying them in place two or three times during the month of May.

Strings were cut out of burlap hopsacks. Better ties were made from basswood bark. The bark was saved when a tree was cut down. It was soaked in a creek for the summer. When it was dried, it would be pulled into strings.

In June and July the hops were hoed, all done by hand. Horses were used to work the ground between the rows with a spring-tooth harrow. This was a hot and dusty job.

By July the hops had climbed the 20-22 foot poles. The hops would then blossom or be in the “burr” stage.

Picking season began on a nice day in August and lasted about two weeks. Workers came from the villages. A day’s work was from 7 in the morning until 7 at night. Potatoes and tea were provided to the workers.

There would be about 10-12 gangs. One person in each gang was a poler. He was responsible to pull down the poles and place them on the boxes for the pickers. A hop box was six feet long, 30 inches wide and 30 inches deep. A gang was usually able to fill three to five boxes a day.

The filled boxes were dumped into burlap bags which were picked up by horse and wagon and taken to the hop house to be dried.

In September, the hops were pressed into bales that weighed about 160-170 pounds each. They were sold to breweries.

Later in the fall, the yard was cleaned and the old vines burned. In October and November, the poles were put back into the hills before the ground froze. Every hill was then covered with manure to complete the annual cycle. 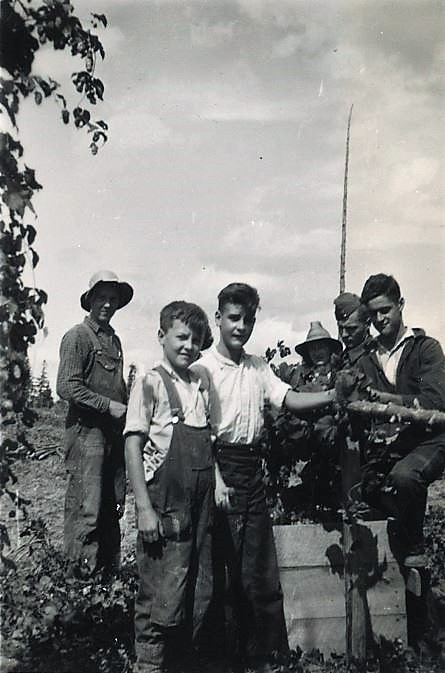 Photo of the Ryan hops operation from September of 1941. In the picture are (l to r) Lawrence Ryan, Will Ryan, Raymond Kelly, Hazel Ryan, Art Argue, and Z. Leblanc. Notice the pole in the back and the hop box. Submitted photo courtesy of Donna Ryan 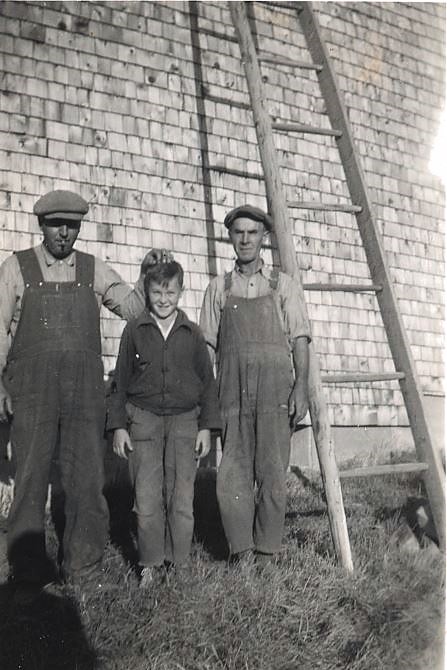 In this photo, also from September 1941, are Lawrence Couture, Will Ryan, and Grandpa. Submitted photo courtesy of Donna Ryan 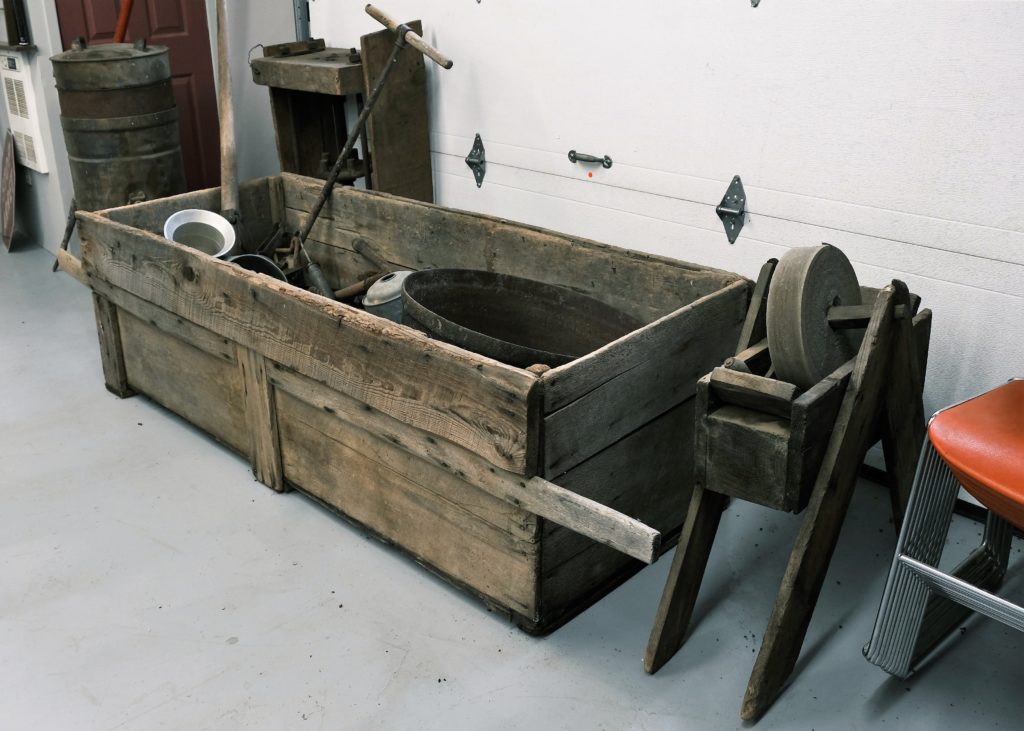 Hop boxes like this one were filled by the pickers. The hops were then transferred into burlap bags and brought to the kiln. Photo André Dumont 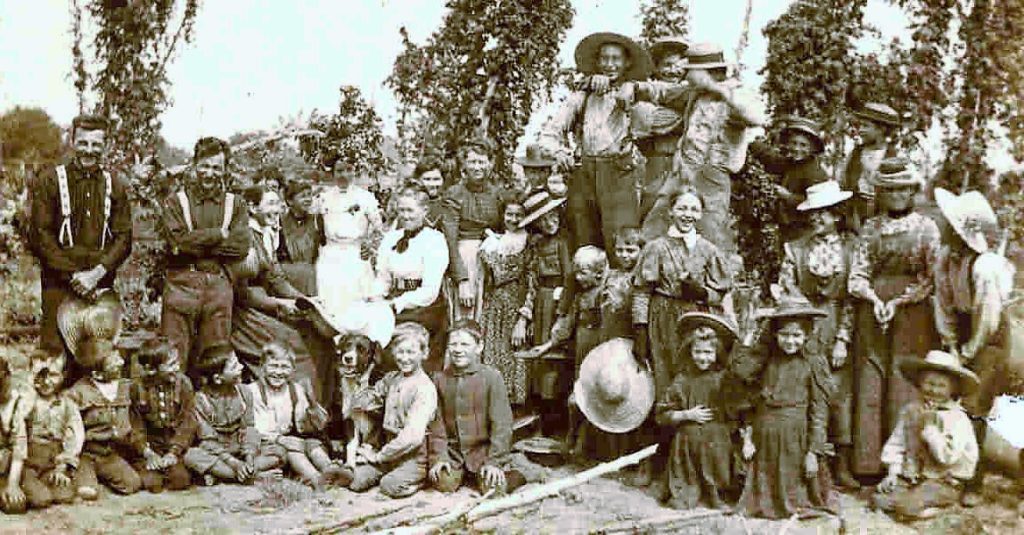 The Franklin Family also farmed hops near Fournier, at the corner of County Road 9 and County Road 16. Submitted Photo