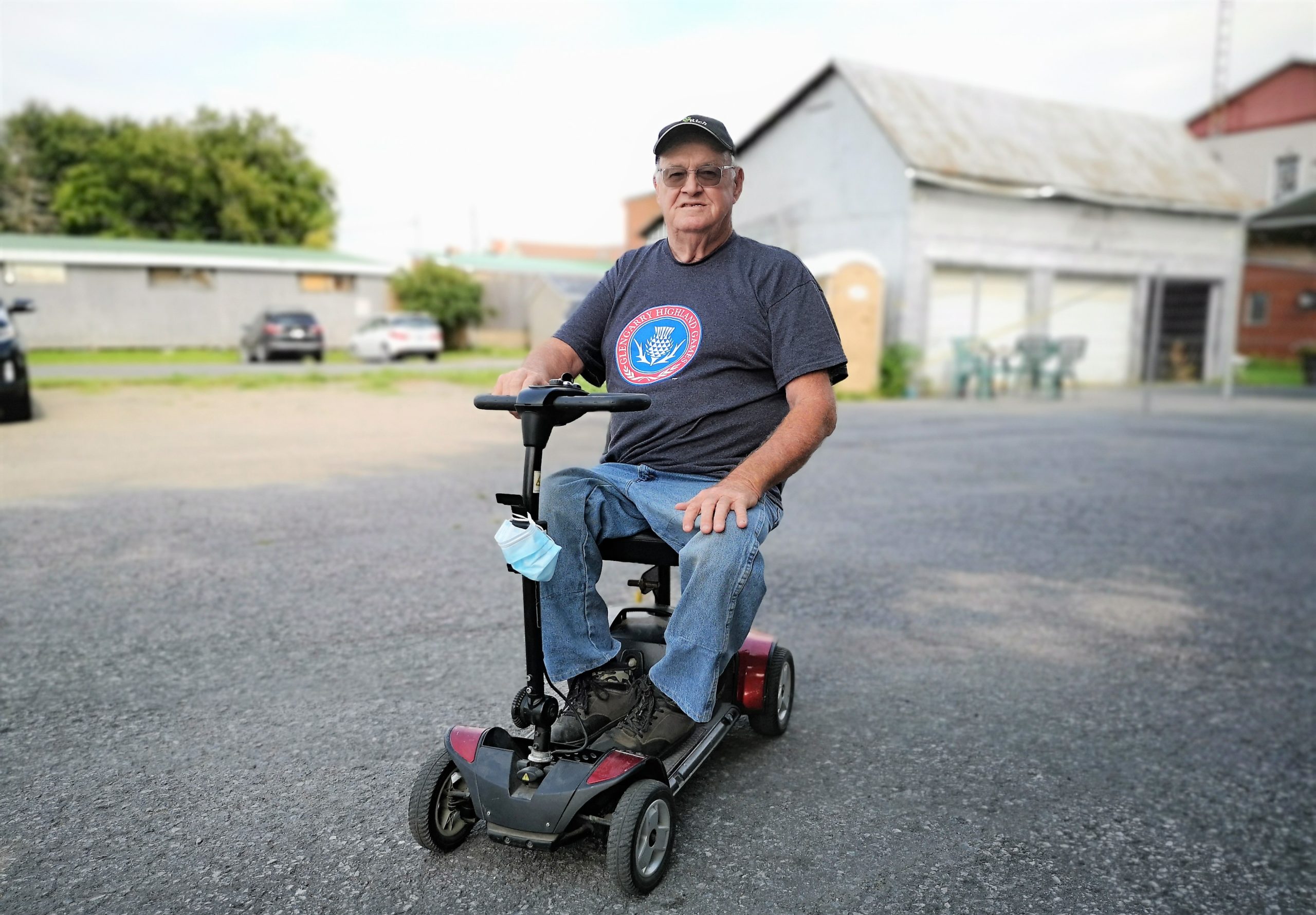 Ian MacDonald was denied access to the EOHU’s COVID-19 vaccination clinic on July 9 at the Glengarry Sport Palace in Alexandria, due to his mobility scooter. Photo by Reid Masson

A Lancaster man who uses a mobility scooter says he is pleased with the response he received from the Eastern Ontario Health Unit (EOHU), after he was denied access to a COVID-19 vaccination clinic in Alexandria last month.

Due to childhood polio, Ian MacDonald cannot walk long distances, so he uses a mobility scooter to get around. In addition to a standard-sized unit, MacDonald has a much smaller scooter that he uses when traveling. He was on his smaller mobility unit, when he was stopped by a private security guard on July 9, as he was trying to enter the Glengarry Sports Palace in Alexandria for his scheduled COVID-19 appointment at the EOHU vaccination clinic.

“The security guard said I would have to get into a wheelchair – I said that’s not going to happen,” said MacDonald, who explained that he does not feel secure in a wheelchair due to his condition.

The Lancaster resident had received his first shot at an EOHU clinic in Cornwall, using his scooter without issues. He was able to schedule a second shot at a pharmacy in Cornwall a few days after being refused entry to the Sports Palace.

MacDonald wrote and mailed a letter to EOHU Medical Officer of Health Dr. Paul Roumeliotis to express his concerns over what happened. As the appointed member for the Township of South Glengarry Accessibility Advisory Committee for Stormont, Dundas and Glengarry (SDG), MacDonald said he felt it was his responsibility to raise the issue. He contacted The Review several weeks after writing the letter, as he had not received a response and did not know if it had been received by Roumeliotis.

The Review forwarded the letter by email to Roumeliotis, who immediately reached out by phone. On August 16, the EOHU’s Medical Officer of Health said he had spoken with MacDonald personally.

“I had a very good talk with the individual, and I explained this was a rare situation,” said Roumeliotis, who emphasized that the EOHU places a high importance on ensuring vaccination sites are fully accessible. “We go out of our way.”

Roumeliotis said the EOHU has changed the location of vaccination sites in some communities, if it found access was insufficient. He added that the EOHU led the way in Ontario, by ensuring people who cannot leave their homes due to physical limitations can receive a COVID-19 vaccination at home through a visit from paramedics. Vaccination clinic personnel have also gone outside to give vaccinations to people who are unable to leave their vehicles and go inside the clinic facility.

Roumeliotis said MacDonald’s letter was the only accessibility-related complaint the EOHU has received.

“If I would have had that response earlier, I would not have gone to the press,” said MacDonald, who added he has visited the Glengarry Sports Palace hundreds of times without access issues. “It’s just that, as a person with accessibility issues, and being a member of the accessibility committee, I take it upon myself to make these issues noted.”

– With files from James Morgan