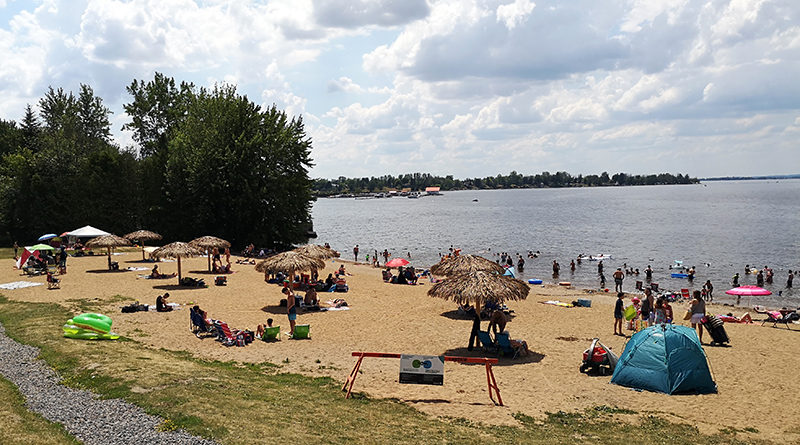 Due to a high rate of water flow along the Ottawa River and its location away from urban centres, L'Orignal Beach is seldom affected by high E. coli levels. Photo by Reid Masson

Swimmers in Prescott and Russell can feel confident in water quality at area beaches, particularly along the fast-flowing Ottawa River, according to a biologist with the group whose research inspired the City of Gatineau to conduct daily testing on its beaches.

A grassroots charity, Ottawa Riverkeeper brings together volunteers, communities, businesses and all levels of government to find solutions to problems that threaten the health of the river. The City of Gatineau recently announced it is now conducting daily water quality tests at all its beaches in response to recommendations made by Ottawa Riverkeeper in a study released in 2020 on the municipality’s beaches. The full report can be found here.

However, a biologist with Ottawa Riverkeeper says the increased testing is a good thing, and beach-goers can feel safe entering the water, particularly along the fast-flowing Ottawa River, where currents break down most organic matter. Pathogens may also persist for less time in a given area due to the rate of flow.

“On the Ottawa River – because it has such a high flow rate – any kind of E. coli or other pathogens are going to be fairly well diluted in the water and are less likely to pose a threat to humans,” says Katy Alambo, biologist with Ottawa Riverkeeper. “Especially in locations like L’Orignal Beach and those rural locations where the populations are not as great, we tend to see much better water quality than we do in urban areas such as the City of Ottawa or Gatineau – so much so that these locations are tested at less frequency.”

The Eastern Ontario Health Unit (EOHU) samples the swimming water at all local public beaches throughout the operating season to ensure it does not exceed the established bacteria levels. If bacteria levels exceed the safe swimming limit, a sign is posted advising people that the water is unsafe for swimming.

In Ontario, the recreational water quality guideline is a maximum of 200 E. coli per 100 ml of water. Occasionally, a public beach may also be posted if the inspector notices floating debris, oils, scum, excessive algae growth, bad odors and turbidity.

Testing is done following Health Canada’s guidelines for recreational water quality. The guidelines outline the methodologies for collecting water samples and testing procedures. There is also a secondary guideline published which addresses non swimmers, who are entering the waters for other activities, such as paddle boarding, where they are unlikely to be submerged or intake water. Those testing standards are set at 1,000 E. coli per 100 ml of water

Locally, the water quality at L’Orignal Beach and all four beaches at Voyageur Provincial Park in Chute-à-Blondeau has traditionally been very good. While testing at beaches on the Quebec side of the river can be less frequent, those in Grenville-sur-la-Rouge and Oka are also considered to be generally safe by Ottawa Riverkeeper.

“The majority of beaches in locations along the Ottawa River do meet these guidelines,” Alambo notes. “Where we tend to see beaches failing more often is more in the urban centres, which is what sparked the report we did with Gatineau last summer.”

“In urban centres, because of the larger populations and increased infrastructure, there is more opportunity for runoff to enter the river. There is also the potential for combined sewer overflows.”

One Ottawa-area beach which has been in the news at times for closures is Petrie Island Beach in Orleans. The issues at Petrie Island occur primarily due to its location in a bay, which reduces water flow in that area of the Ottawa River.

“That bay is going to have a lower flow than out in the main river channel so that’s an opportunity for E. coli to concentrate and grow,” Alambo explains.

With some exceptions, swimmers can feel confident at beaches along the Ottawa River, Alambo says. She does offer some cautions however, such as waiting at least 24 hours after heavy rainfalls before entering the water.

“Even in areas where combined sewer overflow is less of a problem, rainfall is likely to bring more runoff into the river,” explains the Ottawa Riverkeeper biologist, who advises swimmers to avoid areas where large quantities of Canada geese are nesting. “That runoff could not only contain chemicals that are on the ground but also can bring in animal and bird feces.”

Alambo encourages people to get out and swim in the Ottawa River. While a survey done by Ottawa Riverkeeper showed people believe the river is dirty, the organization’s biologist says that is simply not the case.

“Last year we surveyed residents in the watershed and found that 78 per cent of the participants rarely or never swim in the Ottawa River – largely because they think it is not clean enough for swimming,” Alambo says. “In our experience over the years that we have been monitoring water quality in the Ottawa River, that’s just not the case.”

“I think the fact that the Ottawa River is a natural, brown-water river might make it look like it is more dirty to some people. The color of the river is based on organic content in the water – it has nothing to do the water being of poor quality.”

“The Ottawa River is a healthy river and we encourage people to swim and do recreational activities.”

Instead of worrying about water quality, Alambo believes swimmers should focus on water safety whenever entering the Ottawa River, or any other natural body of water. Ottawa Riverkeeper publishes a water safety guide on its website here.

“It is important to remind people that this is a dynamic river system, there are currents and there could be underwater hazards,” Alambo observes. “Keep those things in mind when going out to swim in the river – you’re not swimming in a pool.”

More information on beaches across Canada, including water quality, can be found online at The Swim Guide.