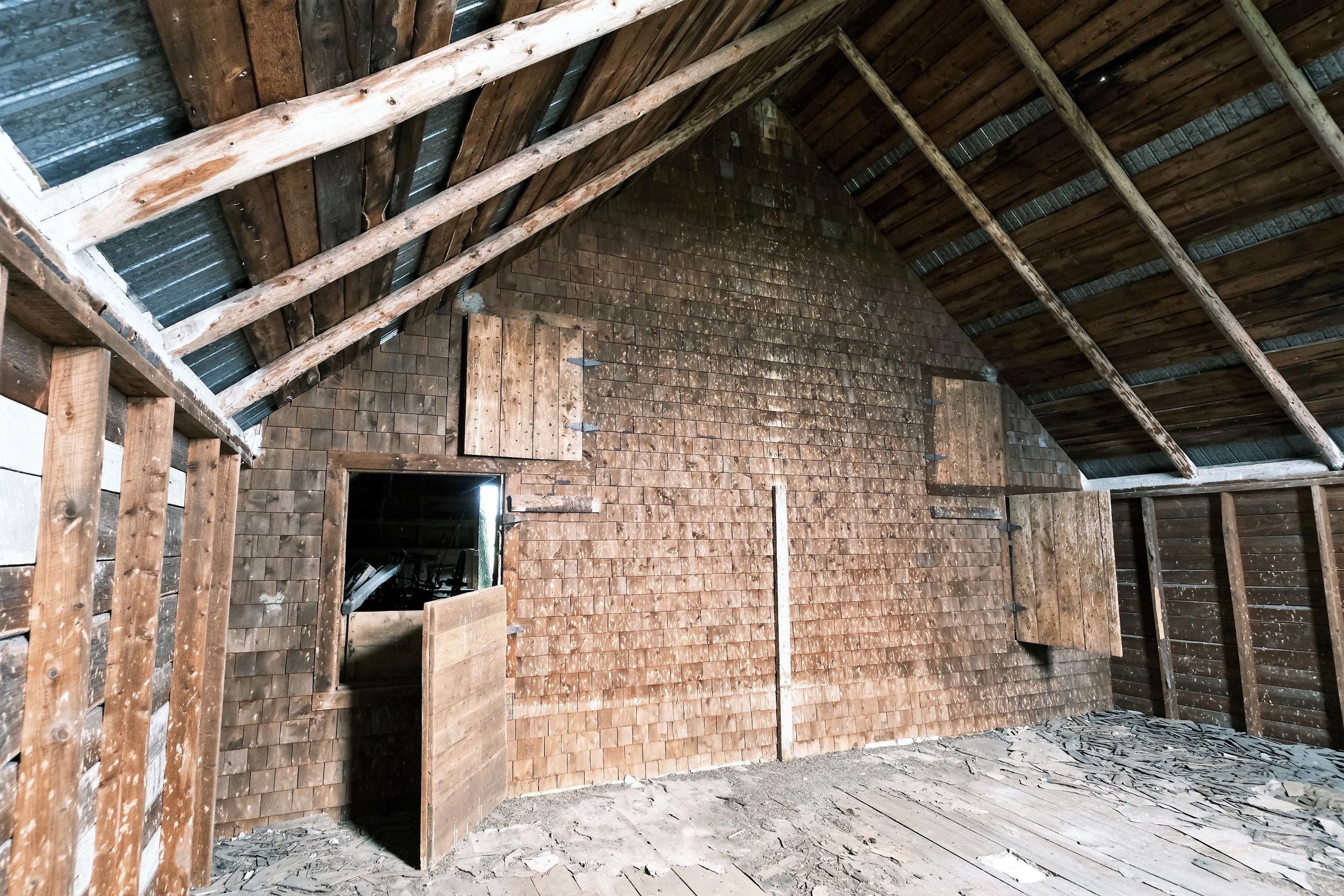 Dried hops in the historic hop houses along Ridge Road (County Road 10) were shoveled to the storage area through two doors. Note the cedar shingles that were used on the middle wall, to keep heat inside the other half of the building, where heating and drying occurred. Photo by André Dumont

In this multi-part series, Review contributor André Dumont takes a look at the historic Hop Houses that used to thrive along Ridge Road (County Road 10), east of the village of Fournier. Many of the hop house buildings are still standing and can be seen during a drive along County Road 10. This week, Part 2 of the series takes a peek inside some of the historic hop houses through photos and an amazing video.

Driving along Ridge Road near Fournier and Riceville at this time of summer once offered totally different views. Until the late 1940’s, most fields were lush green, with hop vines climbing on 15-foot-tall poles. Of that bygone era remain five old buildings, which were used to dry the hop cones.

From outside, these hop houses look like small barns or machinery sheds. Each stands approximately 24×48 feet, are two stories high and feature steep tin roofs. Only one still has its brick chimney extending above the roof. Another one still has its roof vent.

Along Ridge Road (County Road 10), they are all located close to the road, on the north side. Remnants of the bridges that allowed workers to bring the hops directly to the second floor can still be seen.

The original roofs were covered with cedar shingles, as were all outside walls. This is said to have helped to keep the heat inside.

Thanks to owners Pat Sloan and Marc Bercier, The Review was able to sneak inside three hop houses, two on Ridge Road near Fournier and one off of County Road 15. Check out this YouTube video for an even closer look inside the hop houses!

The inside of a hop house is divided in four areas, each with a specific function: heating, drying, storage and baling. All visited kilns still have their original chimneys, but they have been cut just under the roof. An opening for a stove pipe is visible in each chimney.

Most kilns had more than one wood-burning stove. In the Fournier 1867-1992 Parish book, sister Rita Denis mentions that her father’s kiln had four “buck stoves”. No stoves remain inside the kilns that are still standing.

The heating area occupies half of the ground floor of each building. Its walls lie on concrete footings interrupted by vents, that could be opened to create a draft which would force the heated air up to the second floor, where hop cones were spread to dry.

The floor between the heating and drying areas is made with one-by-three-inch wood pieces; lying on their narrow side, with about two inches left open between each piece of wood. That floor was covered with a cheese cloth. About 18 inches of green hop cones were spread over the entire floor.

Ninety-three-year-old St-Bernardin resident Armand Besner remembers the years he worked in a kiln during hop harvest.

“Hops were harvested during the day and brought to the kilns in the evening. They would dry all night,” Besner recalls. “By 2:30 p.m. the next day it was dry. During the night, we had to go and walk through the hops, dragging our feet to stir them so that the green and wet ones didn’t remain on top.”

The work was not fun, Besner says. “We would spend the whole night making fire. It was so hot inside you could only feed one stove each time you entered. You would come out running.”

When the hop cones were dry, they were shoveled through two openings in the kiln’s middle wall. On the other side, the floor was about two feet lower. Hops were stored there until the buyer came with a truck and baler. Hops where then shoveled through a square hole in the floor, into jute bales.

“The heaviest guy would step on the hops to pack as much as possible in the bale,” Besner recalls. “They would then sew the bale with a large needle.”

The baling area was also used as an eating and resting space for the workers, who stayed up all night keeping the fires alive inside the stoves.

In our next print edition, contributor André Dumont will take us back to the time when the hop harvest was a big annual event, drawing hundreds of workers to the Fournier area. 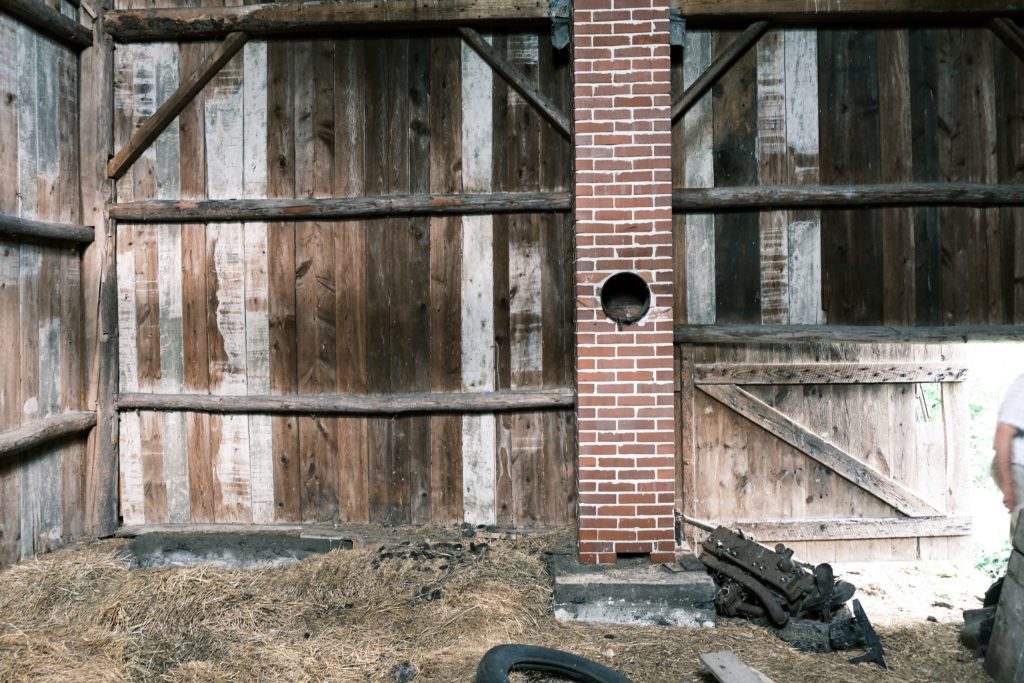 Chimneys are still in place, but stoves have been removed. Two, three or four stoves would be used at the same time. Photo by André Dumont 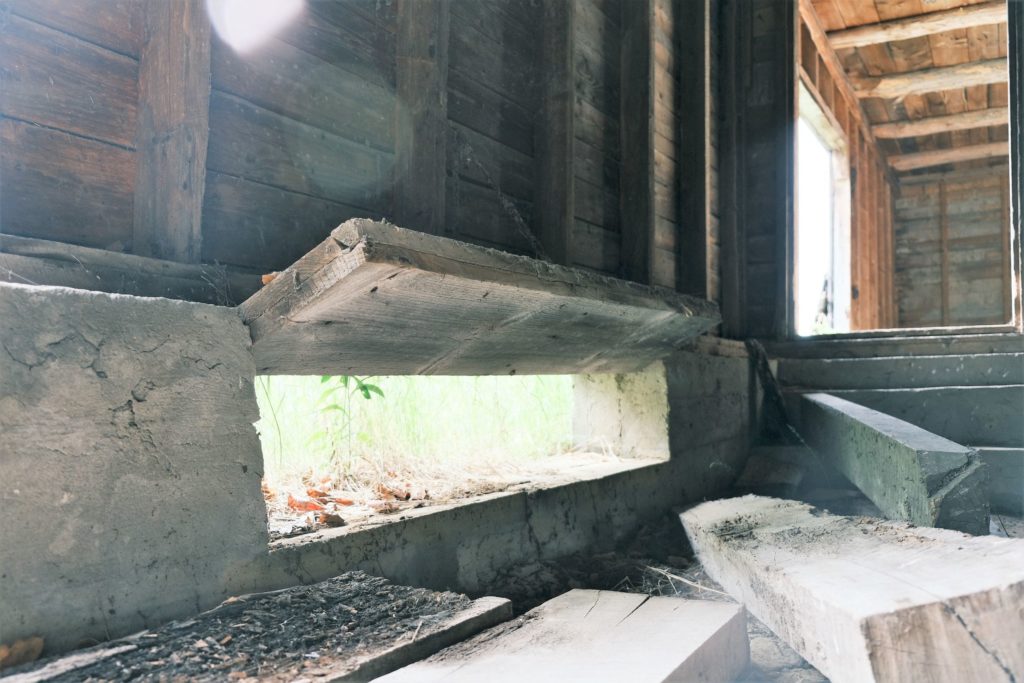 Vents in the hop houses could be opened to force the heat up to the second floor, where hops were spread to dry. Photo by André Dumont