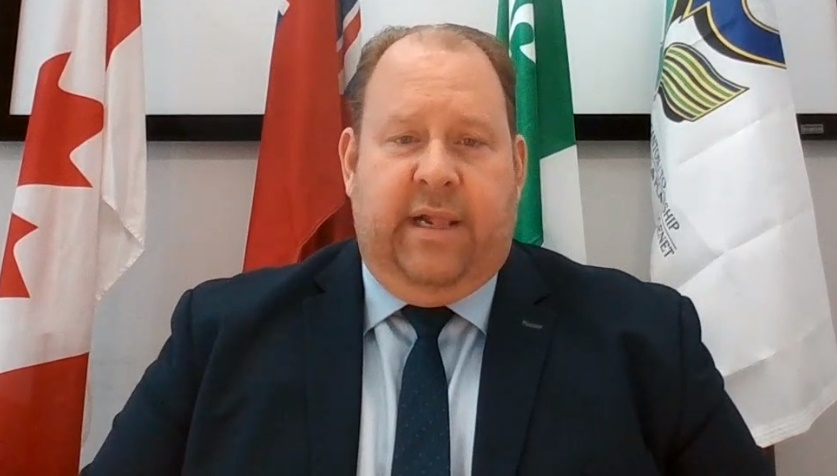 Stéphane Sarrazin is planning to be the next Member of Provincial Parliament (MPP) for Glengarry-Prescott-Russell.

On July 15, the Mayor of Alfred and Plantagenet and current Warden of the United Counties of Prescott and Russell (UCPR) was confirmed as the Ontario Progressive Conservative Party (PC) candidate for the riding in the 2022 provincial election.

The party asked its members across the riding to express if they were interested in seeking the nomination. According to Sarrazin, he was the only party member to seek the nomination.

Sarrazin said he believes he has the support of all mayors across the riding. He believes municipal leaders in the riding have endured a lack of representation at the provincial level during the past 3.5 years.

“I’m really confident,” Sarrazin said, of both the support he expects to receive from other municipal leaders and that many share his opinion on the lack of provincial representation. “They lived it.”

The present MPP for Glengarry-Prescott-Russell is Amanda Simard. She was elected as a Progressive Conservative in 2018, but left the PC caucus in November that year in protest of Premier Doug Ford’s government for having eliminated the Commissioner of French-Language Services and suspended plans for the French-language university campus in Toronto. Simard sat as an independent MPP until joining the Ontario Liberal Party in January of 2020.

Sarrazin said people who normally vote Liberal have told him he will have their vote in 2022.

The newly chosen PC provincial candidate acknowledged the Ford government had some challenges adjusting on francophone issues following the 2018 election. He appreciates the work Caroline Mulroney is doing in her capacity as Minister of Francophone Affairs and has been busy familiarizing himself with government decisions by reading Hansard, the official record of what is said in the legislature.

Mulroney recently visited the riding and announced funding for PR Transpo. She was accompanied by PC MPP’s Jim McDonell and Goldie Ghamari who represent neighbouring ridings.

The next provincial election in Ontario is to be held on June 2, 2022. The next municipal election is on October 24, 2022. Sarrazin said he will possibly seek re-election as Mayor of Alfred and Plantagenet if he is unsuccessful at winning the provincial seat.

“I love my job – we’ve made a lot of changes here at the municipality of Alfred and Plantagenet.”

Sarrazin said he became interested in provincial politics after discovering how so many aspects of municipal government are influenced by provincial policies and decisions. Sarrazin wants to help make changes at the provincial level.