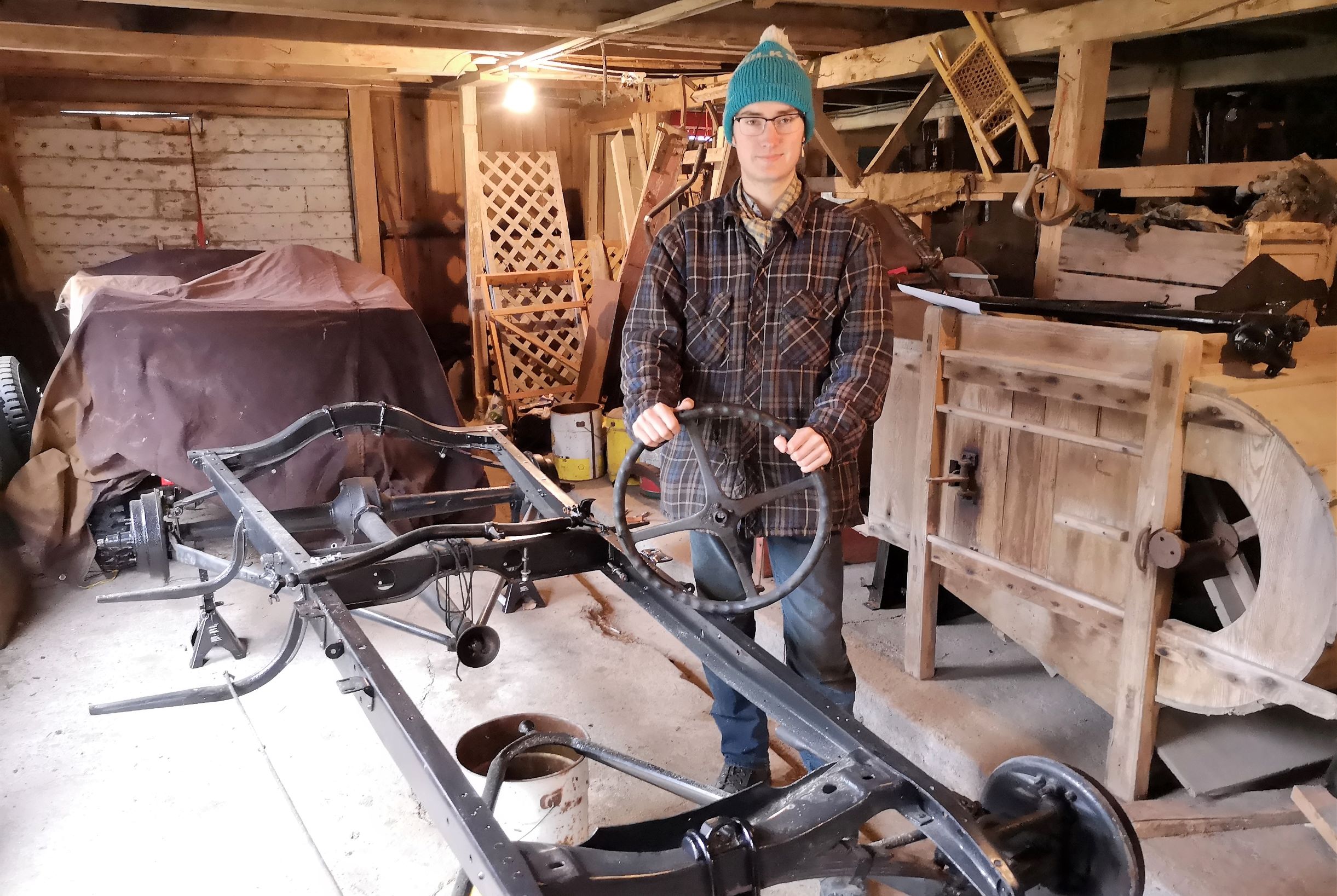 Vankleek Hill’s Clay MacWhirter with the Model A frame he is the process of restoring. Photo by Reid Masson

Clay MacWhirter has found the perfect car to match his love of all things old. The 21-year-old is currently hard at work on a frame-up restoration of a vintage Model A Ford, which he hopes to have running by next summer.

“I’ve always loved old stuff in general – you can’t beat the quality,” MacWhirter says of his affection for all things old and mechanical. “You can find parts, what breaks . . . you can fix.”

The vintage automobile enthusiast, whose parents are Scott and Tara MacWhirter of Vankleek Hill, was originally looking at an even older Model T Ford, before being talked out of it by his neighbor Bob Macdonald, who owned a Model A. Macdonald pointed out the Model A was a huge improvement over the original mass-production T car and would be far easier to drive on area roads.

“The Model T could only go about 50 to 60 kilometres per hour,” explains MacWhirter. “The Model A was a much more modern car.”

MacWhirter’s vehicle – which will be somewhat of a jumble of parts from different years – is based on the 1927-31 Model A version, which came with a four cylinder engine. In 1932, Ford introduced its first V8 engine and the company moved into higher performance models, in what became known as the ‘Bonnie and Clyde years’. MacWhirter describes the Model A – which was a huge success for Ford and sold almost 5 million copies – as a “transition car”.

“It was very modern, but there are still aspects of the older designs, such as the cross-leaf springs – like in the old buggy days,” explains the young restoration buff, pointing out the huge leaf springs at the front of the car’s bare frame. “Instead of springs going with the wheels, you have two leaf springs which go cross-ways across the car in the front and the back – the centre of the car rides on it like an old carriage would.”

After pondering a Model A restoration since his mid-teens, the mechanical engineering student at Carleton University accidentally stumbled across some people who could help with the project. He was driving south of Ottawa when he got lost and suddenly found inspiration at the same time.

“I took a wrong turn on the highway and I was going through North Gower when I passed about seven Model As – every different type – pulled over on the side of the road,” relates MacWhirter, who turned around and drove back to the group as quickly as he could.

The group was the Model A Club of Ottawa – Canada’s Capital A’s – and the members were more than happy to speak with MacWhirter about their vehicles. As it turned out, one of them had an almost complete Model A – frame, engine and running gear, but no body – he was willing to sell.

Beginning the project this past summer, MacWhirter now has the frame, axles, suspension and brakes assembled. Four wheels have been restored with new tires, and the engine and transmission are next on the list. He expects to have the running gear all assembled and ready to drive sometime next year. The biggest issue now is finding a body.

“I could drive it, but it wouldn’t look like the traditional Model A (without the proper body),” says MacWhirter, who intends to find an ‘A’ pickup truck body for the project – one of the hardest to find of the vehicle’s body styles. “I have a lead on one, but it’s expensive.”

His restoration project received a big financial boost recently when MacWhirter was named as a winner of the 2020 Youth Restoration Award from The Model “A” Restorers Club and the Model A Club of America. With the award came a prize of $2,500 in gift certificates to go towards parts for his restoration. MacWhirter was nominated for the award by the Canada’s Capital A’s club he had discovered on the side of the road two years earlier. The complete list of 2020 winners can be found here.

“I hope to have it running by next summer,” says MacWhirter, who will be working on his project all winter in the unheated barn where he has the vehicle stored. “After that it will be just working on the body to get the right look.”

While the Model A will be ready to drive next summer, the entire project to get it restored fully with the truck body installed is expected to take up to three years. Once completed, he intends to keep the car as his own personal vehicle and use it to cruise around the area on a regular basis. “I’ll maybe take a run down to Tim Horton’s now again, or just drive around.”

The Model A project is just the latest restoration effort for the 21-year-old, who has created both a working blacksmith shop and a replica of a general store on his property. Over the years he has brought back to life all kinds of antiques, from accordions to vintage mechanical machinery, although he is modest when someone calls him a restorer.

“I prefer the term ‘fixing up’,” MacWhirter says with a grin, explaining he rebuilds items to work, not to be pretty. “My thought process is when something is restored, I have a hard time using it. I like to fix up things so that they work, but I’m not afraid to use them.” 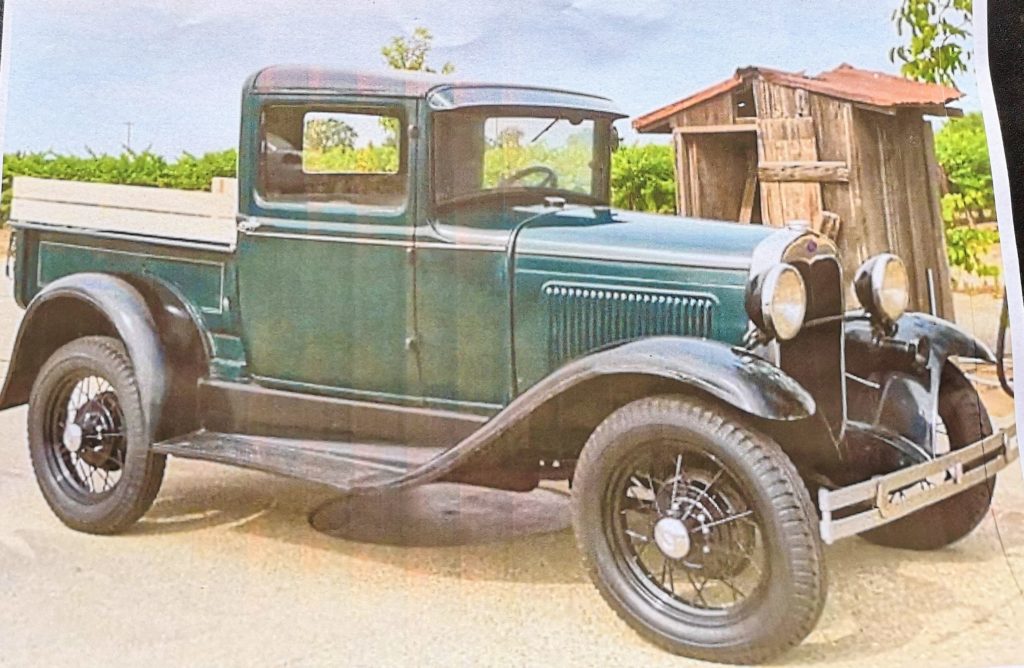 MacWhirter’s image of the Model A pickup truck he hopes to replicate. 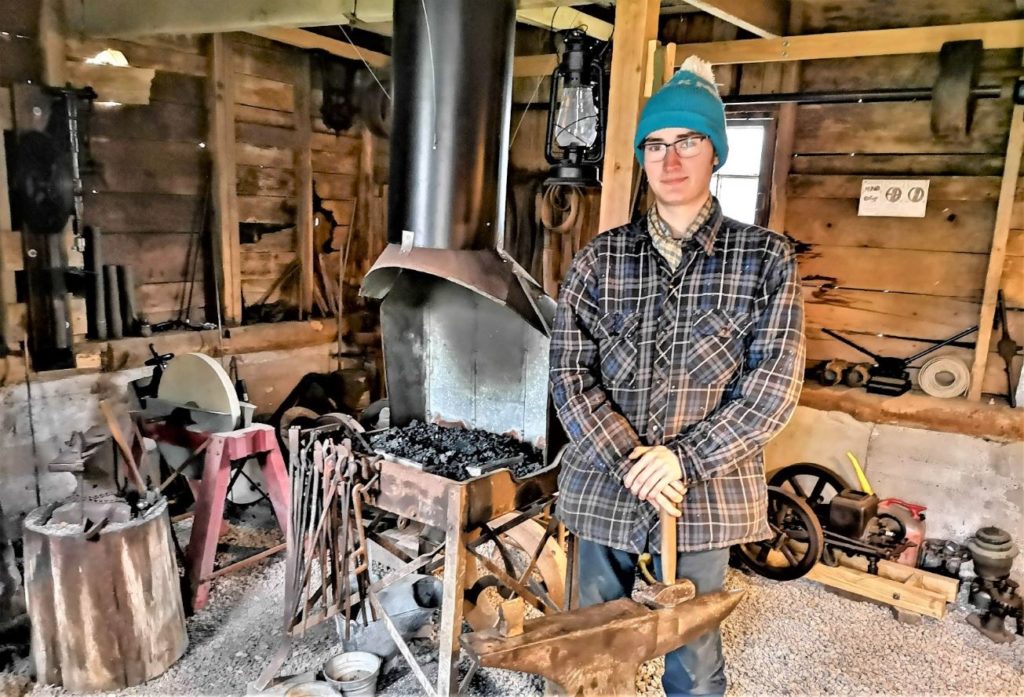 Clay MacWhirter in the blacksmith shop he created in an abandoned building on the family’s farm. Photo by Reid Masson 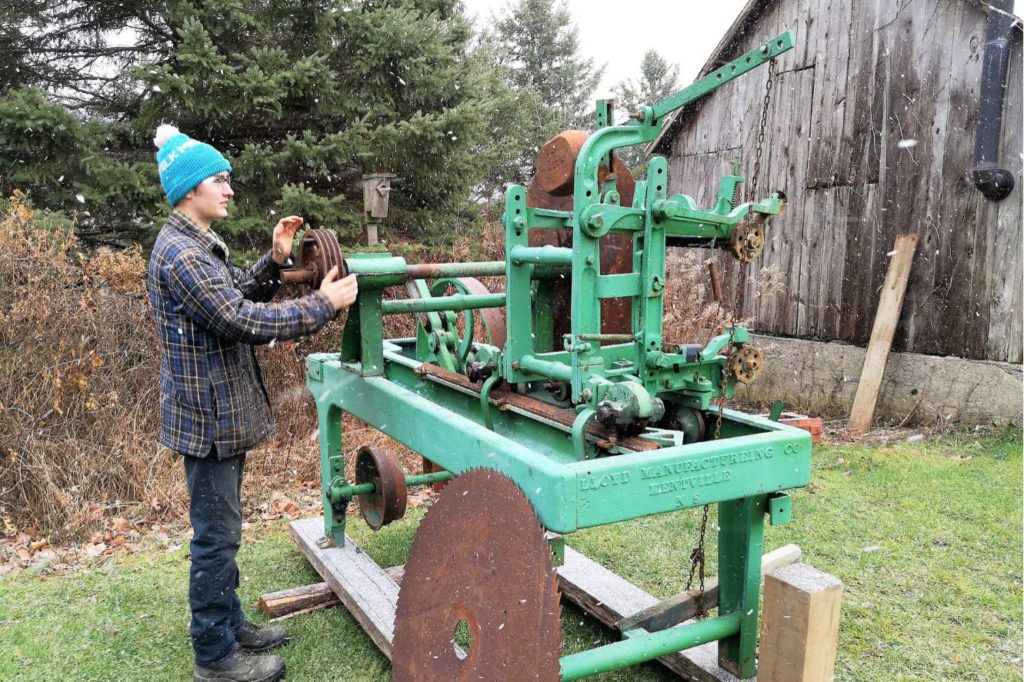 One of Clay MacWhirter’s current projects is the restoration of this turn-of-the-century machine used to make cedar shingles, which he will be restoring with the help of his father Scott. Once completed, the father-son team plan to use the device to make shingles for buildings on the property. Photo by Reid Masson