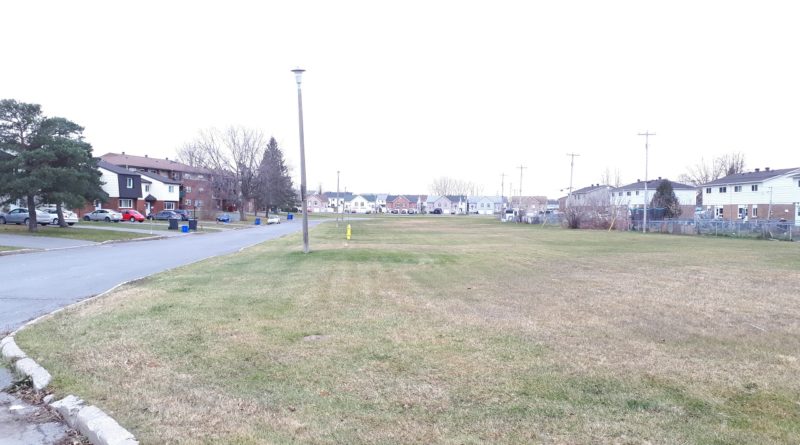 This vacant land in Hawkesbury has been declared surplus by the UCPR and will be sold. Photo: James Morgan

The United Counties of Prescott and Russell (UCPR) is selling surplus land near public housing sites in Hawkesbury.

On October 28, UCPR Council approved a recommendation from the Department of Social Services to declared lots 29 to 72 on Portelance and Taché Streets surplus and to sell all lots except for 29, 30, and 31.

According to UCPR Director of Social Services Sylvie Millette, the counties took possession of the land in 2000 when the public housing system was transferred from the Ontario Housing Corporation, the provincial agency which used to own and maintain public housing across the province.  Millette said that the UCPR unsuccessfully tried to sell the land in 2008.

The land has been vacant since the surrounding public housing development was constructed by the former provincial agency.  Millette said she is not aware if more public housing was ever planned for the vacant land.

“It seems there was no specific land to build more public housing,” she said.

Millette explained that the UCPR Social Services Committee recently discussed the vacant property and recommended that the lots be evaluated and sold.

There is the potential for the UCPR to receive $2,150,000 in revenue if all lots are sold.  The revenue would be reinvested in housing services of the social services department, as required by Ministerial Directive under the Housing Services Act.

The land will be listed on the commercial real estate market according to the UCPR’s procurement policy.  Millette said that the counties will draft a request for proposals (RFP), and post it on its online bids and tenders platform.  A realtor will be selected through the RFP process.

The current zoning of the land allows for mid-density residential development.