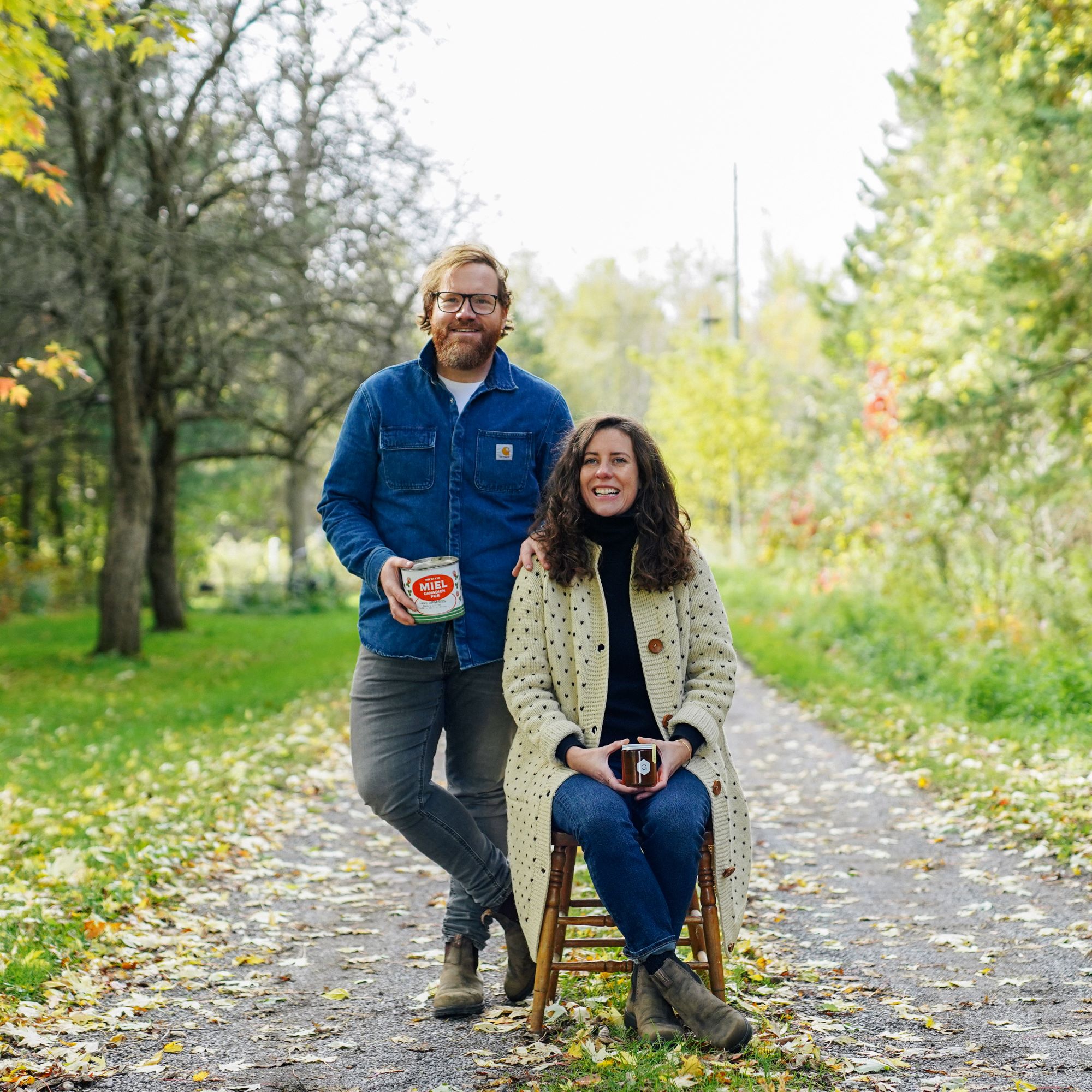 Russell Gibbs and life partner Andrea Glenn made a number of life-changing decisions in opting to take over the operations of Gibbs Honey.

It’s a scenario one would expect in a television show such as Green Acres – a young couple decides to leave city life behind, move to the country and buy a farm, despite little experience – cue the drama and hilarity.

“We decided we’d throw it all in – all at once – move five hours down the 401, have a baby and buy a farm,” laughs Russell Gibbs, who along with his partner Andrea Glenn owns and operates Gibbs Honey in Vankleek Hill.

In real life, teamwork and commitment overcome fantasy. Russell and Andrea, who met online and were dating via a semi long-distance relationship for two years, have learned a lot since they decided to purchase Gibbs Honey from Russell’s uncles Tim and Peter Gibbs three years ago. At the time, Russell was working as a graphic designer and owned a house in Hamilton, while Andrea was a literary agent living in a condominium in Toronto – a far cry from rural life.

“I think when you both want to do something, you make it work,” Andrea reflects. “For some people who grow up with it, some of the things might feel like a chore. But we made a conscious decision to do this and we feel lucky to have some of the challenges – that’s what we signed up for.”

The Gibbs family has been beekeeping and making honey for four generations on the family farm on Gibbs Road in Dalkeith, since Russell’s great-grandfather Albert Gibbs first started keeping bees in 1925 to provide honey for his family. By 1934, Albert’s son Michael had taken an interest and began selling honey off the farm and to local stores in the region – eventually building up to 150 bee colonies.

In 1978, a third generation of beekeepers took over the farm when Michael’s sons Tim and Peter – who had each been keeping bees and selling honey individually – joined forces. The brothers turned Gibbs Honey into a commercial business, expanding over time to 1,300 colonies.

Although his father David had moved away from the family farm and raised own his family in Kitchener, honey runs deep in the veins of the Gibbs family. Russell began keeping bees himself on a friend’s rural property outside of Hamilton in 2011. By 2016 he had scaled his operation up to 30 colonies and was selling his own licensed version of Gibbs Honey at markets in the Hamilton area.

About that time, Russell’s eye turned towards the family Gibbs Honey operation in Dalkeith run by his uncles, who were getting up in age. In 2017 he brought Andrea with him for a family visit and she saw the area for the first time.

“It was a fortuitous thing one summer where we actually just decided to come up and visit Vankleek Hill, because we had never been here together,” remembers Andrea, who was immediately struck by the beauty of the region and the activity in town. “We came here the weekend of Trash ‘n’ Treasure and were were like ‘What a great town!”

The young couple started looking at properties that weekend and within a couple of months had purchased a 111-acre farm on MacCallum’s Lane, south of Vankleek Hill. From there, things moved very quickly, as Tim and Peter Gibbs were ready to retire, but had been holding out on selling the business in the hope someone from the Gibbs family would step forward.

“I don’t think they really thought there was much of a possibility of anyone taking over the business, so it all just kind of came together and they were so grateful for the opportunity to keep it going and in the family,” Andrea recalls.

“It would have just been sold off piece by piece and then (Gibbs Honey) would have sort of just ended,” believes Russell, the fourth-generation namesake of the business. “That was also a big part of our decision – that it had been in our family so long.”

Shortly after purchasing Gibbs Honey during their life-altering summer of 2017, Russell and Andrea moved the business to their new home on MacCallum’s Lane. Since then, the couple has worked hard at growing the business, expanding what was primarily a bulk operation into a balance between wholesale and retail sales.

“The business was very much on the commercial side, selling bulk honey and barrels, whereas our idea is to be a little more 50/50 between bulk and retail,” notes Russell Gibbs.

“We obviously want to continue the work that Russell’s uncles have been doing, but we also want to grow the business,” Andrea adds. “We want to work more with retailers on jars of honey and work with chefs to supply honey in restaurants.”

“A time capsule of the land and the season”

The owners of Gibbs Honey are also looking to expand the company’s visibility in agri-tourism and have planted acres of wildflowers on their property for future visitors to admire. Although plans for tourism visits on the MacCallum’s Lane property have been temporarily derailed by the COVID-19 pandemic, they are hoping to partner with other local producers for on-site events and dinners.

“We are interested in working with other beekeepers to introduce people to the concept of honey-tasting, much like you would taste wine, or coffee,” Andrea says. “There’s just such a wide variety of tastes among honey – it’s really like a little time capsule of the land and the season.”

For Russell and Andrea, the dream of owning a family business and living in the country has been a life-changing experience. It not only moved their relationship forward, but resulted in the birth of a son two years ago, who may one day become the fifth-generation operator of Gibbs Honey. And the idea of escaping the city turned out to be not as crazy as Hollywood would have one believe, although it was not without some adjustments.

“For us, the big challenge has been stuff like equipment maintenance,” Andrea says, breaking into laughter. “Russell knows beekeeping and we have a pretty good handle on the business side, but we don’t know how to fix a tractor! You learn as you go – it’s frustrating and fun at the same time. But that’s the kind of challenge we wanted to sign ourselves up for.”

“Producing a product that people really love is incredibly rewarding”

“The ability to work with nature – the bees are incredible – and producing a product that people really love is incredibly rewarding,” Russell enthuses, adding local farms have been extremely receptive in allowing Gibbs Honey to locate colonies on their properties. “It’s a great experience for us to meet and collaborate with other producers.”

“The community has been extremely welcoming to us,” Andrea says gratefully. 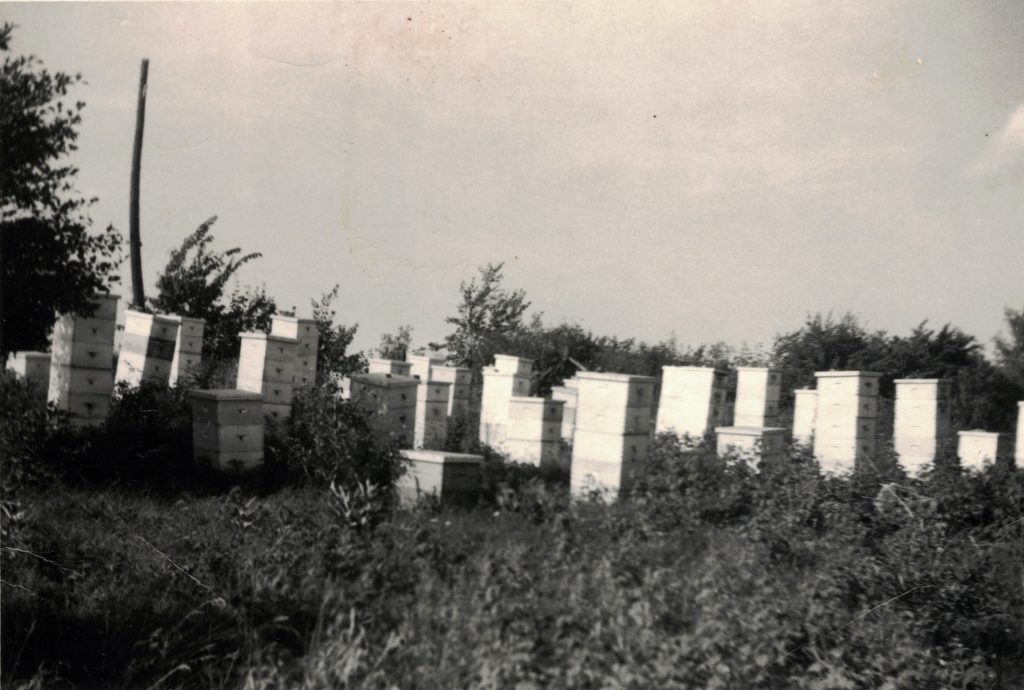