At 12:01 a.m. on Monday, November 16, the Eastern Ontario Health Unit (EOHU) will again become an orange zone under Ontario’s COVID-19 response framework, even though the number of active cases in its jurisdiction is decreasing.

“Our numbers are actually going in the right direction,” said EOHU Medical Officer of Health, Dr. Paul Roumeliotis on Friday.

“Honestly, I’m a bit frustrated,” said Roumeliotis, who added that he told the ministry of his disappointment in the move to orange for the EOHU, even though cases are decreasing.  However, he did say he understands the reasoning and believes that the province wants to be sure that there is a sustained decrease in the number of cases.

“There are not that many big differences between the yellow and the orange zones,” Roumeliotis emphasized.

For example, in orange zones, restaurants and bars must close at 10 p.m. and alcohol must not be served after 9 p.m.  The maximum number of people allowed in a fitness facility or sports arena is 50 with no spectators, and no more than 50 people are permitted in other event spaces.  Customers must be screened for COVID-19 symptoms upon entering all retail stores, and services where masks must be removed are not permitted.  The maximum number of people allowed inside an entire movie theatre building or performing arts facility is 50.

Roumeliotis said that the province will review the situation for the EOHU during the week ahead and then decide if there can be a change from orange, back to yellow.

As of November 13, the number of deaths in connection with the COVID-19 outbreak at the Prescott and Russell Residence in Hawkesbury remained at 19. Out of the 97 cases in residents, 74 were resolved, and out of the 62 cases in employees, 57 were resolved, leaving 23 active cases among residents and five active cases among employees.  That means there were a total of 28 cases still active at the Prescott and Russell Residence on November 13 out of a cumulative total of 159 cases.

Roumeliotis explained that 12 of the 19 deaths at the Residence have resulted directly from COVID-19.  He said that the other seven deaths were in residents with other conditions who also contracted COVID-19.

The only other COVID-19 outbreaks in effect at long-term care or retirement homes under EOHU jurisdiction as of November 13 were at Russell Meadows Retirement Home in Russell and at Open Hands-Ridgewood Drive Site group home in Cornwall.

Six patients from the EOHU’s jurisdiction remained in hospital due to COVID-19 as of November 13.  No patients were in intensive care.

As of November 13, 78,534 COVID-19 tests had been performed at the EOHU’s six testing facilities and by paramedics.

According to the Government of Ontario list, there were active cases of COVID-19 at the following schools under EOHU jurisdiction on Friday, November 13.  Two or more cases per school is considered an official outbreak.

One student at École élémentaire catholique Saint-Viateur in La Nation

The Government of Ontario list reported active cases of COVID-19 at the following childcare facilities under EOHU jurisdiction on Friday, November 12.  Two or more cases per childcare facility is considered an official outbreak.

One employee at The Learning Centre-Longue Sault in Long Sault

One employee at Kawehnoke Child Care Centre in Akwesasne

The Ministry reported that 76,238 or 83.6 per cent of cumulative cases were resolved as of November 12.

There were 452 COVID-19 patients in hospital across Ontario as of November 12.  Out of those 452 patients, 106 were in intensive care, and 67 patients were on ventilators.

There had been 3,312 deaths due to COVID-19 across Ontario as of November 12, composing 3.6 per cent of all cumulative cases.

Active COVID-19 cases across the EOHU by municipality and First Nation, as of November 13, 2020. 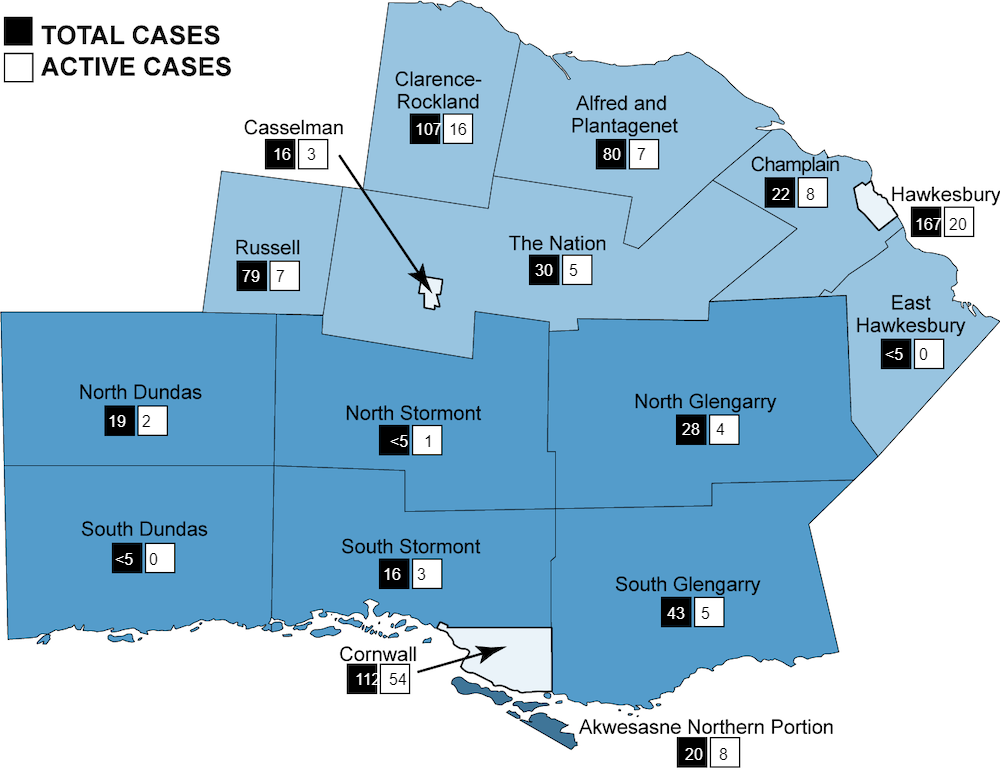