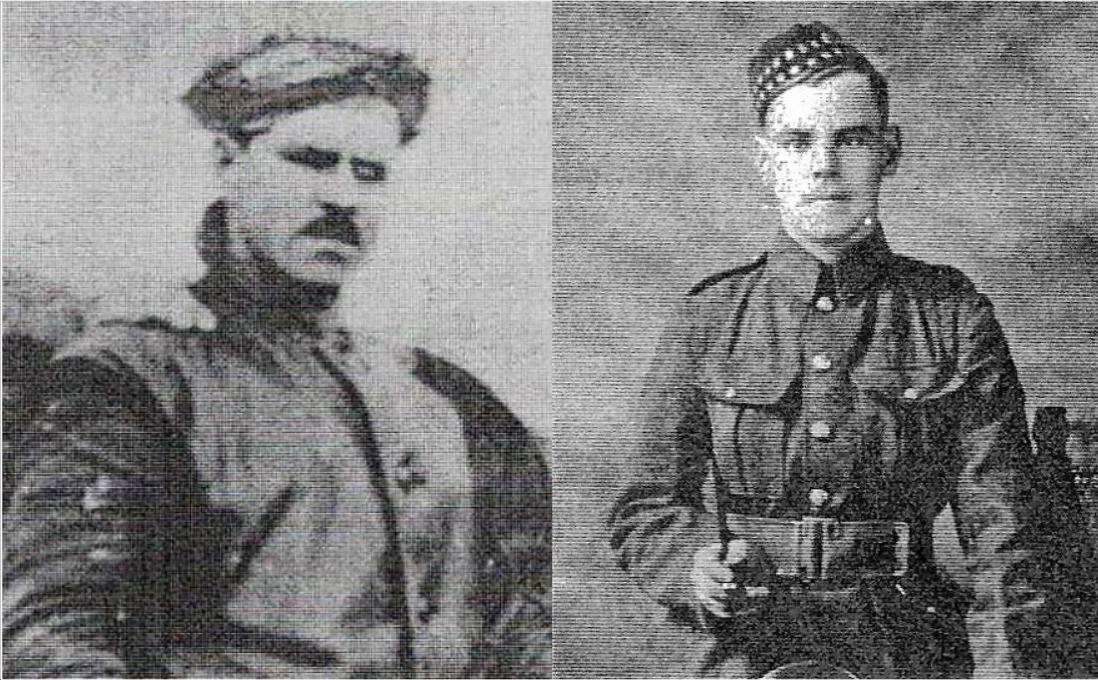 Lieutenant Howard J. McLaurin (left) and his brother Pte. Douglas McLaurin were both killed in action in the spring of 1916. A third brother was wounded the same year, but survived World War 1. Photo courtesy of the Vankleek Hill Museum

As time passes, memories of war fade — especially as war veterans are no longer with us to tell their stories. Many of these stories are chronicled in books and in films. But The Review contains many of those stories, too, as they were happening. What follows is a snapshot in time, as we follow one family and how their unfolding story was shared with their community in the pages of The Review.

During his search through Review archives, writer Reid Masson discovered countless tales of bravery, letters from soldiers to home and updates on the war effort from 1914-1918. This is the story of the McLaurin family – the first Vankleek Hill family to lose two brothers in the Great War.

The reality of the battlefields in Europe during the First World War hit Vankleek Hill hard in the spring of 1916.

From the time war was declared on August 7, 1914, the Eastern Ontario Review had been publishing updates on the war efforts, both nationally and locally. There were letters sent home from soldiers shared in the paper, updates on who had volunteered and the somber updates of those who had been wounded or killed in action. By the beginning of 1916, news from the battlefield had become routine and with the war far away in Europe, the newspaper had largely returned to local news. But as winter turned to spring, casualties were being reported among the young Vankleek Hill men serving overseas.

Douglas McLaurin signed up for service in September of 1914, shortly after the war broke out. The 22-year-old son of Mr. and Mrs. John R. McLaurin was one of the first of many local young men to join, and one of the first sent overseas. Douglas was also one of the first casualties, as The Review reported on May 7, 1915. Word had been received that both he and fellow Vankleek Hill soldier Tom Sample had been wounded in the ‘big fight at Flanders’. The families of both men were nervously awaiting word on their condition.

A week later, news came that the men had written to their families and were chomping at the bit to get back to the front. Douglas McLaurin was particularly descriptive in his letter home, which was published in its entirety in The Review.

“We were in action north of Ypres and I got wounded in the shoulder by a bullet, but I expect to be back in action in a day or two. What they sent me down here for I can’t imagine. As far as the fighting goes it was hell and I am lucky to be alive… Don’t worry about me as I am going to get through all right and some more Germans will meet my rifle fire and I hope some of them will get to know the feeling of my bayonet. The sooner I get back to the trenches the better I will be satisfied.”

By this time, Douglas had been joined in the field by his brothers Howard and William ‘Billie’ McLaurin. Casualties were increasing in Europe and by 1916, many families were receiving news of family members killed or missing in action. Douglas McLaurin was one of the first of the Vankleek Hill volunteers to fall, as reported in The Review on April 21, 1916.

“Somewhere in France with a little white wooden cross over the grave to mark the spot rests the remains of Pte. Douglas Cameron McLaurin, son of Mr. and Mrs. John R. McLaurin Sr, of this town…. His death will not be in vain. His place among the Highlanders he loved will soon be filled and many more brave Scottish Canadians will step forward to take up the fight where Douglas fell… Particulars are lacking and we all wait anxiously to hear just how our young fellow citizen met his end.”

A week later, the particulars arrived in a letter from Douglas’ brother Lieutenant Howard McLaurin to his family.

“On Tuesday last Mr. John R. McLaurin received a letter from his son Lieut. Howard McLaurin, 16th Scottish battalion. Howard writes an intensely touching letter to his parents and mourns with them in the loss of as brave a soldier as has fallen in France. Douglas was wounded on April 3 by a splinter of shrapnel which penetrated his helmet. He was on his way to warn some comrades that they were in danger. He lived for a couple of days although he was unconscious except for one moment when he exclaimed “Oh God, my Father.” He was buried in a little grave ‘Somewhere in France’.”

But for the McLaurin family and the people of Vankleek Hill, the worst was yet to come, as Howard McLaurin would be killed in action only two months after his brother. An article in The Review’s June 23, 1916 edition detailed the devastating news:

“The people of Vankleek Hill were greatly depressed last Friday evening and on Saturday when the word was passed around in whispers that Lieut. Howard J. McLaurin, a second son of Mr. and Mrs. John R. McLaurin had been killed in action “Somewhere in France” on June 14th. Citizens simply could not realize the sad truth — and even yet the entire community is depressed because of the news. It is only too true. Howard now sleeps with his younger brother Douglas ‘Somewhere in France.’ Word from the Military authorities informs the parents that he was wounded on June 5th, wounded again on June 12th and killed in action on June 14th. It seems very hard to believe that two of the finest young men in one of the finest families in town should be called to make the great sacrifice. A third son ‘Billie’ is now in France and it is to be sincerely hoped that he too may not be called upon to lay down his life in this awful slaughter.”

Two weeks later the town was dealt another emotional blow from correspondence written by Howard McLaurin to his parents just three days before his death. The Review noted that the correspondence was almost too sad and sacred for publication but it was such a beautiful letter that the paper encouraged the McLaurin family to allow it to be published.

“June 11th, 1916. My Dear Mother and Father. We are going into a rather big affair and in the course of a few days it may be that I will have received my call to join the ranks of those that have gone. I want you not to mourn for me if that should be the case. I am quite prepared to go and shall see Douglas when I get there. Give my best love to all the children and any friends of mine. Thank you all for your goodness to me and regretting to be the cause of any sorrow to you. I am Your Loving Howard”

The loss of Howard was the final one for the McLaurin family, although several other local families lost multiple members during the Great War. The Barton, Laviolette and MacDonald families in Vankleek Hill each lost two brothers before Germany surrendered to the Allies on November 11, 1918.

William ‘Billie’ McLaurin – the third son of John R. McLaurin to serve in the First World War – returned home to his family, but was seriously wounded at least twice. The McLaurin family was rocked again in 1916 – the same year that both Douglas and Howard were lost – when William was wounded by a gunshot to the knee. It was not his only brush with death during the war. On September 6, 1918 – just two months before the end of World War 1 – The EO Review reported that Pte. W.F. McLaurin, son of John R. McLaurin “was gassed and is in hospital in Rouen, France.”

William McLaurin died in 1969 and was interred at Greenwood Cemetery in Vankleek Hill. His brothers Douglas and Howard are buried at Lijssenthoek Military Cemetery, Belgium.