As of Tuesday, August 18, the Eastern Ontario Health Unit (EOHU) reported 180 cumulative cases of COVID-19 across its territory since the beginning of the pandemic.  That number was unchanged since August 14.  Out of the 180 confirmed cases, 165 were considered resolved.

One COVID-19 patient from the EOHU’s territory remained in hospital as of August 18 and no patients were in intensive care.

For 11 weeks, the number of deaths due to COVID-19 within the EOHU’s jurisdiction has remained unchanged at 11.

There were no COVID-19 outbreaks at long-term care facilities and group living institutions across the territory of the EOHU as of August 18.

On August 17, EOHU Medical Officer of Health Dr. Paul Roumeliotis said that the health unit continues to work on return to school plans with school boards and child care facilities across the region.  Roumeliotis acknowledged that there are inconsistencies between the plans school boards with respect to attendance schedules and student activity but he would not rate any of the plans the boards have made.

“I can`t say one is better than another,“ Roumeliotis said, explaining that all of the plans focus on the basics of physical distancing and maintaining separate cohort groups for students.  He said that he would prefer that students wear masks while part of the separate cohorts they will be part of while traveling on school buses.

Roumeliotis said he cannot predict how severely any second wave of COVID-19 may affect the communities across the EOHU territory. `

Roumeliotis is encouraged by the low case numbers locally and the continuing decrease of cases across Ontario.  However, he reminded local residents to keep following the rules to prevent new cases.

“It’s the community numbers that will drive what we do with progressing with reopening,” he said.

The Medical Officer of Health also echoed remarks recently made by United Counties of Prescott and Russell Warden Pierre Leroux and said that the state of emergency covering it, Stormont, Dundas, and Glengarry counties, and the City of Cornwall will likely be lifted during the week ahead.

As of Monday, August 17, the Ontario Ministry of Health had recorded a cumulative 40,870 confirmed cases of COVID-19 across the province, which was an increase from 40,459 confirmed cases on August 13.  However, 37,126 or 90.8 per cent of those cases were resolved, which means that 3,744 cases were active across Ontario.

There were 41 COVID-19 patients were in hospital across Ontario on August 17, which was unchanged from August 14.  Out of those 41 patients, 15 were in intensive care, and 10 patients were on ventilators.

There had been 2,793 deaths due to COVID-19 across Ontario as of August 17, which was an increase of five deaths from August 14. 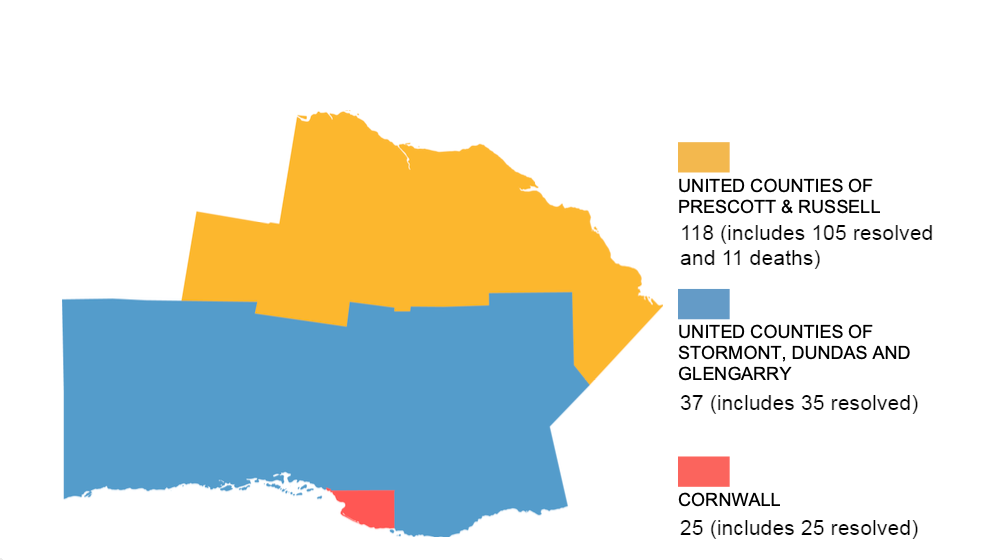