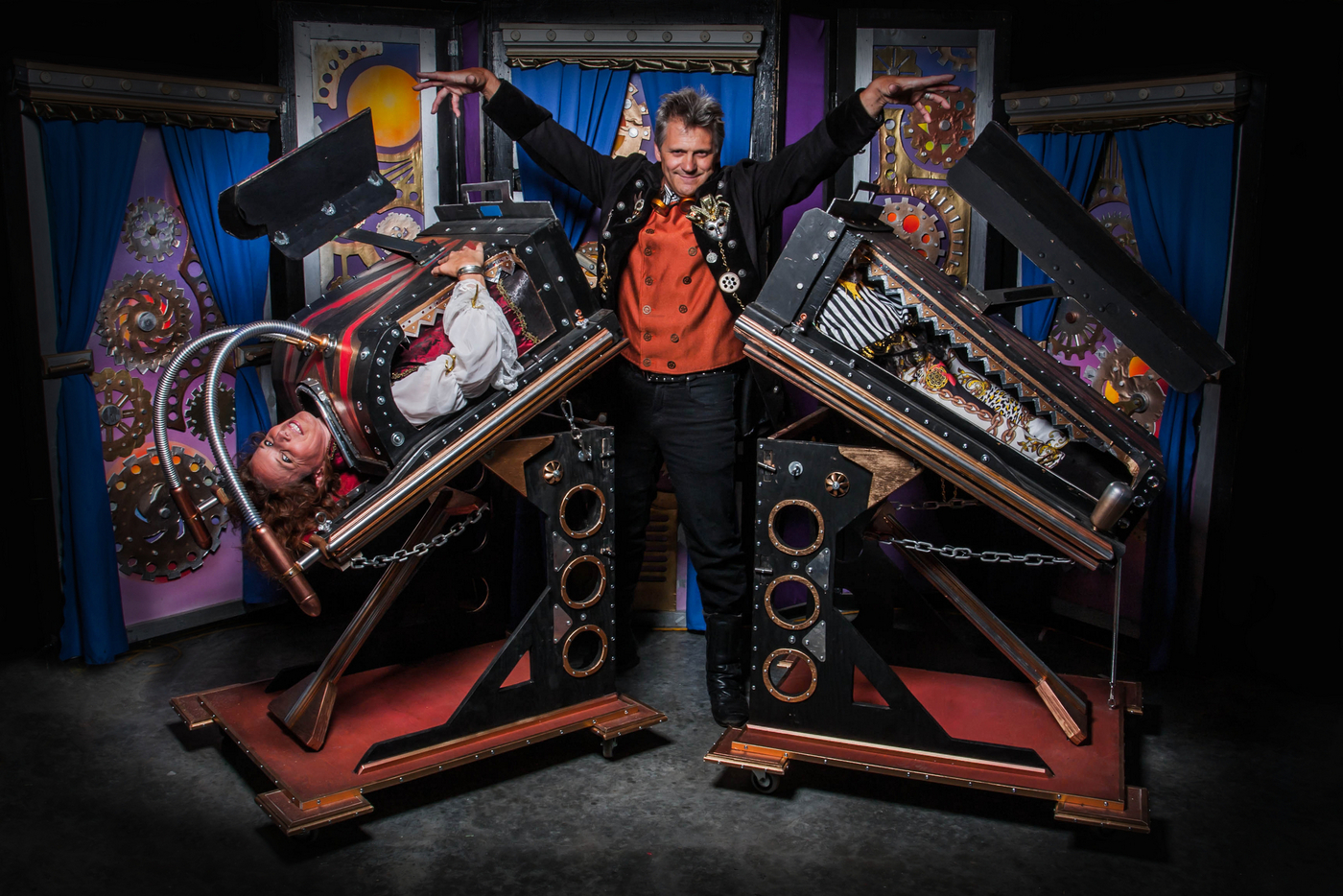 Lawrence Larouche and Cynthia Martin perform hundreds of their their elaborate ‘Steampunk’ Magic shows across the country each year.

Master Magician and mentalist Lawrence Larouche has been performing for more than 30 years, but his latest trick — how to deal with a pandemic — might be one of his best yet.

Larouche and partner Cynthia Martin form the magic team Majinx and normally perform hundreds of shows per year, travelling throughout Ontario, Quebec and the Maritimes to perform their trademark ‘Steampunk’ magic. But with COVID-19 having shut down large gatherings, Majinx has turned to live presentations online, developing a new interactive show ‘Virtually Impossible’, and continuing to blow minds all across the country with Larouche’s magic and mind-reading capabilities.

“(At first) I thought I could take some time off and maybe finish a story I’ve been writing, but then I realized this is going to go on longer than anticipated,” says the magician and showman, who decided to work on a concept which would allow him to perform online from the couple’s home in St-Eugene. “I figured I’d better stop writing stories and start getting back to figuring out how we’re going to make a living.”

Majinx is a full-time occupation for Larouche and Martin, requiring significant investments in equipment, costumes and props for their visually-stunning performances. Recently they developed a new show ‘Miraculum’, featuring Larouche’s sleight-of-mind and mentalist abilities, and it is this format which has been carried over to the ‘Virtually Impossible’ online shows.

“We do a lot of fairs, festivals and theatres across Canada and most revolve around family entertainment, but for the past two years we’ve been promoting our mentalist show,” notes Larouche, who has performed his ‘Steampunk’ themed magic and mentalist shows at such notable events as the Canadian National Exhibition, Casa Loma, Toronto Zoo and the Capital Magic Festival in Ottawa.

According to Wikipedia, Steampunk is a retro-futuristic sub-genre of science fiction or fantasy, which incorporates technology and aesthetic designs inspired by 19th-century industrial steam-powered machinery. Steampunk works are often set in an alternative history of the British Victorian era or the American ‘Wild West”, or in a fantasy world that similarly employs steam power.

“Steampunk is a very art-oriented and very rich movement that started many years ago – this whole genre of Victorian science fiction,” Larouche enthuses about the fantasy aspect of his shows, pointing out the many colorful and realistic props behind him in his home studio. “There’s a lot of detail involved when you look around – this is an elevator that I show up in at the beginning of the virtual show – and as you look up at the ceiling there are all kinds of wild items up there. It’s a very time-intensive thing, but audiences love it when the curtains open and just that energy is worth it.”

For now the curtain is opening up online twice each Friday evening, with shows scheduled at both 5 pm and 8 pm. Larouche is also performing private online shows and he has been thrilled with the response and interaction from those viewing the performances, which invites participants into the ‘Factory Fantastic’ – a secret facility where magical props are constructed for magicians around the world.

“We are talking to each other directly (through the screen). I’m reading your mind; I’m feeling you directly, so it is really kinda cool in that respect.”

“One thing about virtual is it’s worldwide and it’s really cool that you can have people from all over the world watching your virtual show,” adds Larouche, who is also somewhat enjoying not having to lug thousands of kilos of equipment all over the country and being able to set up his shows and new tricks in advance. “It’s great that we don’t have to go anywhere, so I guess in that respect it’s good – although we don’t make as much money. But it is fun to just walk through the house into the studio, get the costume on, flip the switch and go!”

Anyone who would like to learn more about Majinx and the ‘Virtually Impossible’ performances can visit their website Majinx, or their Facebook page. Tickets can also be purchased through Eventbrite.

Master magician and mentalist has been taking his ‘Virtually Impossible’ show online to home audiences. The interactive performances allow anyone viewing to take part and have their minds blown by Larouche’s extraordinary mind-reading abilities.