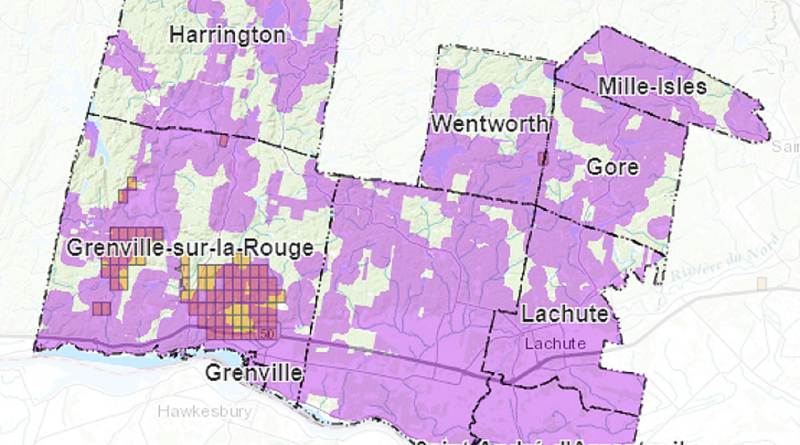 An MRC d'Argenteuil TIAM map. The small rectangles indicate boundaries of mining claims. The light purple areas are territories that are proposed to be incompatible with mining. The orange shading indicates areas within mining claims that do not presently have any designation of incompatible uses. The darker purple shading indicates territory where mining activities could take place but are within territories that are considered incompatible. Source: MRC d'Argenteuil.

There are more questions than answers when it comes to a plan to decide where to recommend against mining in the MRC d’Argenteuil territory.

Under Québec’s Mining Act, regional governments are permitted to recommend to the provincial government that certain lands within their territory are incompatible for mining uses.  The proper name for the government designation is Territories Incompatible with Mining Activities, known by its French abbreviation, TIAM.

On December 6 and 7, 2019, the MRC d’Argenteuil held consultations with local organizations landowners to find out if they want mining activities to take place on their property.  The organizations included those representing environmental conservation, recreation and tourism, and agriculture.  A second session on December 7 was held to consult with individual citizens.  On December 6, 22 people participated, and 50 people participated in the December 7 session.

“We woke the government up,” he said.

The reports from the consultation sessions indicated that many participants want better clarification from the provincial government about how lands may be considered for exemption from mining.   The participants wanted more clarification on the definition of mining activity, the impact of mining activities on existing residential properties, conservation, development, and culture.

The main theme to emerge from the consultations was that participants want a strategy to conserve the natural environment to be given top priority.

The consultations identified that protecting the physical and social health of residents and preserving local heritage sites were important reasons for designating where mining activities should not be permitted in Argenteuil.

The consultation process also resulted in a list of 23 recommendations for certain lands and bodies of water to be added as places unsuitable for mining activity.  Those include the Rivière Rouge valley, McGillivray, Craig, and Loughran lakes, ATV trails, and Camp Amy Molson.

Grenville-sur-la-Rouge Mayor Tom Arnold said that clarification is needed on the provincial guidelines for the TIAM process and that the municipality’s guiding principle is protecting the environment and the interests of various affected parties.

“We have to be logical,” said Pearce.

He said that MRC staff are faced with the task of recommending that resource extraction activities take place in “the least bad places.”

Full information on the TIAM process in Argenteuil, including the reports from the consultation process, is available at https://www.argenteuil.qc.ca/accueil/affichage.asp?langue=1&B=191