The COVID-19 outbreak at Maxville Manor remained in effect on Tuesday, August 11.  During his media briefing on Monday, August 10, Eastern Ontario Health Unit (EOHU) Medical Officer of Health Dr. Paul Roumeliotis said that one case remained active at the facility, but that an additional case that had been detected over the previous weekend involving a man in his 90’s turned out to be a false positive test.

The EOHU reported 179 cumulative cases of COVID-19 within its territory as of Tuesday, August 11.  Out of that number, 163 cases were considered resolved by the EOHU.

One COVID-19 patients from the EOHU’s territory remained in hospital as of August 11 and no patients were in intensive care.

The number of deaths due to COVID-19 within the EOHU’s jurisdiction has remained unchanged at 11 for 10 weeks.

Roumeliotis said that even though local case numbers are very low, it does not mean COVID-19 is not present in area communities and that precautions are still necessary.

On August 10, Roumeliotis said that the EOHU is working with all of the school boards across its territory to ensure that proper health and safety protocols are in place for when school resumes in September.  The EOHU is examining the plans of each board and school.

“We’re working with them to make sure they have the support that’s required,” said Roumeliotis.

Don’t throw your mask away just yet

For approximately one month, masks have been mandatory at all indoor public places across the EOHU’s territory and most of Ontario.  Roumeliotis said that the situation is not yet at the point where the mandatory mask order can be re-evaluated.  He also recommended that people wear masks in outdoor places where they are unable to keep an acceptable physical distance from other individuals.  Roumeliotis said there is no plan to require mandatory masks in outdoor public places within the EOHU’s jurisdiction.

Across Ontario as of August 11, 60 COVID-19 patients were in hospital.  Out of those 60 patients, 21 were in intensive care, and 12 patients were on ventilators.

Confirmed, active, and resolved COVID-19 cases across the Eastern Ontario Health Unit territory as of August 11, 2020. 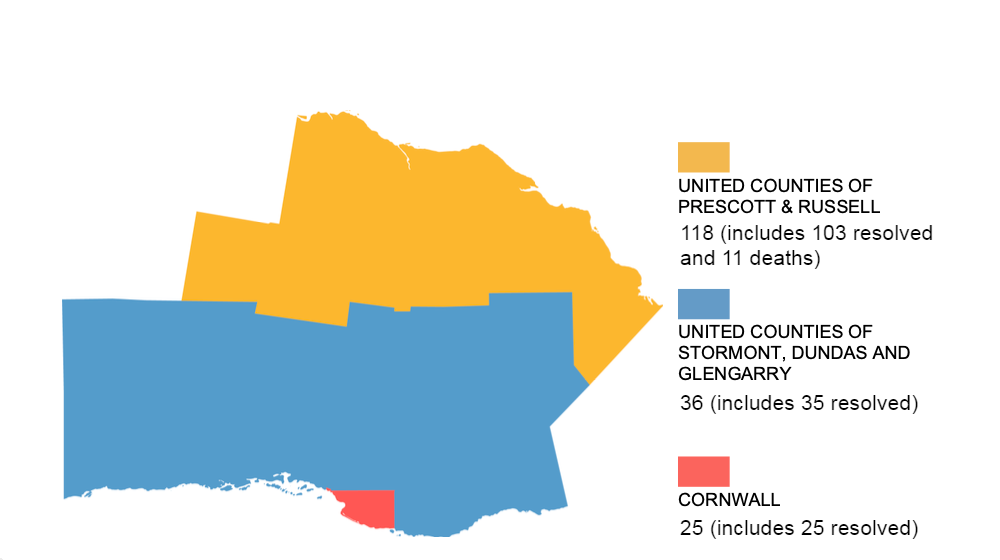