On Thursday, June 4, for the third day in a row, the number of confirmed cases of COVID-19 within the jurisdiction of the Eastern Ontario Health Unit (EOHU) remained at 149.

A new COVID-19 outbreak at a long-term care facility within the EOHU territory was declared on June 1 at the St-Viateur Nursing Home in Limoges.  EOHU Medical Officer of Health Dr. Paul Roumeliotis said that an asymptomatic employee who lives in Ottawa but works at St-Viateur had tested negative for COVID-19 on May 4, but recently received a positive result from a more recent test.  As a precaution, all St-Viateur residents and staff were tested for COVID-19 on Tuesday, June 2.  One case of COVID-19 in an employee or resident of a long-term care facility qualifies as an outbreak.

The other institutional COVID-19 outbreaks under EOHU jurisdiction, including the one at Pinecrest Nursing Home in Plantagenet that claimed the lives of 11 residents, are now resolved.

COVID-19 testing is now open to all residents of the EOHU territory whether they have symptoms of the disease or not.  There are five testing and assessment centres throughout the EOHU`s jurisdiction.  They are located in Hawkesbury, Casselman, Rockland, Cornwall, and Winchester.  As of June 4, 9,500 people had been tested for COVID-19 at the five centres, and by paramedics making home visits.  The total includes long-term care patients, but does not include patients tested at hospital emergency rooms.

The EOHU is testing retirement home residents and staff based on the assessed risk of each facility.  Retirement residences are listed as green, yellow, or red according to the severity of risk.  There are no red level retirement homes within the EOHU`s jurisdiction.

On Wednesday, June 3, Roumeliotis said that the EOHU had consulted with its lawyers and received an opinion stating that under existing provincial orders, beaches may open.  All beaches within the EOHU’s jurisdiction are currently closed but Roumeliotis has contacted all municipalities and park authorities stating that they may prepare to open.  Physical distancing will still be required at open beaches.

As of Thursday, June 4, Champlain Township had already opened the municipal beach in L’Orignal.

The EOHU will also be resuming its seasonal program of testing water at local beaches to ensure it is safe for swimming.

There were 776 COVID-19 patients in hospital across Ontario on June 4.  Out of that number, 121 patients were in intensive care and 94 patients were on ventilators.

For full COVID-19 information for residents within the Eastern Ontario Health Unit territory, go to https://eohu.ca/en/covid/covid-19-status-update-for-eohu-region . 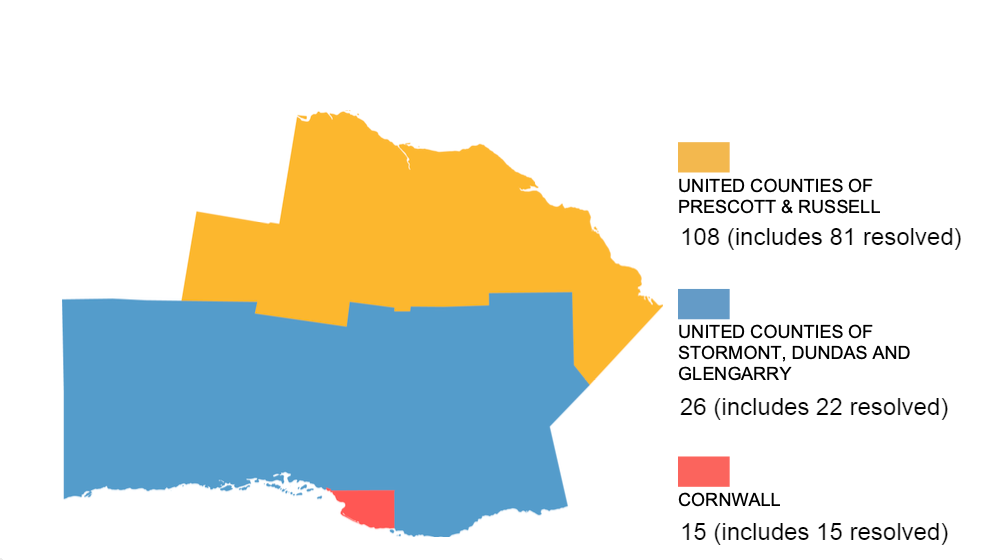