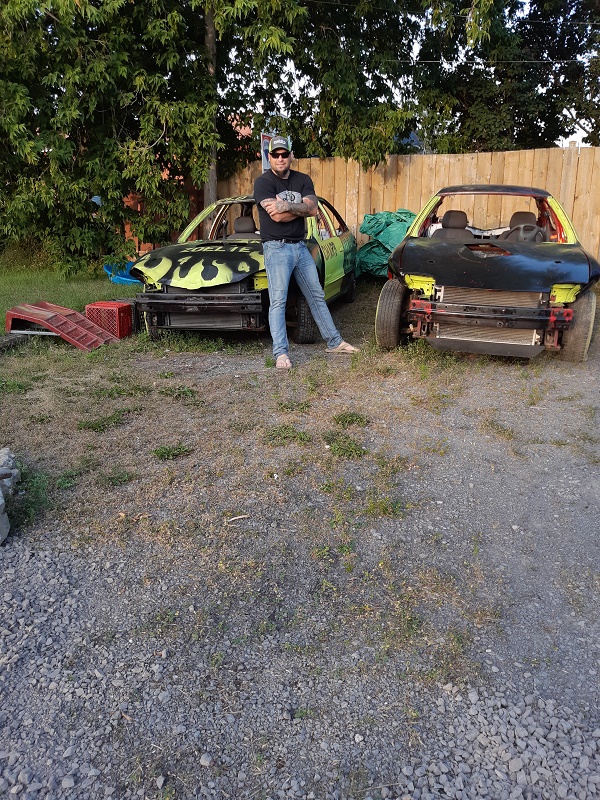 Eric Charbonneau and the two Pontiac Sunfire’s he is entering in the Vankleek Hill Fair demolition derby. Submitted Photo

The Vankleek Hill Fair demolition derby is so close, you can almost smell the exhaust fumes and hear the sound of crunching metal.  The drivers are pretty eager to make some noise too!

Charbonneau has won a few times in Vankleek Hill over the years and enjoys the excitement of the event.

“I like the rush, the feeling when you hit a car, I’m a risk taker, so the derby’s my thing,” he said.

Fleet lives in Nepean now, but was born and raised in Dalkeith and Vankleek Hill.  He’s returning to his hometown to compete in this year’s derby with a 2006 Chevrolet Cobalt.

“What I enjoy most about the derby is getting the car ready for the event. It’s not like working on your own car where you have to be cautious on how you do things,” said Fleet.

He’s been attending the Vankleek Hill Fair since he was six years old and wants to be part of what he called the “main attraction.” 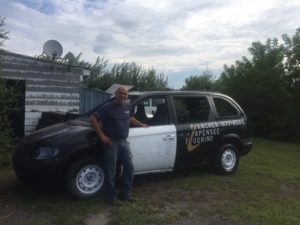 André Lapensée has wrecked a lot of cars in his time.  The Vankleek Hill flooring contractor has been entering derbies for 38 years.  His first entry was a Lincoln Continental when he was 16.  This year, he’s competing in a 2007 Dodge Caravan he’s been busy prepping.

Lapensée’s enthusiasm for demolition derbies has been featured on Choc des bolides, a TV program on French-language Canal D that documents the lives of derby drivers.

“It’s just for the thrill of it,” is Lapensée’s reason for his love of demolition derbies. 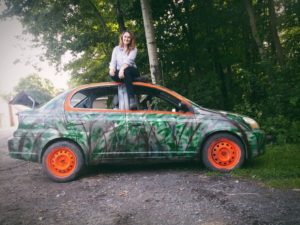 A paint job too good to destroy? Dara Macdonald and her tree-camo Toyota Echo. Photo submitted.

First-time derby driver Dara Macdonald has been part of the pit crew for her friends who entered past demolition derbies, but this year, she wanted to try getting behind the wheel herself.

Her car is a 2003 Toyota Echo which she says has never let her down.

Macdonald’s favourite part of the derby process is preparing the car for the big day, especially the painting.  Her background is in fine arts so the paint job on the car is a highly detailed tree-camo motif.

“I would say look out for the tree-camo painted car, but it might just blend right in!” Macdonald joked. 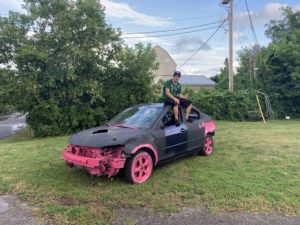 A 2005 Mazda 3 will be Gabriel Myre of Lachute’s first ever entry into the Vankleek Hill demolition derby.

Myre has wanted to enter for three years, and now he is doing it.

He found the car for sale on Facebook for $180 and his friend Johnny Paquette from Vankleek Hill has been helping get it ready for the derby.

“For the fun of it,” is Myre’s reason for entering.