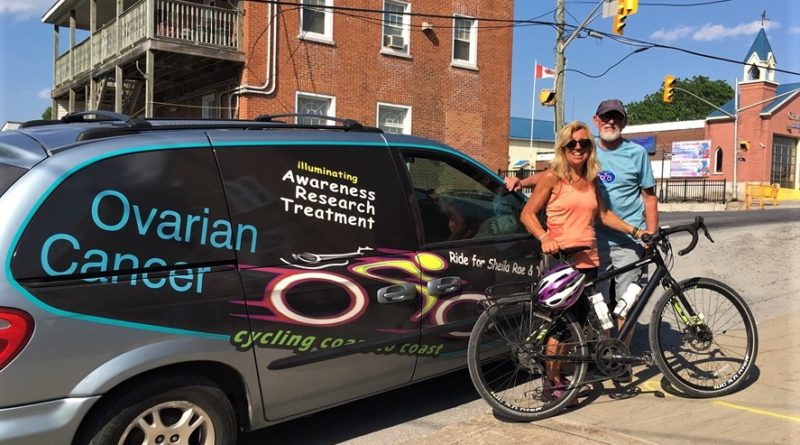 Courage, determination and perseverance are the fuel that propel J. Kathleen Thompson to continue her 6,000-kilometre cross-Canada cycling trek.

On Tuesday, July 2, the 63-year-old resident from Christina Lake, B.C., spent the night at L’Orignal’s campground after cycling from Ottawa to Hawkesbury.  The idea for the ambitious ride came to Rae after losing her sister Sheila Rae Trautman to ovarian cancer in November 2018.  With only a couple of months to plan, Thompson and her partner Ken began their journey eastbound from Vancouver to Halifax.

“The primary motivator came as a result of seeing the impact my sister’s death had on our family.  Each year, 2,800 women are diagnosed with ovarian cancer in Canada and 1,800 of them die as a result”, said Thompson.  “It has such an incredible ripple effect, you wouldn’t believe how many people we met on our trip that know a mother, daughter, or sister who has died from ovarian cancer.”

“In the last 50 years, there has been very little improvement in research and treatment for ovarian cancer.  It is an aggressive and difficult cancer to detect and unfortunately, due to late detection only half of the women with ovarian cancer survive,” said Thompson.

“It is important that people advocate for their own health, do the research and get educated.”

While averaging about 120 km per day, yesterday marked day 50 out of the 64-day trip.  When asked how she was feeling at this stage of the ride, the former teacher chuckled as she referenced her many adventures since retiring eight years ago.  “I’ve cycled through the treacherous terrain and brutal conditions of the Pamir Highway in Central Asia, where food and facilities were sparse.  That made for an intensely difficult journey,” said Thompson.

You can follow Thompson’s journey on her Facebook page at: Ovarian Cancer Ride for Sheila Rae or on her blogsite at justgojo.com.