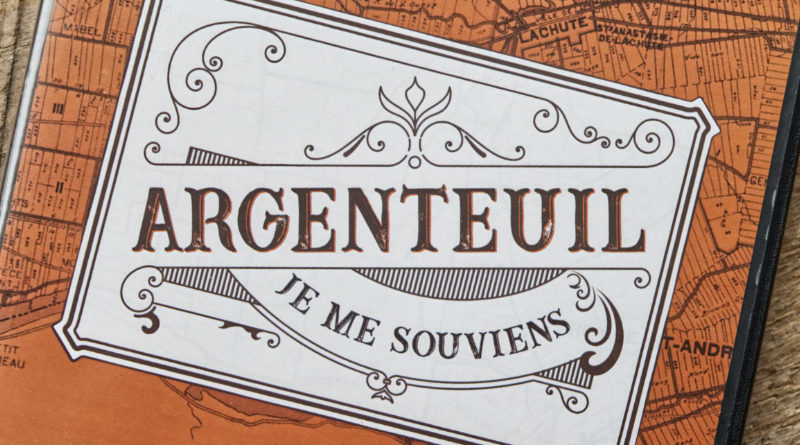 Launched at the beginning of April 2018, Argenteuil, je me souviens is a 40-minute documentary on Argenteuil, its beauty, its history and the enduring appreciation people harbour for the territory. A DVD version is available at the MRC's offices in Lachute's gare historique on Berry street.

If you are from Argenteuil, mark August 2 to 4 on your calendar.

The Our Communities, Our Heritage reunion is taking place that weekend and is for all past and present residents of the historic county, now the MRC d’Argenteuil.

Things get started on the Friday night with a meet and greet from 5 p.m. to 10 p.m. at the Royal Canadian Legion hall in Brownsburg with live entertainment.

The rest of the festivities take place at the Lachute Flea Market, located on Rue Principale (Route 148) at the west end of town.  On the Saturday, things begin with registrations at 10 a.m.  Historical displays on the past and present of local communities will be featured.  Saturday also includes musical entertainment, a community supper, and dancing that night.

On Sunday at the flea market grounds, a breakfast will be held along with live entertainment.

The entry fee for the entire weekend is $20. Admission is free for youths under the age of 16.

Reunion committee treasurer Susan Kuhnel-Barlow said the 52 historical displays will include a video that has been produced on the history of Argenteuil, along with information about past and present industries such as Ayers in Lachute and Orica (formerly CIL and ICI) in Brownsburg.  There will also be displays on railway history and individual municipalities.

For the younger attendees, a magician will be on hand and there will also be a petting zoo.

The reunion is also highlighting the 85th anniversary of the Lachute Lion’s Club.

Kuhnel-Barlow said people from as far away as Africa, the United States, and British Columbia are already planning to attend.

The organizing committee has decided to donate any of the profits from the reunion weekend to the Centre au sources and the Maison de la famille.

Kuhnel-Barlow said the committee researched how much funding those organizations already receive in order to determine their need.  The organizers also wanted to ensure proceeds went to organizations that assist a diversity of people in the community.