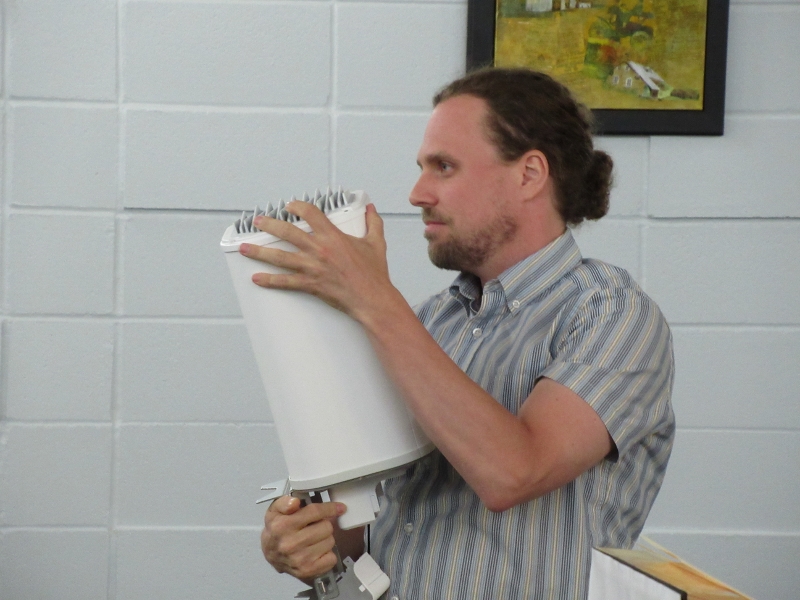 Jamie Bogue of IGS with one of the 5G node units. Photo: James Morgan

The beginnings of what could be a 5G internet network are coming to Hawkesbury.

On June 24, town council approved a recommendation to establish a pilot project with local internet service provider IGS that will see three “nodes” developed to test 5G’s feasibility in town.

The initiative will not cost the town anything.

Bogue called 5G a “disruptive” technology because it offers internet for less than other prices on the market.

He said there is strong local demand for “high speed for a good price.”

For now, the three test sites include the IGS offices on Main Street, the Hawkesbury town hall and Old Mill Park.

Bogue said the 5G system would make Hawkesbury what he called “Smart City” ready and that the municipal government could use it to better manage the delivery of services.

The network in Hawkesbury could increase to 20 nodes, depending on the outcome of the pilot project stage.

Wi-Fi from a 5G node is available within a 300-metre radius.  That will make outdoor Wi-Fi possible around the first three places they are being installed.

IGS has offered to pay half of the approximate $5,000 cost of replacing the existing communication tower at the town hall if the existing one is unsuitable for its needs.

“The idea of competition is always very healthy because it reduces the price,” said Councillor Robert Lefebvre, in reference to other providers and competitors.

Bogue said his 5G plan would cost about a half a million dollars, less than what Bell Canada is doing with its other fiber-optic projects in the area.

When the time arrived for council to discuss accepting the IGS proposal, Councillor Lawrence Bogue declared a conflict of interest and left the council chambers; he is not an owner of IGS, but does own shares in the company, which is separate from Bogue Photo.

Councillor Yves Paquette expressed concern that the agreement could be a violation of a provision in the Municipal Act that prohibits “bonusing” where a municipality receives a discount in return for a service agreement.  He referred specifically to the proposal to split the cost of a new tower.

“Since I want your project to go ahead, I want to make sure we’re not allowing any bonusing,” he told Jamie Bogue.

Chief Administrative Officer Daniel Gatien said that to avoid bonusing, IGS would be paying for the full cost of the tower.

Mayor Paula Assaly referred to Paquette’s bonusing concerns and noted that Gatien examined it from a servicing aspect and as a pilot project.  She said further negotiations about costs take place if it moves to the second phase.  The mayor emphasized it is only a pilot project.

Council unanimously approved the proposal with a directive to Gatien to research the legislation prohibiting bonusing to ensure it does not occur.