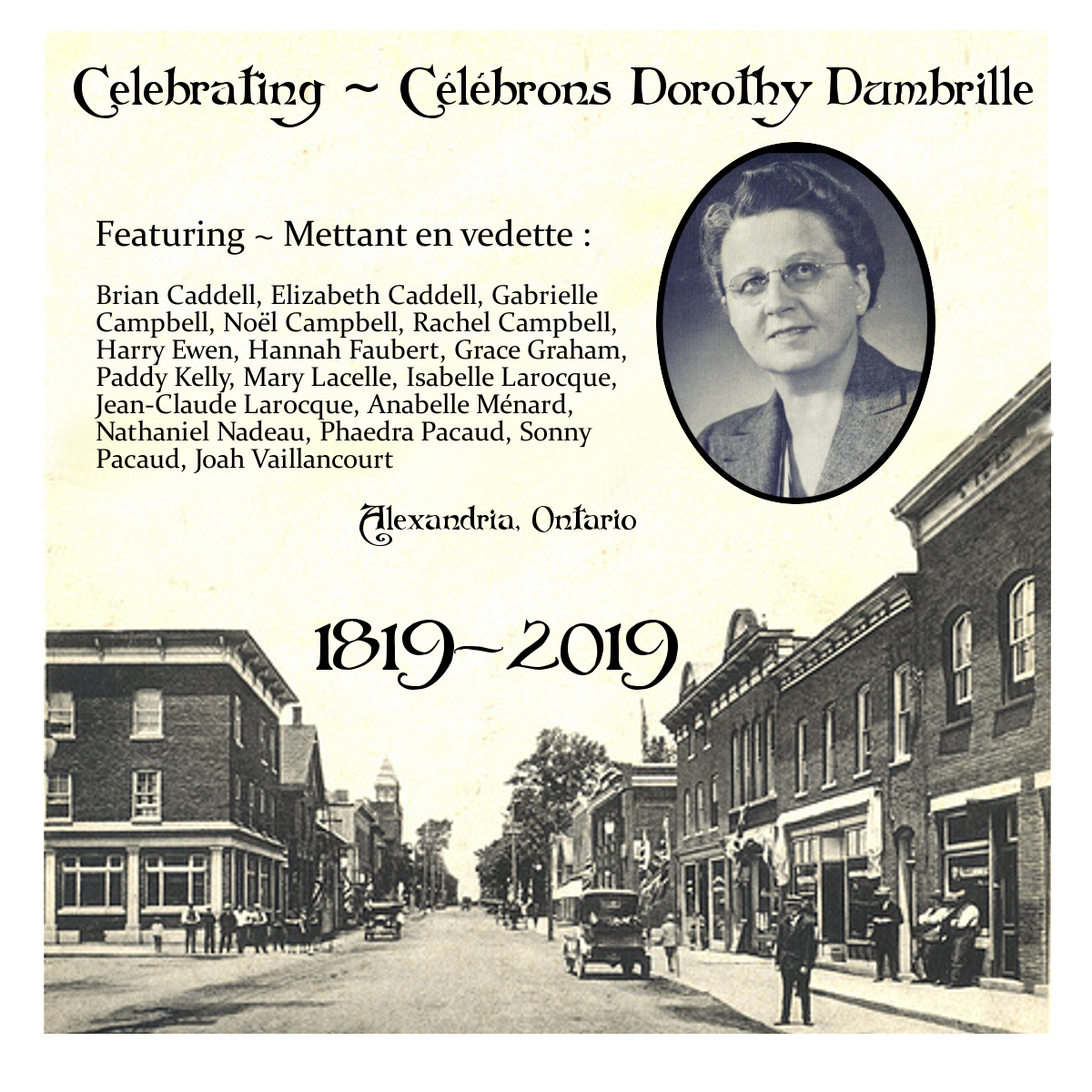 The late poet Dorothy Dumbrille is being celebrated by musicians who have set her poems to original music and are releasing an audio CD  on June 28, 2019 in Alexandria.

At the CD launch there will be historical interpretive displays, guest speaker archivist Allan J. MacDonald, and live music.

A community project was initiated early in 2018 to produce an audio CD based on the works of the late Dorothy Dumbrille, a local writer who lived in Alexandria for 56 years. Several musicians of all ages in the Glengarry region of Ontario were approached to set her poems to original music as a means to celebrate her life and accomplishments. The CD launch will provide attendees with focused historical perspectives on the life of Dorothy Dumbrille as well as entertain the audience with live performances of the music from the CD. The CD was recorded, mixed and mastered in Glengarry, Ontario. The moment seemed ideal to celebrate one of Alexandria’s important personalities as this year marks is the 200th anniversary of the town.

A compressed mix of all the songs from the cd can be found here:
https://drive.google.com/open?id=1i3VD_JJ9hbJC_sVcv-4nHEFnSMkTVniE

She started writing poetry during World War 1. Her first verses were short, humorous pieces related to conditions in the Department of Militia and Defence. These works were very popular with colleagues but did not amuse the Minister, who he advised her to practice her talents on some other subject.

Dumbrille was active throughout the 1920’s and 1930’s as a singer and actress in various live performances.

With the outbreak of WWII, Dunkirk, and Britain’s perilous position, Winston Churchill’s speech stirred her to write first poem in more than 25 years (We Come! We Come!).

By the early 1940’s, she was recognized as a Canadian novelist and poet. In 1981, Dorothy Dumbrille was credited with producing more than 25 works including novels, plays, radio dramas, newspaper serials and books of poetry. Her poetry was popular during WWII, especially as a voice for women’s loyalty to the war cause and women’s endurance on the home front. She published patriotic poetry in The Montreal Star, prompting hundreds of letters from families of servicemen during WWII. Letters of appreciation were received from Mackenzie King, Lady Byng of Vimy, Sir Charles G.D. Roberts (one of Canada’s finest sonnet writers) and Eleanor Roosevelt. Dumbrille also wrote for the Toronto Globe and Mail (for about 20 years) and for The Ottawa Citizen as a book reviewer and critic.

As she became more known in daily life by the literary name of Dorothy Dumbrille, she became, in effect, the first woman in Alexandria to “keep her own name” rather than use the surname of her husband; although identified as Mrs. J.T. Smith in public documents.

– Dumbrille was a member of the Ontario-St. Lawrence Development Commission, 1956-1972, (now The St. Lawrence Parks Commission) a committee that planned and initiated The Upper Canada Village (opened 1958). She later received a scroll in recognition of her contributions to the Commission.

About the project organizer:

Gabrielle Campbell is a native to Glengarry. She is a music teacher, as well as an active musician in the region specializing in voice and piano. Gabrielle started the project because of her love of the books and poetry that Mrs. Dumbrille wrote, and the remarkable life that she led. Gabrielle can be reached via phone 613-525-0516 or by email: [email protected]