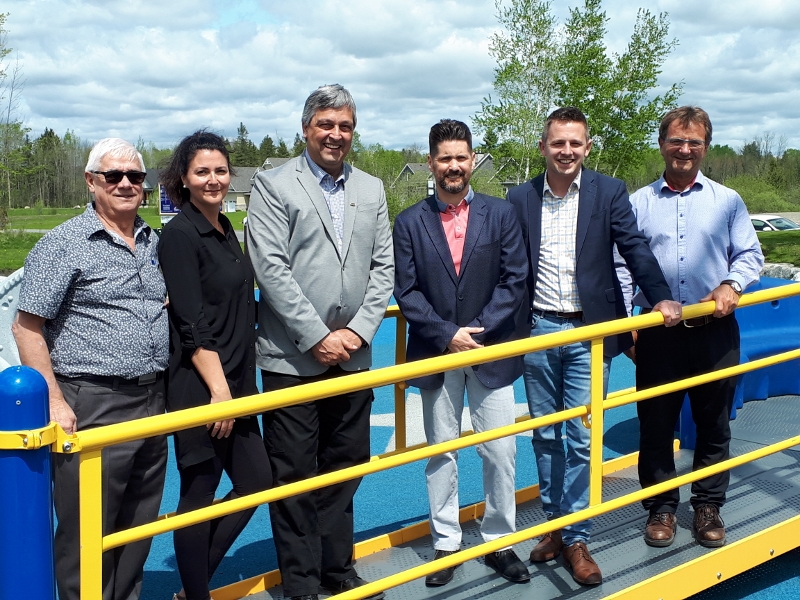 Sacha’s Park in L’Orignal is expanding this year, and federal funding will help pay for it.

On May 24, Glengarry-Prescott-Russell Member of Parliament Francis Drouin announced $87,000 in funding from the Enabling Accessibility program to construct the second phase of the universally accessible playground.  Champlain Township has already budgeted $52,000 for the project, which includes a splash pad.  The park already offers activities where users can make music, pretend they are on a boat rocking at sea, or walk around on a soft-rubberized surface.

“Every child deserves a place to play and parks like this make the community much better,” said Drouin.

Champlain Township Director of Parks and Recreation Lisa Burroughs said the layout work for the new splash pad was done on the morning of May 24.  Indeed, the area where it will be constructed was marked with spray paint and little flags directing workers where to dig.

The tender process for construction has already been completed and township is planning to have the splash pad finished by July so it can be enjoyed this summer. The contract was awarded to ABC Recreation.

“It really touches me to see the continued support the community has toward this project, said Jason Chénier, father of the late Sacha Chénier, for whom the park is named.

Sacha Chénier died in 2014 at age 11 and had numerous medical conditions throughout his life that limited his ability to enjoy parks and playgrounds.  The inspiration for Sacha’s Park came from a Make-a-Wish Foundation-sponsored trip to Florida that Sacha was granted where he got to enjoy a universally accessible playground.

A fundraising campaign followed, and Sacha’s family purchased a vacant residential lot next to their home in the Place La Seigneurie neighbourhood, which was transferred to the township for the park.