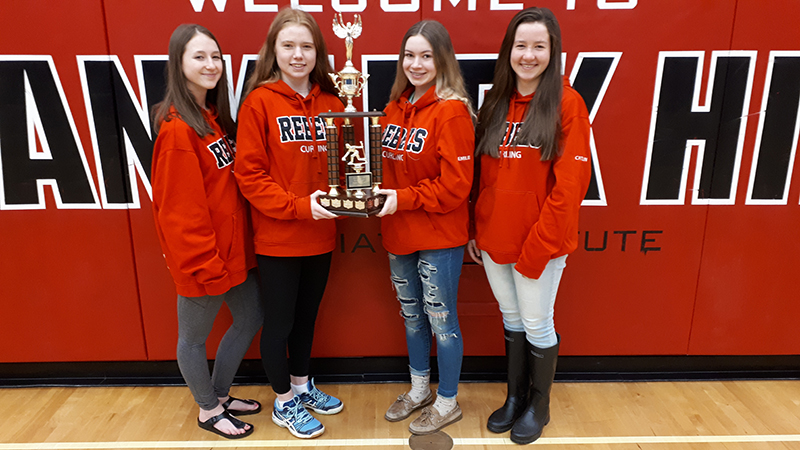 The Vankleek Hill Collegiate Institute (VCI) Rebels girls curling team has swept its way to the top—and has the opportunity to keep going.

In a re-match of the 2018 EOSSAA final, the VCI team played against the team from North Dundas District High School in Chesterville.  The difference was that this time, the VCI Rebels took the championship trophy home after winning the final game 5-3.

The VCI team now has the chance to be the best girl’s high school curlers in Ontario when they compete for the title at the Ontario Federation of Secondary Athletic Associations (OFSAA) Open Curling Championships from March 20 to 23 in North Bay.

The team has bonded well.  “We’re all kind of friends,” said Allen.

“It’s the best chemistry we’ve ever had on that team,” said Coach Dan Tremblay, who also teaches Physical Education at VCI.

It was Allen’s takeout shot in the eighth end of the game in Carleton Place that captured the EOSSAA title for VCI.  Tremblay said he called a time-out with Allen to discuss her options and she chose to make the takeout shot.

“She had the confidence.  She was decisive in making that shot,” he said.

Looking ahead to OFSAA in North Bay, the team is taking a cautious approach and diligently preparing.

“We’re all kind of just going in with an open mind,” said Allen.

Cooley is the only novice curling on the team and just started this season.

“It wasn’t too hard to get into, everyone helped me,” she said.

Tremblay credits the junior program at the Vankleek Hill club with forming several high-quality young curlers in the community.

Fortin said she enjoys curling as a good way to de-stress and meet people.

“You have to kind of strategize a bit more,” said Cooley about curling, compared to other sports.

“I train for my sport,” said Lovitt, who goes to the gym to prepare herself for the rink.

“I think that’s the best way to maximize your success,” she said.

Allen said she likes the element of respect there is on the ice among curlers.

Allen and Lovitt are both in grade 12.  Allen is not sure what her next move in curling will be when she continues her education in September at the Macdonald Campus of McGill University in St-Anne-de-Bellevue.

Lovitt said she has already contacted the varsity curling coach at Queen’s University in Kingston where she will be studying, and also plans to curl on another league in Kingston too.

Fortin will move into the skip’s role next year and Cooley will become the vice.  They are hoping to find other students who are interested in becoming the new lead and second.