The unique path of Lorel Crawford: from school principal to model 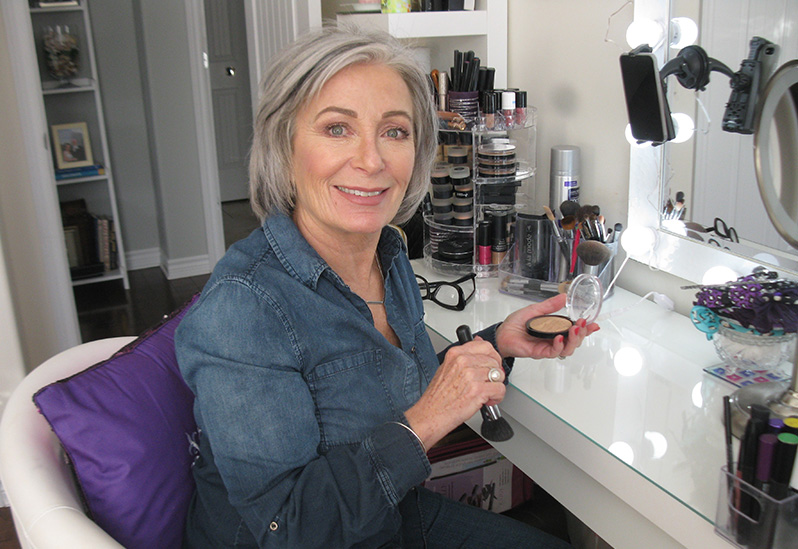 Most of us, when considering what we might do in retirement, would not choose to start a business or take up a modelling career. But then, most of us are not Lorel Crawford.

This March, at the age of 63, Crawford will make her debut as one of ten models for the semi-annual Younique catalogue, the lead publication of a worldwide direct sales skin care and cosmetics company for which she is an elite presenter.

“Founded in 2012, Younique is one of the fastest growing direct sales company in the world,” Crawford claims, “with 1.2 million presenters worldwide.” Only ten presenters are featured in each catalogue, issued in September and March of every year.

“It was great fun, involving a six-day all-expenses paid trip to Younique’s headquarters in Utah,” she notes. To be selected for the catalogue, one must be nominated and Crawford was recommended by her mentor Megan Kirby of Hudson, Québec. “We were treated like royalty, with a day of spa treatments, a sight-seeing day and three days for the photo shoot,” she says.

Choosing a career in makeup and skin care may seem like an odd choice for someone who was a teacher and a school administrator for 34 years before retiring in 2011.

“I’ve always been a doer and I’ve always loved makeup,” Crawford says. “But starting my own business never came across my radar until I retired and found myself with time on my hands.”

Her husband, a car salesman, often worked evenings and after Crawford was introduced to Younique by Megan, she joined the company as a presenter in 2015. She held her first sales party in her own home and since then, she has become one of the top three per cent of the company’s sales people, with 43 other presenters under her.

“I love the products and I love the company’s commitment to uplifting and empowering women around the world,” she says. Founded by a brother/sister team, the company, in addition to its line of products, finances a foundation to prevent childhood sexual abuse and a retreat to help victims heal.

The key to Crawford’s success lies in her embrace of social media and technology.

“Before I joined Younique, I had never even taken a selfie,” she confesses.

“I wasn’t on Facebook.” She now does live videos with herself as a model, and has more than 2,000 followers.

“The videos are my storefront,” she says. “They add value.” In them, she introduces viewers to makeovers, new techniques and Younique’s products and opportunities.

In the era of #Me Too, pay equity and other women’s rights movements, focusing on a woman’s appearance may seem like an antiquated choice. But Crawford is quick to point out that choosing to engage in direct sales is a way of providing women with a potentially lucrative part-time career that boosts their financial independence, self-confidence and business acumen.

“I’m a mother of three, grandmother to nine children,” Crawford notes. “This is a great way for stay-at-home Moms and retirees like myself to pursue a career they love while enjoying the all the other aspects of life.”