Repainting of Community Patchwork Mural panels to begin in January 2019 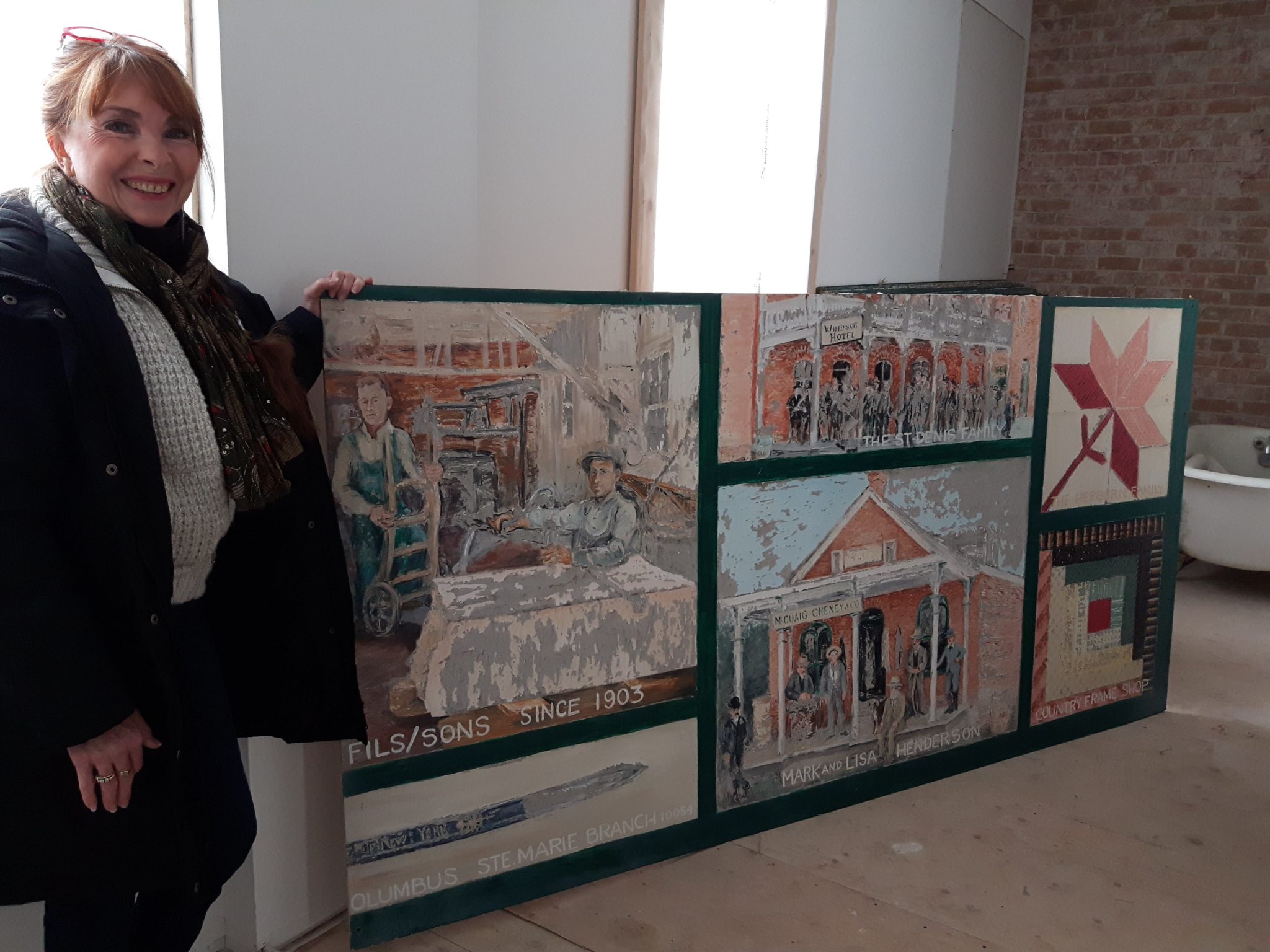 In the new year, the Community Patchwork Mural is about to get a major makeover. Several weeks ago, the four-foot by eight-foot panels were removed from the north wall of the building which currently houses Pink Bow Tie and Champlain Insurance.

These panels are currently stored on the second floor of the Creating Centre in Vankleek Hill, awaiting volunteers who will paint the same images on new panels of marine-grade plywood, according to project coordinator Lorie Turpin. Many of the images on the existing panels have faded to a state which is almost beyond recognition. But Turpin says she has artists lined up for January, and the space on the second floor of the Creating Centre, located at 11 High Street, has been rented for a few months to allow artists to complete the project. The south side of the second floor will be dedicated to the mural painters, Turpin said. She said that she isn’t necessarily looking for accomplished artists to help, but those who do have talent will be appreciated. There are simpler parts involved in the project, for example: creating the squares for the images, but there are parts where some talent will be required — there are lots of horses in the mural, and people, too.

“We know it might look a little different from the original, but we will be aiming to reproduce the images that were on the mural as closely as possible,” Turpin said.

The plywood panels were set to be delivered before Christmas and Turpin says the existing images will be copied or traced onto the new plywood panels. 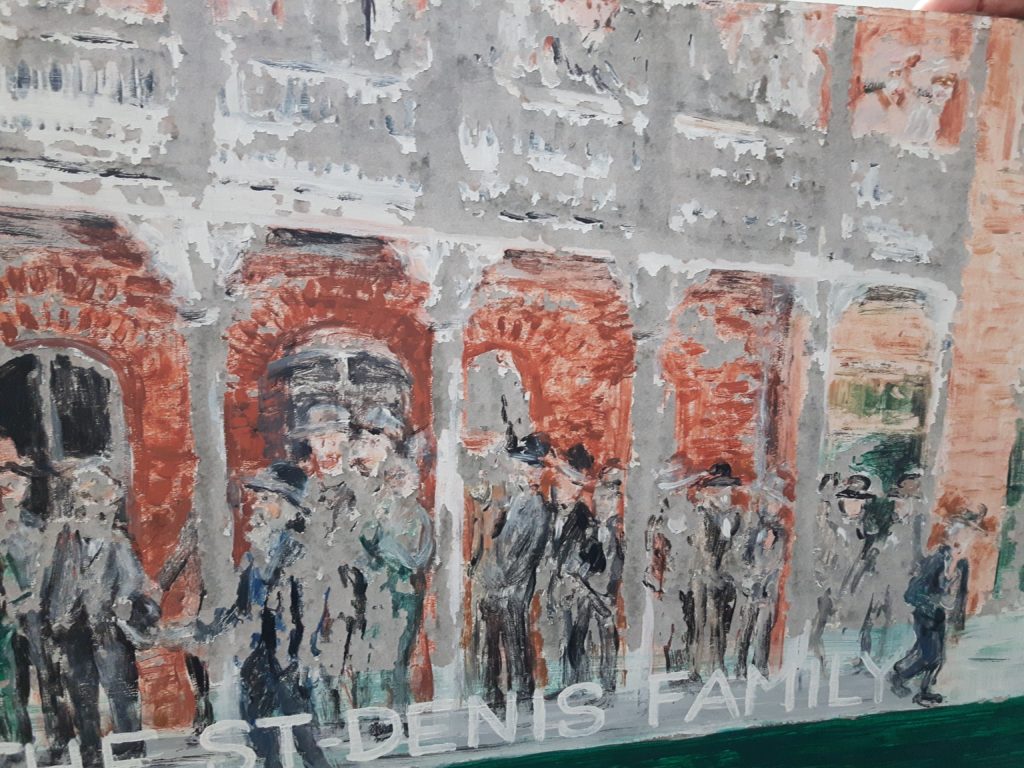 The grey parts seen in this mural are areas where the paint has worn off the plywood panels of the original mural called Community Patchwork.

Turpin said she hopes to have an event on Family Day where children might be invited to sign their names on the reverse side of a panel, for a small fee.

But the first order of business is to seal the plywood before proceeding to the painting of the images. Acrylic paints will be used and once the panels have been completed, they will have sealer applied again.

The goal is to complete all of the panels so as to reinstall them all at the same time; an encroachment permit is required from Champlain Township for the installation, she said, as scaffolding must be placed on sidewalks while the panels are being reattached to the building. She is hoping the project moves along fairly quickly; it took the original mural artists – Elisabeth Skelly and Odile Têtu — an entire summer to paint the panels the first time around.

In the meantime, Turpin, who is a local artist and offers art lessons, does not have experience painting murals and says she has been doing a lot of research, but she welcomes advice. And volunteers. She would like to track down the original images, many of which were chosen from the pages of The Review and a volunteer to help find those images would be appreciated, she says, in addition to volunteers to help paint the images.

If you want to offer your time or expertise, you can contact Turpin by calling 613-678-0009 or send an email to: [email protected]

About 17 years ago, the existing Community Patchwork mural was paid for originally by having sponsors, families and individuals purchase images; donors’ names were marked on the sponsored image. Those who originally sponsored sections of that mural will receive invitations and the first opportunity to sponsor their space for a second time around, ensuring that “Community Patchwork” will live on.

To date, Derek Evans, who is heading up the Mural Restoration project, has raised about $12,000. Last year, Champlain Township approved an $8,000 donation to the project; funds were provided from the Vankleek Hill Hydro reserve fund.

If you would like to make a donation, cheques can be made out to Arbor Gallery (Murals Project). All donors will receive a charitable donation receipt. Arbor Gallery has kindly taken this project under its wing, said Evans.

The two murals on the side of the Jade Garden building on Home Avenue and “Going to The Fair” on the north side of the Jan Holland building on High Street are considered to be unsalvagable at this point, but Evans, who has been researching the possibilities for many months, said he is open to suggestions or new information.  A new mural is planned for the south side of the Liquor Control Board of Ontario Building on Mill Street. Images for that mural have been selected and a design has been completed.

The restoration project includes the new mural for the LCBO and the two interpretive plaques for the Home Avenue and the Going to the Fair murals.
There is still money needed for the project, says Evans, who estimates the cost of the restoration of Community Patchwork Mural at $4,500. He is gearing up to invite original donors for their support and reminds everyone that donations made before the end of December will be eligible for a tax receipt for their 2018 taxes.
Donations can be sent to Derek Evans, Box 558, Vankleek Hill, Ontario. Cheques should be made out to Arbor Gallery.