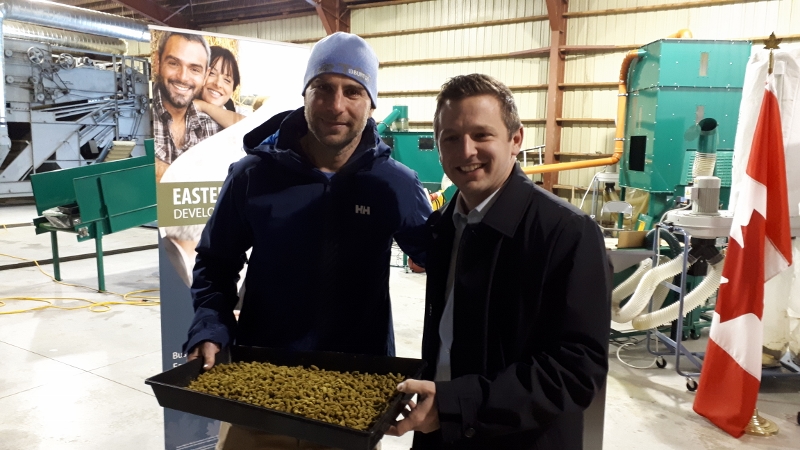 Things are really hopping at Dalagra Farms near Dalkeith.

The farm grows—and now can process hops thanks to a $20,000 grant from the federal Eastern Ontario Development Program and the Cornwall and Counties Community Futures Development Corporation.

Hops are a main ingredient in ale and beer. They are what give ale its distinct flavour.

Farm president Kurt MacSweyn said the grant money covered about 20 per cent of the cost of purchasing milling machines that grind the hops into pellets for use by breweries. The pellets are a greenish-yellow colour and look similar to rabbit food.

The pellet mill at Dalagra is the first in the region and will provide that farm—and other growers in the region with a processing facility nearby.  Previously, the closest processor in Ontario was in Tweed, north of Belleville.

The equipment was purchased from the Czech Republic and a representative of the manufacturer traveled to Dalagra Farms to set it up.

The farm also has a large hop harvesting machine. The vines are cut from the field and then fed through the machine which removes the hops from them.  Milling the hops into pellets is the next step in the process.

Dalagra is a cash-crop farm and MacSweyn said they planted their first crop of hops in 2017. The family has been farming in the Dalkeith area for four generations.

A commercial hops field looks a bit unusual. As hops grow on vines, farmers like MacSweyn install many poles and wires to support the vines and keep them under control.

MacSweyn is one of the partners in Wood Brothers Brewing Company, near Glen Robertson, which is still in the early stages of production. Hops from his farm will supply that brewery, but MacSweyn is also considering other small breweries throughout eastern Ontario, or finding alternative uses for hops such as essential oils and medicinal benefits.

North Glengarry Mayor Jamie MacDonald said the funding for Dalagra will bring greater business to the township and reduce the distance hops growers have to travel to get their crops pelletized.

Glengarry-Prescott-Russell Member of Parliament Francis Drouin congratulated MacSweyn and told him, “You’re choosing a type of agriculture that is growing,” in reference to the hops industry.

Dalagra Farms is located on Glenelg Road between Laggan and Dalkeith.