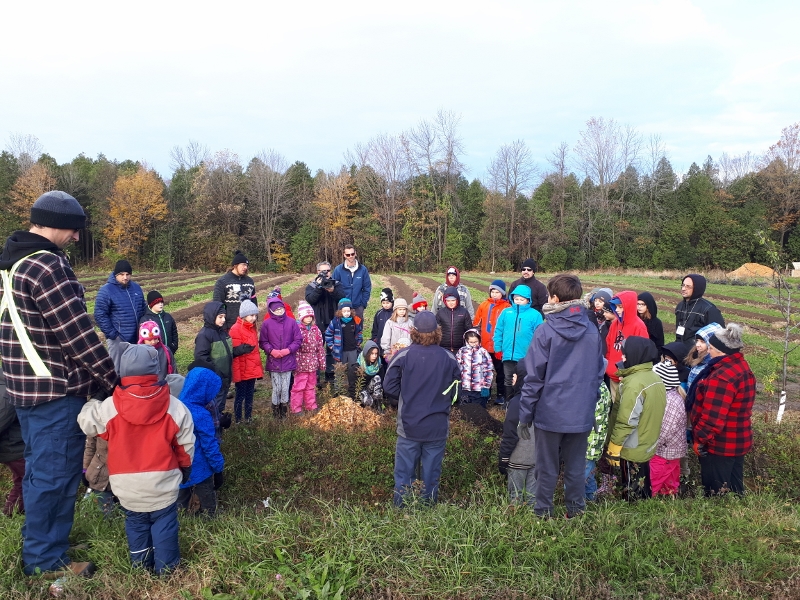 A tree planting project by elementary school students in Brownsburg-Chatham will bear fruit. And that’s the whole idea.

In late October, 40 students from grades four, five, and six at École Alternative d’Argenteuil planted apple, plum, pear and hazelnut trees on the site of the MRC d’Argenteuil community agriculture project in Brownsburg-Chatham.

The project was made possible by Tree Canada and its Edible Trees program. Fruit from the 85-tree plantation will improve and diversify the supply of fresh food at food banks in the Municipalité Régionale du Comté (MRC) d’Argenteuil.

MRC Prefect Scott Pearce appreciates the support of Tree Canada.”We are very proud to announce that within a few years, when these trees reach maturity, we will be able to add fruits and nuts to the twenty varieties of vegetables and herbs grown annually on the agricultural lands of the MRC. We thank Tree Canada for allowing the purchase of these trees and for supporting us in the fight against food insecurity,” said Pearce.

On planting day, the students were taught about the environmental benefits of planting trees, particularly about how they improve air quality. They learned how composting works too. The students were also told about the important role of pollinating insects like bees. The work of bees is highlighted on a mural at the site by painter Sophie Stella Boivin.

It’s the time of year for digging up root vegetables that are still in the ground. For their contribution to the planting, the École Alternative d’Argenteuil students got to take a bag of fresh potatoes and carrots with them when they left.

Along with the support from Tree Canada, the MRC d’Argenteuil received support from community partners for the planting project. Englobe Corporation supplied compost, Claude Baril’s sawmill provided materials for mulch. A group of people from Pavillon Hamford drug and alcohol treatment facility in Lachute prepared the planting holes.

Planting fruit and nut trees is part of the MRC’s sustainable development approach. The community agriculture project provides healthy and fresh food to nearly 2,000 citizens in the territory in need.

Tree Canada is a non-profit charitable organization working to improve the lives of Canadians by planting and maintaining trees.

Since 1992, the organization has planted more than 80 million trees in communities across Canada.