Hockey afternoon in Vankleek Hill: hockey in the past, present and future 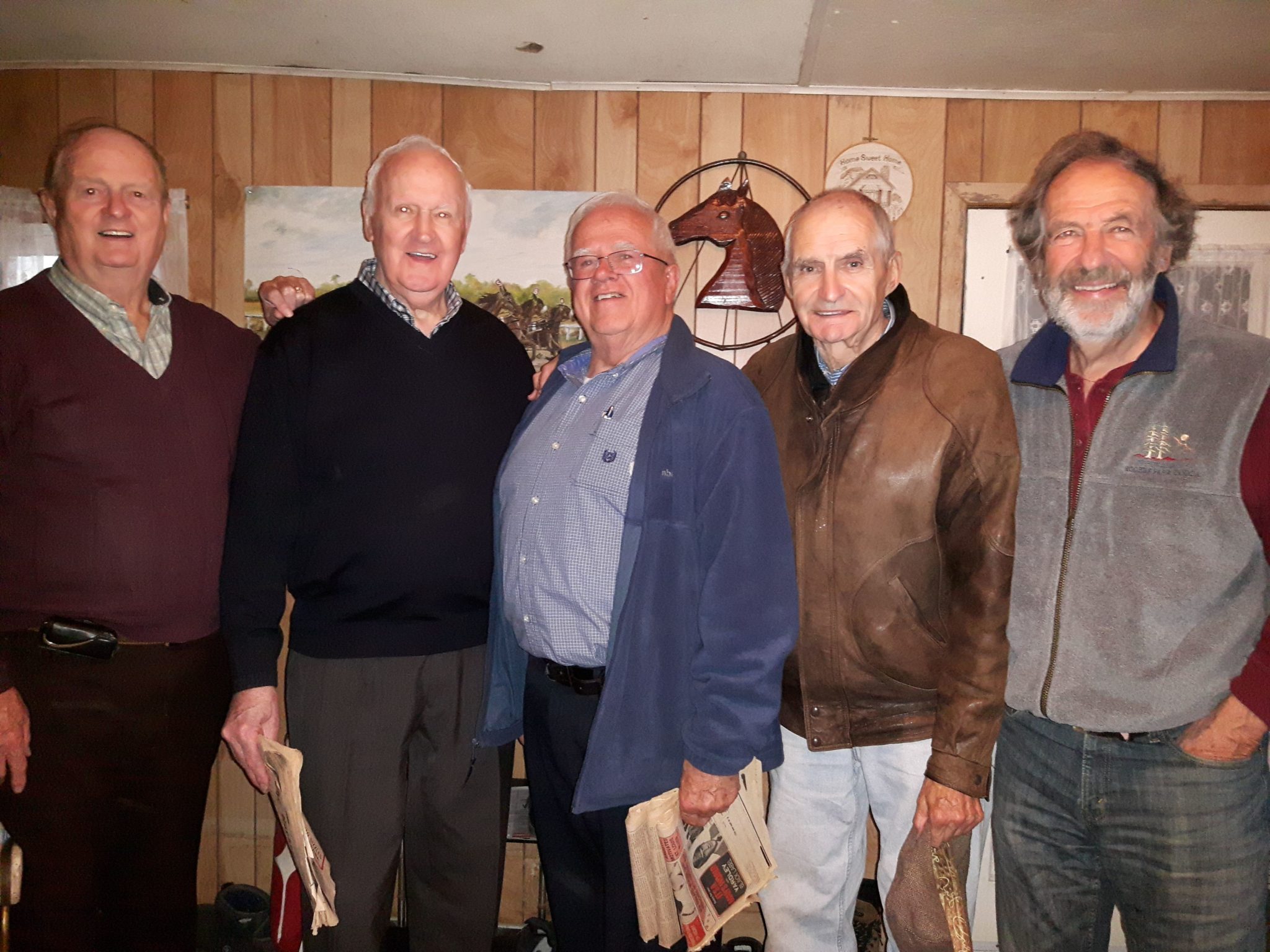 During his years on the racing circuit, Garnet Stephens met a lot of people and lasting friendships were often the result. In 2018, some hockey friends stopped in to visit Stephens at his home. From left to right are: Garnet Stephens, who welcomed Murray Costello, Champlain Township Mayor Gary Barton, Ron Zaine and Roger Casagrande to his home in 2018.

On a gloomy October afternoon, the stories and memories flowed under the cozy glow of the light hanging above Garnet Stephens’ kitchen table in his Vankleek Hill home.

Long-time friends Murray Costello, Rod Zaine and Roger Casagrande had stopped in to see Garnet — their friend and of course, a hockey fan to boot.

Now retired and living in Ottawa, Zaine has played in eight leagues over the course of his career, including stints with the Pittsburgh Penguins and the Buffalo Sabres.

Roger Casagrande has played hockey in Detroit, Chicago and Boston. And recently, after two hip replacements, he was back on the ice, playing hockey in Ottawa.

Despite his hockey credentials (he is a member of the Hockey Hall of Fame), Costello is easy-going and listening attentively as the men, including a drop-in visitor — Champlain Township Mayor and hockey enthusiast Gary Barton – talk about hockey greats and players who got their start in small towns. They seem to know everyone in the hockey world.

There is talk of Vankleek Hill’s own Mark Mahon, currently the Director of Sport at Kölner Haie in Germany’s top-tier Deutsche Eishockey Liga. Mahon has also coached the National Men’s Team in Japan for 11 years.

Barton spoke about the Montreal Canadiens hockey greats who came to Vankleek Hill to play against local hockey players at the Vankleek Hill arena –all thanks to Stephens, who had met some of the players at the harness racetracks in Montreal. (If you lived in Vankleek Hill during the past years, Stephens, seated in a sulky being pulled by one of his horses, was a familiar sight in the mornings. Stephens’ horses used to race at the track in Montreal.) Barton recalls John Ferguson, Bobby Rousseau, and Rocket Richard playing as part of that game, with none other than Maurice (Rocket) Richard being a referee.

Murray Costello was born February 24, 1934 in South Porcupine, Ontario. Although he entered the Hockey Hall of Fame in the Builders Category, Costello sports an impressive resume as a player, too. After three years of junior with St. Michael’s College in Toronto, Murray was signed by the Chicago Blackhawks, making his debut during the 1953-54 season. The 6’3″, 190-pound forward was traded to the Boston Bruins prior to the following season. Midway through the 1955-56 campaign, the Bruins sent Costello and Lorne Ferguson to Detroit in exchange for Real Chevrefils and Jerry Toppazzini. After being sent to Edmonton of the Western Hockey League to finish the 1956-57 season, Murray was reinstated as an amateur and completed his playing career with the Windsor Bulldogs of the OHA Senior loop. During 162 regular season NHL games, Costello collected 13 goals and 19 assists for 32 points. (Information from the Hockey Hall of Fame website)

At age 40, Costello returned to school and earned his law degree, which he said was the best thing he ever did, even though he and his wife had a family of six children at the time.

From there, Costello moved into hockey’s business and administrative side side. According to the Hockey Hall of Fame website, Costello, as an executive with the Seattle Totems of the Western Hockey League, guided the team to back-to-back championships in 1967 and 1968. He was publicity director of the WHL before acting as arbitrator for the World Hockey Association Players’ Association.

But Costello speaks with a quiet pride of his involvement with emerging hockey players.

Costello has a soft spot for players who come up through the hockey ranks after getting their start playing hockey in small town arenas.

So many players who get their start in small towns are really honest competitors and they work hard, says Costello.

In mining towns or other communities where there are few opportunities, Costello said young players likely thought that playing professional hockey was the only way out.

He speaks of Dick Duff, Davy Keon, Frank Mahovlich and Carl Brewer (the latter cut the palm out of his glove to get a better grip on his hockey stick).

Costello says that we need to introduce new Canadians to the sport of hockey. There has been a big shift to soccer and those players do not take so easily to hockey, he believes.

The hockey world is Costello’s family — it’s a big network, still, he says.

He is a big believer in minor hockey and says that parents need to back off sometimes.

“It’s the kids who suffer. Parents can push too hard and a kid doesn’t have fun any more,” Costello commented.

Not every child will go on to play on a National Hockey League team.

“But every now and then, there is someone who is just raw talent,” he says, referring to Wayne Gretzky.

The best think about minor hockey is to give young people the chance to get along with people. That is something they can maintain throughout their lives, Costello said.

The rising cost of playing hockey is a game-changer for many, he says.

Costello was also instrumental in the growth of women’s hockey. He oversaw the formation of the Canadian women’s team and the first international women’s championships, which took place in Ottawa.

“That was in 1990, he says, and the turnout at the game surprised a lot of people and more: the quality of the game also surprised people.

Mothers were coming with their girls and we all saw soon enough that women compete every bit as hard as male hockey players. Women trained harder than men, Costello recalled.

Mothers started to play to stay fit and soon, there were scholarships for the girls and a lot of them have done really well, Costello said. The female players, he said, wanted to do what the coaches wanted them to do.

Girls hockey is tougher to get going in a small town, Costello acknowledges and often, if there are not enough girls to make up complete teams, they end up playing on the boys teams. But that won’t grow women’s hockey, he says.

Costello said the rapid growth of women’s hockey has been amazing. After the win at the the 2010 Vancouver Olympics, Yonge Street in Toronto was crazy in seconds.

“There is no denying that hockey has an emotional pull among Canadians,” Costello said, smiling.

Barton agreed. As a young hockey player, he said he met all kinds of other kids his age in the region.

Murray Costello has also been a key member in the growth of the Hockey Hall of Fame, serving on the Board of Directors since 1981 and, at one time, was a member of the Selection Committee. Now retired, Costello remains a member of the International Ice Hockey Federation Council, and is chairman of both the IIHF’s Medical and Technical/Arena committees. Previously, he had served on both the IIHF’s Statutes and Disciplinary committees and was its auditor for a number of years.

Murray Costello is the 93rd Builder to have been honoured by the Hockey Hall of Fame.