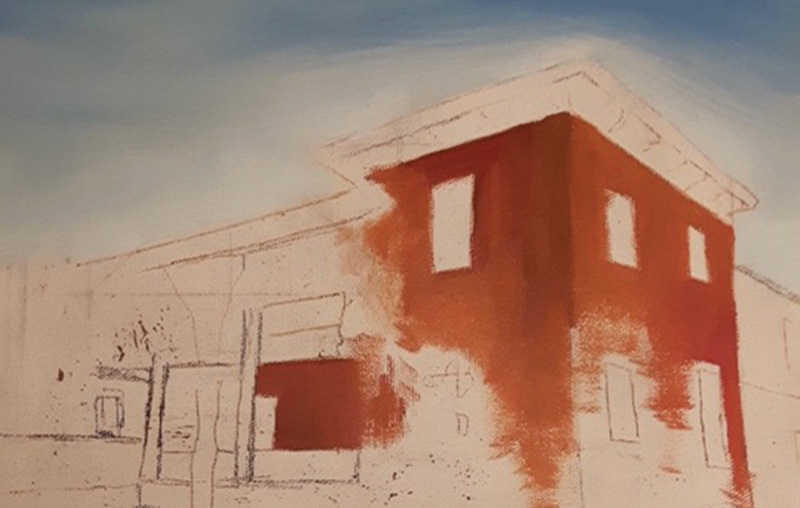 The artists responsible for, “The Houses of Vankleek Hill” are officially launching their how this Saturday, October 13, from 2 p.m. to 4 p.m. at Arbor Gallery Cultural Centre in Vankleek Hill.

The artists who have been working on paintings for the upcoming show called, “The Houses of Vankleek Hill” have been keeping their work under wraps for the most part, says show curator Linda Scott Harris. The show, which runs from October 3 to November 4 at Arbor Gallery in Vankleek Hill, consists of works by her art students, but along the way, other local artists have joined the show. Note that the show has been extended to remain in place during the Vankleek Hill Christmas Home Tour.

In all, 13 artists, including Scott Harris herself, will have works depicting local houses and a few architectural details, too.

Scott Harris teaches painting in Hawkesbury, with an emphasis on learning to paint following the grand masters of painting as a method of learning technique, perspective and colour to ultimately discover one’s own personal style. While she encourages the use of oils, she also teaches drawing and watercolour.

The show is one of The Review’s 125th anniversary events, making The Review the main sponsor of this event.  Artists include Eva Levesque, Rosemary Harden, Jeff Turner, Clara Taylor, Gail Hocquard, Lorie Turpin and Louise Sproule, (all students or former students of Scott Harris) and Linda Scott Harris herself, along with local artists Kim Fournier, Fran Bailey, Jill Crosby and Maggie Dean. Photographer Reenie Marx will be showing some of her photographs, all, of course, with Vankleek Hill houses as the subject. There are also a few paintings on loan to the show – also of local homes – by Jackie Shelly and Robert Field.

Scott Harris says that Sproule is one of her students and approached her with the idea earlier this year.

“She asked if I would be willing to ask my students to participate, and so, I did,” said Scott Harris, who has been guiding students through the choice of subject and the completion of paintings for the show during the past several months.

“Many of the students walked around town and took photographs to work from. Others borrowed photographs and Reenie Marx shared some of hers with us. One of my paintings is from a photograph taken by Louise,” said Scott Harris, adding that some of her students have painted particular details from a house that caught their eye while they were walking around the town.

“We are encouraging town residents to stop in to see the show. Who knows? If you live in Vankleek Hill, you might see a painting on the wall that depicts your home?”  Scott Harris said.

An added feature to the show is a walking tour which will take you around town to see the homes depicted in the art show — in real life. Thanks to Michelle Landriault of the Vankleek Hill Historical Society, you can pick up a printed guide for the walking tour at Arbor Gallery.

You can see the show and meet the artists at a vernissage taking place on Saturday, October 13 from 2 p.m. to 4 p.m. at Arbor Gallery. Musician ian hepburn will be playing harp during the vernissage. Arbor Gallery is located at 36 Home Avenue in Vankleek Hill. The gallery is open Wednesday through Sunday, from noon to 4 p.m. and includes a gift shop, featuring art, cards and artisan items. You can find out more about the not-for-profit gallery at www.arborgallery.org.