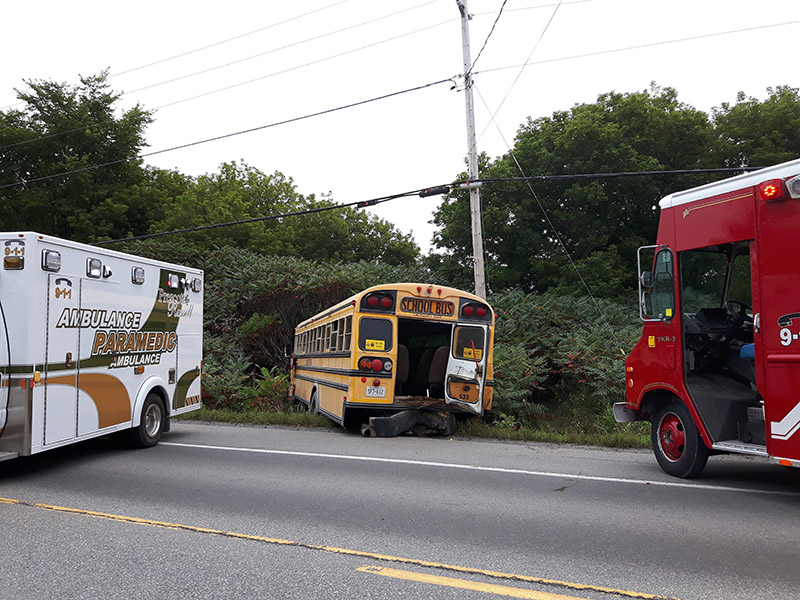 The driver of a tractor trailer, a 51-year-old male from Toronto, has been charged under the Highway Traffic Act with Careless Driving, following investigation of an accident on Highway 34 north of Vankleek Hill; the incident involved four vehicles, including a school bus with children passengers, on September 19.

At about 9 a.m. on September 19, a school bus with 25 children inside landed in the ditch on the east side of Highway 34, not far from Pleasant Corners Public School. A tractor trailer and two other vehicles were involved. Highway 34 was closed to traffic but re-opened at 12:30 p.m.

Four students were transported by ambulance to local hospital with non-life-threatening injuries, while other students were taken to the hospital by bus as a precautionary measure. The school bus driver sustained non-life-threatening injuries and was transported by helicopter to a hospital in Ottawa. At press time, he had been released from the hospital; his jaw was broken as the result of the crash.

Occupants of other vehicles involved did not sustain injuries. The accident involved two vehicles, a school bus and a transport truck which were all headed north on Highway 34 just before 9 a.m. on September 19.

An eyewitness said her children had just crossed Highway 34 and boarded their school bus at about 8:55 a.m. There were two stopped cars behind that bus, and then another school bus, also stopped. She said that the transport truck struck the bus, which then struck the two vehicles in front of it before landing in the ditch on the east side of Highway 34, barely missing a utility pole. The bus had just dropped off students at St. Jude Elementary School and was on its way to Pleasant Corners Public School to drop off more students. Firefighters and emergency workers were on the scene quickly and helped calm the students, who were worried about their driver. Children were assisted by bystanders to get out of the bus. Victim Services of Prescott-Russell attended the hospital to provide assistance and support to parents and students.

At Pleasant Corners Public School on Monday, September 24, a gathering was organized as a kind of completion to the incident.

The children who had been in the affected school bus, their parents, members of the Ontario Provincial Police, four Vankleek Hill firefighters and representatives of the school board assembled in the school gym on Monday morning. Pleasant Corners Public School principal Dominique Bertrand said that the purpose of the gathering was to acknowledge the bravery of the 25 students on the bus. Tokens of appreciation from the bus company were presented to the students, who were called one by one to collect them.

Upper Canada District School Board Superintendent Deanne Perry paid tribute to the leaders on the bus, first-responders and the community approach which was used to handle the incident.

“I know that at the hospital, everyone was well taken care of and food and drinks were made available. This was a terrible thing, but everyone worked together,” said Perry.

The community approach meant that there were “lots of arms around you,” Perry commented.

Vankleek Hill Volunteer Firefighter Captain Mark Henderson was one of the first at the scene last week addressed.

“You were sitting together, in the grass and you were scared, but you listened to instructions and you got safely off the bus. You were all seated in the same area, together.” “ I want to mention the bravery of the children. Some children were looking after other children,” Henderson said.

The Vankleek Hill Fire department had prepared gift bags to present to each of the 25 children who had been involved in the incident.

“You are safe on your bus,” Henderson said. “It’s always good to make sure you’re listening to your bus driver and sitting in your seat,” Henderson reminded the students.

Captain Ernie Roebuck also had a few words for the children and parents.

“The senior students did an awesome job,” said Roebuck.

“I saw the senior students taking care of younger students. You were all in one place when the principal arrived,” said Roebuck.

Assuring students that this was a rare incident, Roebuck said, “I have been a firefighter for just under 40 years and I have never seen a bus accident. I have grandchildren in this school and when I got the call, my heart was going. I want to thank you for a job well done,” said Roebuck, acknowledging that PCPS Principal Dominique Bertrand’s composure and calm, along with that of her team, made things much better.

Bertrand also acknowledged the three student leaders on the bus who had been trained for evacuation. They went from seat to seat, ensuring that everyone was safe and once they knew that, they set about helping children get off the bus, using both the front door and the rear evacuation door.

“You did all of that, when you knew that Mr. Quan (the bus driver) was not able to help you,” said Bertrand.

T-shirts were distributed to the police officers and first responders as appreciation for the care given that day. (This newspaper received one too, as thanks for positive reporting that day.)

After the conclusion of the debriefing with the students, Bertrand took a few moments to review that day and the days that followed.

Her priority that day was to ensure that all students were accounted for. Heading to the accident scene immediately, she called back to the school to check on students who were not at the scene. At the start of the school day, she wanted to be sure that if children were ill, or at day care, that everyone was accounted for quickly before parents were contacted.

Bertrand stayed at the scene, then went to the Hawkesbury and District General Hospital, where she stayed until the last child had been scene and sent home. As parents were contacted, they were told to go to the hospital, Bertrand said.

A school board superintendent and two other administrators spent the day at Pleasant Corners Public School, she said. There were two or three meetings during the day to update teaches and staff members. The Upper Canada District School board chief psychologist was also at the school the day of the incident and the day after to provide support.

“But we wanted to keep things as close to normal as possible,” she said.

Not all of the children who were on the school bus that day have returned to school. There have been a few head injuries (concussions) and some children were still at home, although Bertrand said they should be returning to school soon.

After spending the day at the hospital, Bertrand says she called the parents of all the children later that evening, so let them know they were thinking about them and to say that she would be riding that bus route the next day (Thursday), along with vice-principal Karen Nadeau.

“We wanted them to know that the bus was a safe place to be, so we got off at each stop, greeted the parents and walked back on the bus with the child,” said Bertrand.

She says that Mark Henderson has been her point of contact from the very beginning and that he has been exceptional.

“He checked back with me on Wednesday to make sure we were doing okay — even checking on us adults,” she said.

It was a parent who stopped at the office Wednesday morning to advise them that there was a school bus accident just up the road.

Her first thought was “Is it one of ours?” and she went to the scene, not knowing what to expect.

She was calm at the scene, she said.

“I had a job to do and I knew the kids were looking up to us. We told them this was unfortunate, but we’re okay,” Bertrand recalled.

“I know these are not full-time firefighters, and I know we have a small hospital, relatively speaking, but everyone was well-prepared and we were very well attended at the hospital. We make emergency plans but we hope never to use them,” she added.

“This was one of those times where the community came together – from bystanders, to the school staff, parents, first-responders, hospital staff.”

“Today, we hoped to put some closure to the incident,” Bertrand ended. 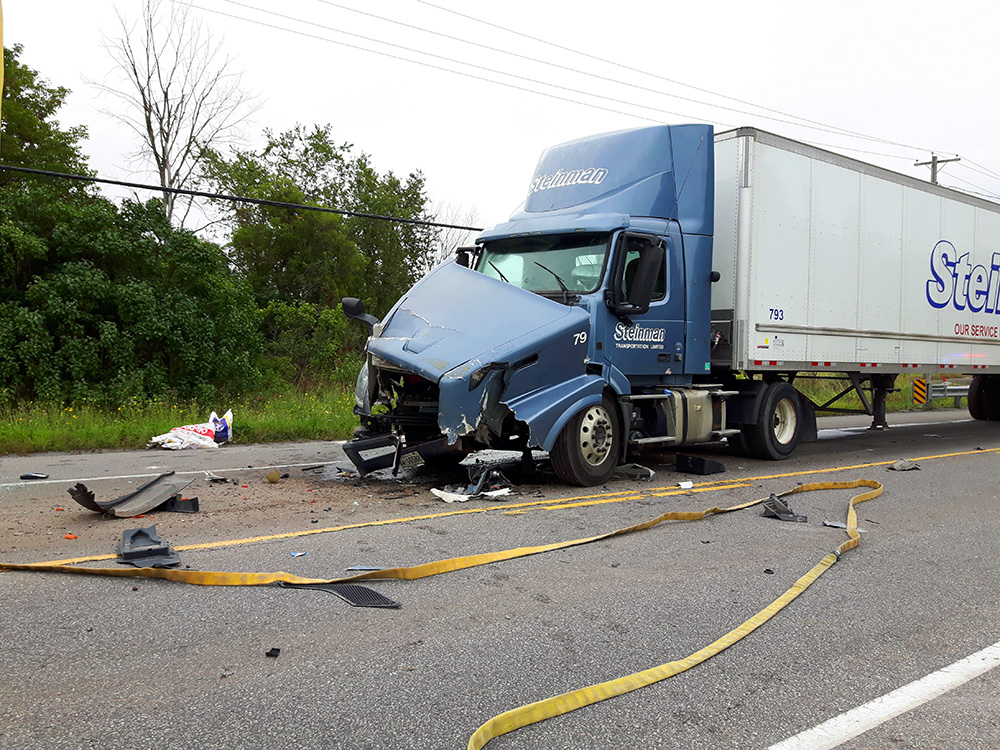 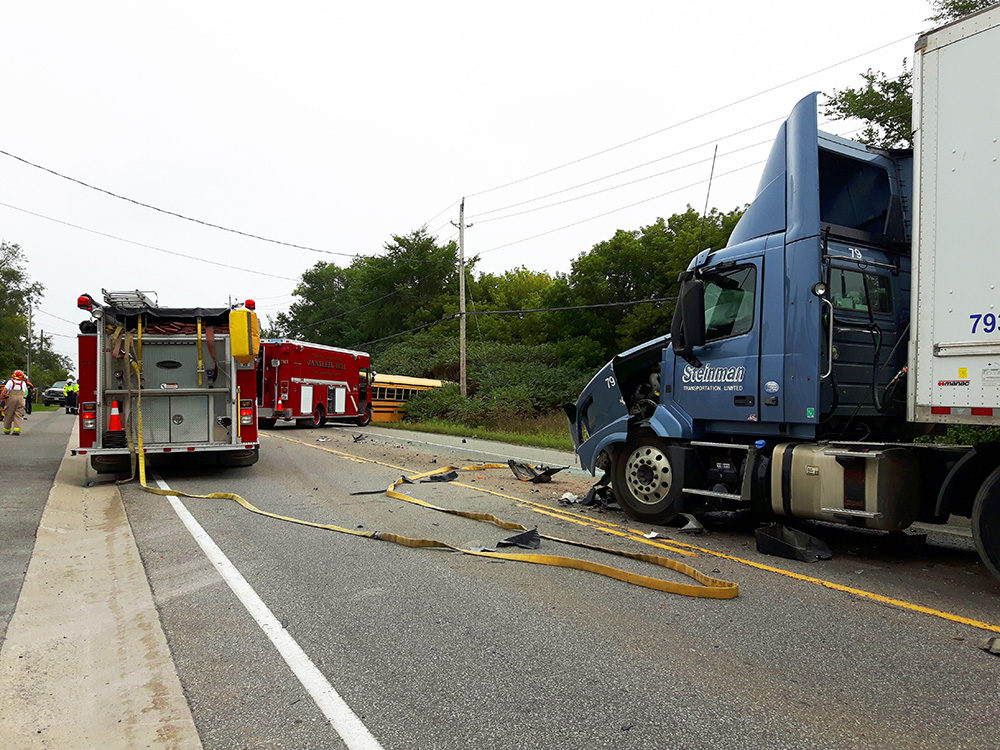 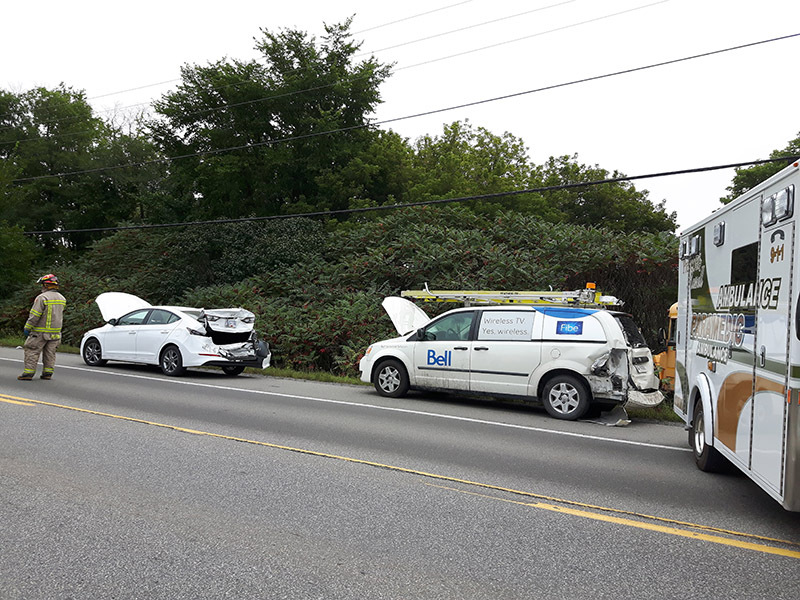 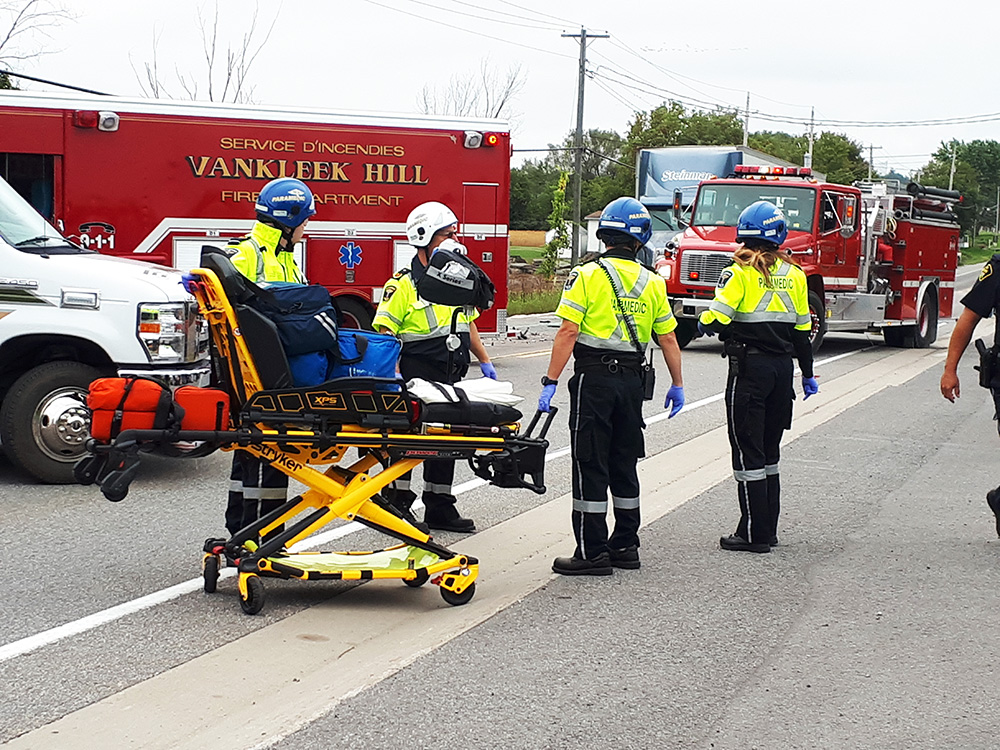 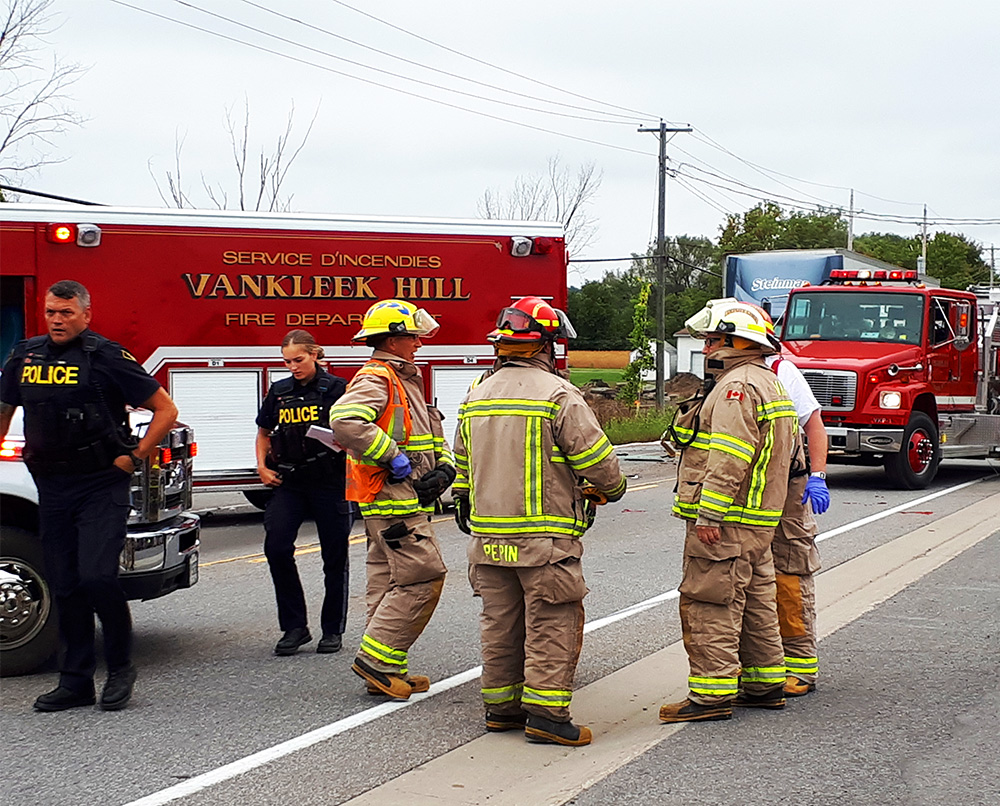 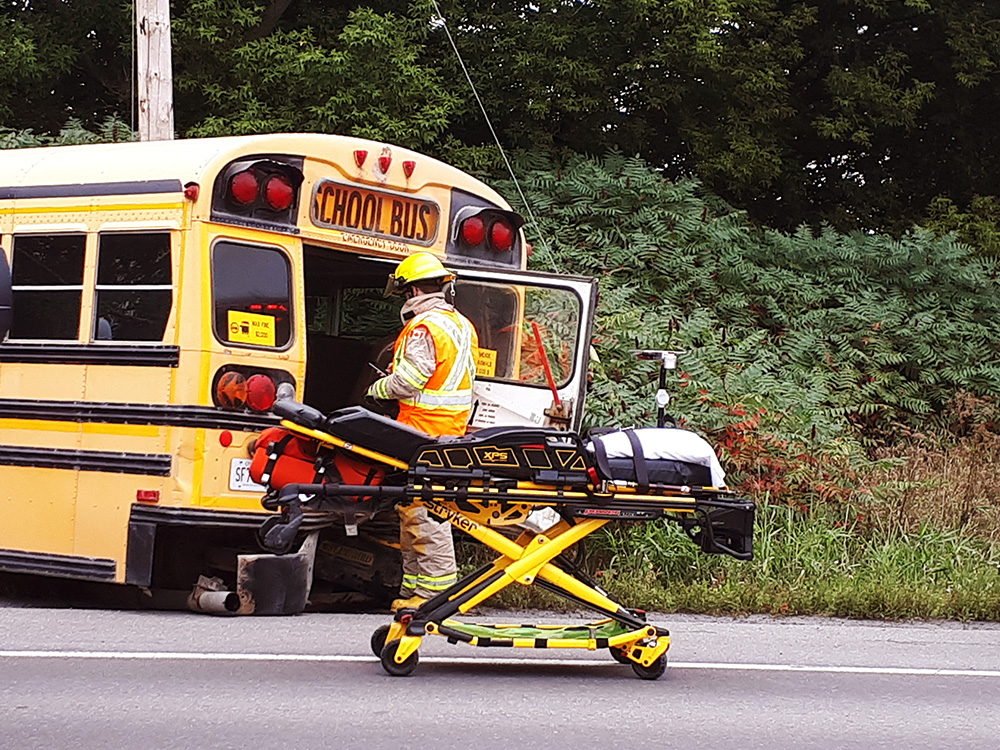 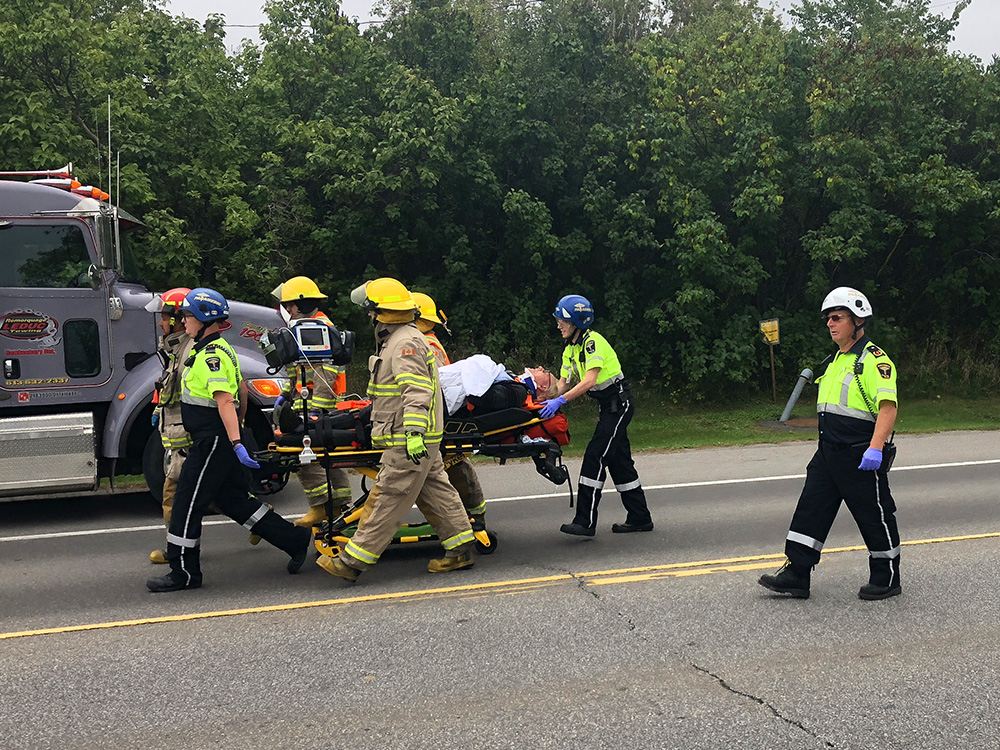 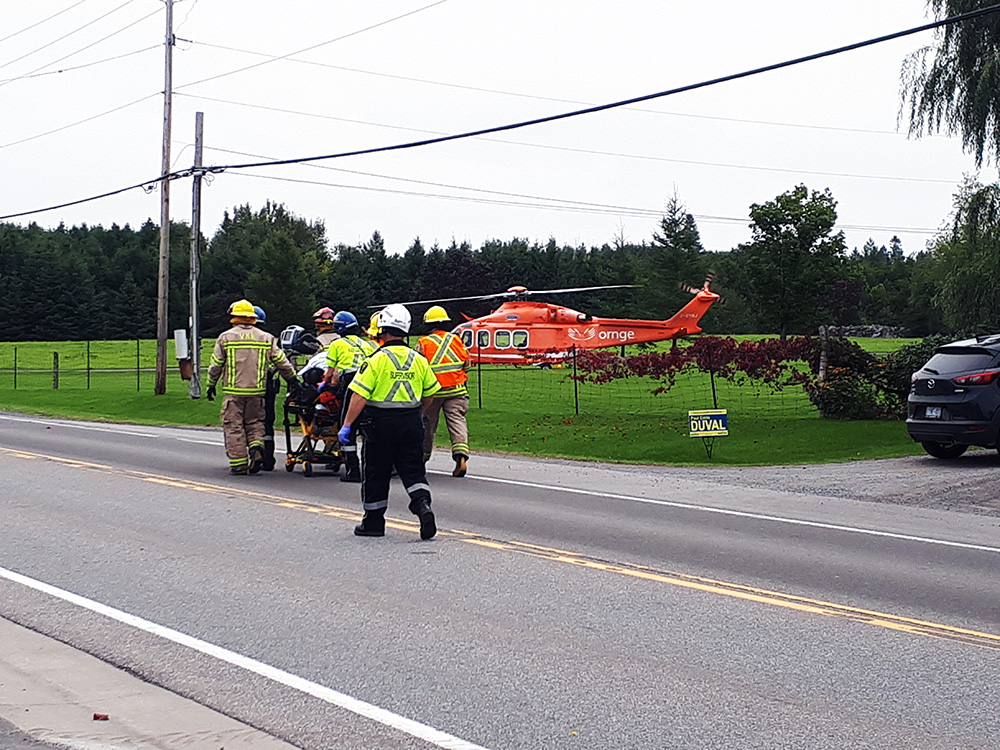