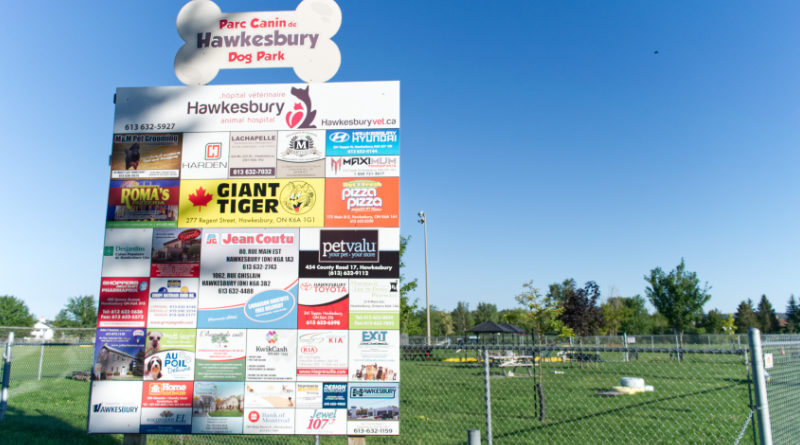 The Hawkesbury dog Park Committee will be offering a complete basic obedience course for dogs, representing six hours of class, for 60$ as a fundraiser for the park.

Man’s best friend has a cozy home in Hawkesbury.

The local dog park – a must for any fan of canine socializing – has amassed quite the positive reputation, attracting dog owners from all around in a safe environment.

For this type of attraction, success is far from being accidental. It is largely due to a group of volunteers, the committee in charge of the Hawkesbury-owned park, and their hard work fuelled by love of our loyal furry companions.

It is through this skill coupled with Larocque’s fantastic reputation as a trainer that the committee came up with an idea for its latest fundraiser.

For the price of $60, the committee will be offering a complete basic obedience course for dogs, representing six hours of class. The classes will be offered by Larocque herself and all proceeds will go directly to the dog park.

For the love of dogs

Laroque has been training dogs since 1978. For her, it’s a passion that started back during childhood, manifesting itself then through great love and empathy for her neighbourhood’s strays.

“Back then, I took a course with Gilles Chartier, who was the only known trainer. He even appeared on TV with his dog. Since then, I’ve been training dogs myself. Even I appeared on TV once, in a show called Qui dit vrai?, since I was the only woman trainer at the time,” said Larocque.

“I adore dogs. I know them. It’s not something you do for the money; you need another job. Still, I had two schools in Hawkesbury over the years. One was in L’Assomption school for a few years, then behind M&M Pet Shop. Nowadays, I go directly to people’s homes to give private classes. I allows me to train the dog… And its owner!”

For Larocque, it’s simply astounding how much dogs give back to humans. In an article she wrote titled The Dog – Man’s Best Friend, Laroque states: “No other existing animal has ever been so helpful to man than the dog in the past, and still today in so many different ways. The Dog never ceases to give man unconditional love.  We owe it to him to see to his needs by giving him:  love, care, discipline, patience, tolerance, consistency and the understanding and respect of his own language.”

If anything, decades spent training dogs has only bolstered Larocque’s enthusiasm toward dogs. She is constantly working to improve the lives of dogs (and their owners) in the area and always comes up with new ways to do it.

“I’ve been practicing zootherapy and would love to bring it to the Prescott & Russell Residence. They have someone from Ottawa that does it once in a while, but I want to do it once a month. We could bring it to schools as well,” explained Larocque.

One doesn’t have the opportunity to chat with an experienced, professional dog trainer every day. When asked what her favourite breed for training was, Larocque didn’t hesitate.

“German shepherd. Very intelligent. Great potential. I had one for 13 years. Nowadays, I have a Royal Poodle and when I ask it to fetch something specific, I can see its brain working; thinking. He ends up getting it right, but the german shepherd would bring the right thing back right away.”

For Larocque, there is no “worst” breed of dog. They are all worthwhile, each having their own perks and useful traits.

“I don’t believe in all this nonsense about pitbulls. Did you know that they were once called Nanny Dogs? The name says it all. It was a great dog for children. Man’s stupidity, with things like dog fighting, gave it its bad reputation. I’m firmly against training dogs to be aggressive in any way. It’s like having a weapon you don’t know how to use. Dogs don’t need to be trained to defend you, they’ll do it on their own,” explained Larocque.

Finally, when asked what the one important thing for any dog owner to learn to do with their dog is, Larocque said: “It’s important to exercise with your dog, so it needs to learn to walk at heel properly. It’s the first command they have to learn and the hardest. Dogs are herd animals, they want to lead, but you’re walking the dog… Not the other way around.”

It’s easy to see why this fundraiser is a fantastic opportunity for dog owners. Not only will funds be used to care for our canine friends’ local haven, but Larocque’s classes will undoubtedly strengthen the bond between dogs and their owners.

Anyone interested would do well to reserve today, as places are limited. Larocque’s class can accommodate 20 and at the time this article was written, eight places were already reserved.

To reserve your spot, contact Larcoque directly by calling her business number, 819-242-9216. One can also register by email by contacting committee member Lynda Besner at [email protected].

More information can be found on the park’s website, hawkesburydogpark.com. Any dog owner would also do well by visiting another website launched by the Hawkesbury Dog Park Committee, hawkesburydog.com, an incredible hub of information including articles, contact info on vets, stores and classes, breeders and information on adoption.