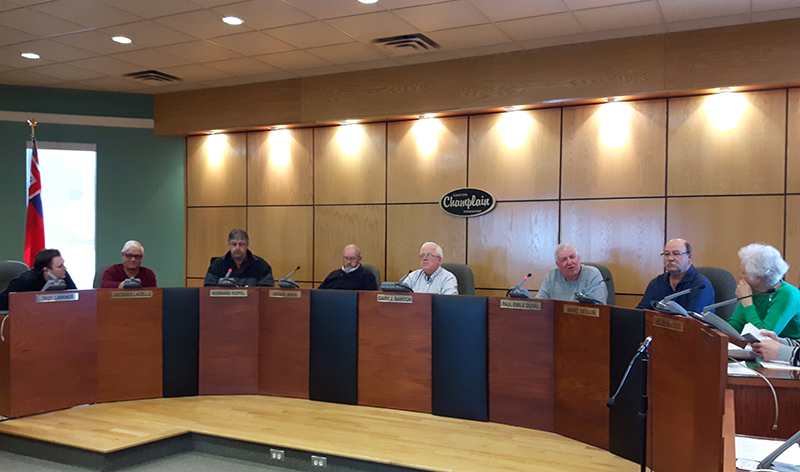 Action Champlain, which is opposed to a proposed cement plant to be built in Champlain Township, is pulling out all the stops as it prepares for the upcoming Ontario Municipal Board hearing happening in September. Between 150 and 200 people met at École St-Jean-Baptiste on April 12 for an update from the Action Champlain lawyers and to discuss fundraising.

The Review spoke with one of Action Champlain’s lead organizers, Charles Despins recently to find out what’s next on the group’s agenda.

Despins said that the lawyers provided an update and that citizens had many questions, so that the meeting lasted about three hours. About half of that time was dominated by questions from the crowd. And it was great to see people so involved, Despins said.

“This issue is touching people very strongly,” he added.

“The lawyers gave an overview of the process without unveiling our strategy,” Despins said. “People want to know what our chances are,” Despins said.

Within the next few weeks, Despins said that fundraising will be going full-tilt, as the group strives to raise about $225,000 for legal fees and to pay for expert studies which it will need at the upcoming Ontario Municipal Board (OMB) hearing, set for September.

Why is there such a big push on right now? Despins said that preliminary documents, including information related to expert studies, must be submitted to the OMB by May 31, 2018.

“We have our quotations and we are working hard to go back to the folks who helped us out last year. It’s tougher,” Despins says, but from the sound of things, the group is getting there, having already amassed about half of what it needs from a big push, he says.

Members gathered at one of the member’s homes and Despins said it was like a call centre as between 12 and 15 people connected with would-be supporters of Action Champlain.

Action Champlain recently received $50,000 in support from Champlain Township, which is not a party in the OMB proceedings.

The OMB hearing: a double-header

Two OMB appeals are being heard as part of one hearing, beginning on September 4 and which may last up to five weeks. Colacem, the proponent of the cement plant, is appealing Champlain Township’s decision which did not approve a zoning amendment required to allow the proposed plant to move ahead to the next stage.

Despins emphasized that Action Champlain is only as strong as its members.

“We have no decisional power,” he emphasized. Everything that the group does is directed by its members.

“This is just an entity to mobilize people.”

Speaking of mobilizing, Action Champlain is on the lookout for more volunteers.

“This is very short-term. And we need more volunteers. We need help to follow up with people and do some very basic stuff,” Despins said, emphasizing that the group will not be dispatching volunteers to necessarily go door-to-door.

To get in touch with Action Champlain, email: [email protected]

If you would like to make a donation (all donations are confidential), you can mail your cheque to: Action Champlain, P. O. Box 71, L’Orignal, Ontario, K0B 1K0. Cheques should be made out to: Caza Sakailey in Trust. Indicate on your cheque (Defense of Action Champlain)

At its April 10 council meeting, Champlain Township approved its new zoning by-law, but postponed approval of sections which had been adjusted at the request of members of the public during its consultations.

The township’s zoning by-law previously included specific mention of “steel mill” and “cement plant” as possible uses. The mention of “cement plant” had been removed as a result of the public consultations. In the meantime, Champlain Township received a letter from a legal firm representing Colacem, pointing to several issues. The Review has requested a copy of this letter from the township but as of press time, the document has not been made available and may not be made public if it is related to possible litigation.

Champlain Township Mayor Gary Barton asked council if it would be willing to defer its decision on the parts of the zoning by-law in question while approving the balance of the by-law.

Barton said that he did not understand all the implications and thought that the township should get advice from its planner as well as obtaining its own legal advice.

Council approved its new zoning by-law, omitting proposed changes to sections listed verbally by municipal clerk  Alison Collard. Council will review the outstanding portions of the zoning by-law at its next meeting on May 8 if councillors have the information they need.

In the meantime, project developers, as always, would still have to request to change any zone to industrial.

You can view more information about the zoning by-law here. Appeals to the by-law can be made to the Local Planning Appeal Tribunal before May 8, 2018.