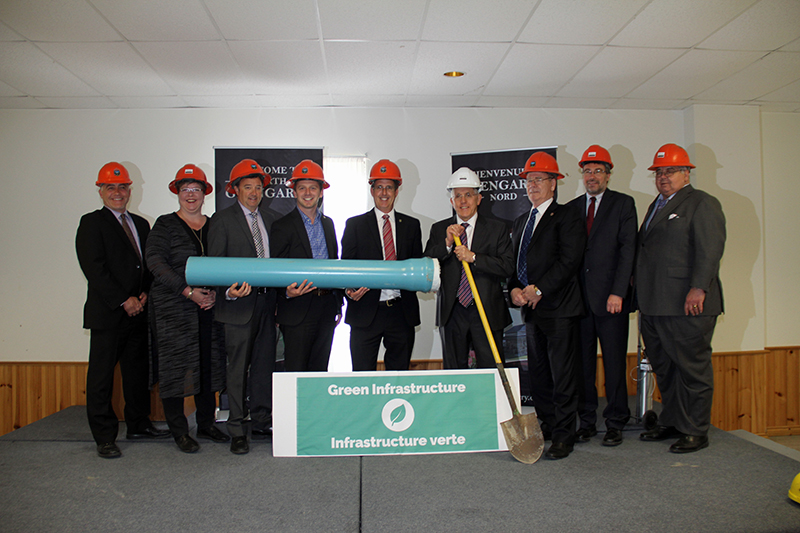 On May 26, 2017, Francis Drouin, Member of Parliament for Glengarry-Prescott-Russell, on behalf of the Honourable Amarjeet Sohi, Minister of Infrastructure and Communities, the Honourable Bob Chiarelli, Ontario Minister of Infrastructure, and Township of North Glengarry Mayor Chris McDonell, announced that two projects in North Glengarry had been approved under the Government of Canada’s Clean Water and Wastewater Fund. (Photo: Tara Kirkpatrick).

The first phases of a multi-million-dollar project to bring Alexandria water to Maxville are about to begin.

Earlier this month, the Township of North Glengarry awarded a $10.2-million water distribution system construction contract to Clarence McDonald Excavation Ltd. The company, based in St. Andrews West, will be responsible for installing water and sanitary services throughout Maxville.   This includes all water mains and services to the property line, road reinstatement and sanitary mains on those streets that do not currently have service.

Residents can expect to see significant construction beginning this spring, but work will continue through the summer and autumn and will end only next year. An information session is planned for May 10 at 7 p.m. at the Maxville arena to explain the various phases of the project.

Bringing municipal water and sewage services to Maxville will mean a big change for residents, none of whom are currently using municipal water. Some residents are still using their own septic systems. No properties have water meters.

North Glengarry Public Works Director Ryan Morton cautioned that sewage connections are being taken only to residents’ and businesses’ property lines. Obtaining permissions to connect to the municipal system is another step and requires approvals from the Ministry of Environment. These connection costs will be paid for by property owners.

About 90 per cent of the town is currently connected to the municipal sewage lagoon system, which was built in about 1988-89, said Morton.

The distribution system contract was tendered earlier this year; four bids were received on April 10. Clarence McDonald Excavation Limited submitted the lowest bid. On behalf of the municipality, engineering firm J.L. Richards and Associates Limited determined that the winning bid was in accordance with the tender requirements issued by the municipality.  Council voted in favour of the lowest bid, which was recommended by township staff.

“Awarding this contract is a major milestone for this project,” said Morton, who estimates the final cost of the Maxville infrastructure, water tank and tower and transmission line at about $30 million.

The next major milestone will be the construction of the water transmission main from Alexandria to Maxville; that project is currently in the design phase and planned to go out for tender by the end of May.

In January, council awarded a $1.9-million contract to Landmark Structures to construct a new water tower in Maxville.  That work is expected to begin around May 14, 2018. The water tower was tendered and only one bid was received on December 21, 2017. This is not unusual given that there are a limited number of companies specializing in this service in Canada. Painting was not included in the cost of this tender and the municipality is continuing to finalize the artwork that will be included on the water tower, which will be located near the Maxville Veterinary Clinic on County Road 20. Construction of the water tower, which will serve as a storage tank, is expected to commence this year.