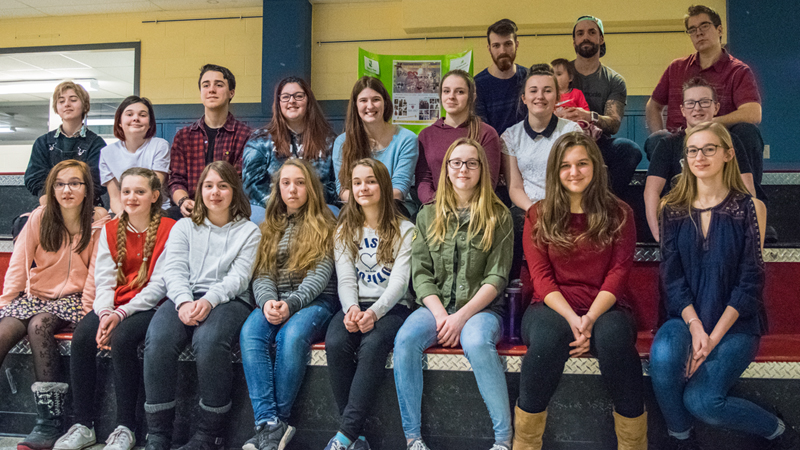 Lachute’s Pour toi… show is in its fourth year. The 2018 edition promises a show that will be bigger and better, with a variety of numbers including live music, singing, dancing and stand-up.

The fourth edition’s roster is comprised of 20+ artists, most of which are local students and alumni. These students are also mentored by special guests Tova and Carl De La Barre & band.

Every year, Pour toi… aims at raising funds and awareness for a specific cause. The past two years were dedicated to hematology-oncology (blood diseases and cancer), but this year the show will be amassing funds for the home palliative care department through the Hôpital d’Argenteuil Foundation.

“Over 1,000 people benefitted from Hôpital d’Argenteuil’s home care services in 2017-2018, with 662 still active. Not all of those are in palliative care, but there is an increasing demand for this type of program,” said Élise de Sève, Foundation Donation and Event Coordinator, at a press conference held at Polyvalente Lavigne, the show’s chosen venue.

The show is organized by 18-year-old Kellyane Blain, who has been at the helm of Pour toi… since its first edition in 2014. She was 14 years old at the time.

“Back then, the idea had been on my mind for a while. I didn’t think the Polyvalente’s end-of-year show was enough. My mom suggested I organize something even though I was quite young at the time,” said Blain.

Love for the stage wasn’t the only thing driving Blain. For her, the show had to be about helping others.

“Back in 2014, we had just learned that my grandfather had cancer. That’s why the chosen cause was hematology-oncology back then. The show was meant for him, for his birthday, which was in March. Sadly, he passed away before the first show, so it became an homage. Pour toi… (For you…).”

Since its first edition back in 2014, Pour toi… has amassed over $10,000 for the Hôpital d’Argenteuil Foundation.

The fourth edition of Pour toi… will be held on Friday, March 23, 2018, at Polyvalente Lavigne. Tickets are $10 for those 12+ years. Admission is free for those under 12 years of age.

Tickets are on sale at Lachute’s Théâtre des petits bonheurs, the Méli-Mélo Rigilo store, through any participating artist of via Kellyane Blain herself, at 1 450 562-3272.