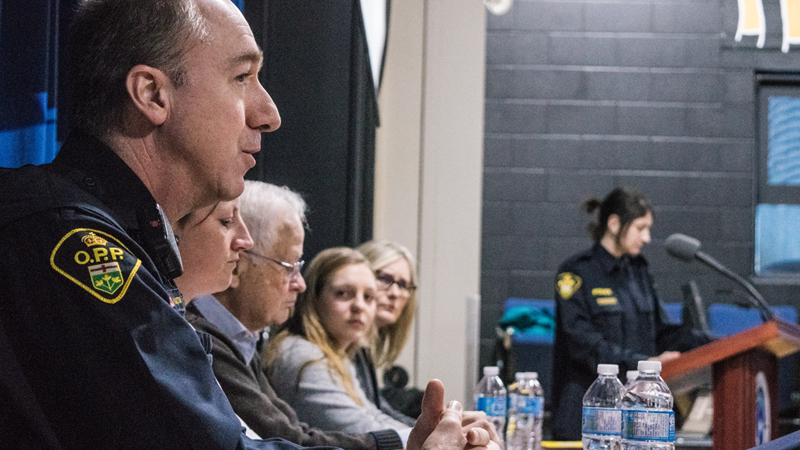 The Regional Action Committee for Safety (C.A.R.S.) is bringing its IMPACT Drug Prevention Program to Hawkesbury.

Fairly new, this year will mark the second edition of IMPACT, a program that aims at informing and educating the community on personal safety and the dangers of drugs and alcohol consumption. For now, the program is entirely in French, but C.A.R.S. is hoping to offer it in English in the near future.

During a press conference held at École secondaire publique Le Sommet on February 8, 2018, representatives of C.A.R.S. announced that this year’s edition of IMPACT would be held at Le Sommet on Saturday, March 3, 2018.

The press conference was headed by Constable Cynthia Savard, who kick started the proceedings by inviting every student present to show up and bring their parents.

“That’s why we’re doing this on a Saturday. We want the message to be clear for both children and their parents. Teenagers may think their parents don’t really understand anything, but by showing up together, at least they’ll be on the same wavelength.”

Amidst the topics to be covered at the event will be communication, risks and consequences.

An initiative based on need

Among the panel was Sabrina Rodrigue, Emergency Services Supervisor for the United Counties of Prescott and Russell, who underlined the importance of C.A.R.S. and IMPACT with some disappointing statistics.

“In 2016, Prescott and Russell paramedics had 90 cases of overdose. Sadly, 2017 saw that number rise to 131. We believe that this type of activity can help keep this number in check.”

To accomplish its mission, IMPACT has acquired a wide array of participants and speakers for their event, including the OPP, the Berthiaume Family Funeral Home, the Prescott and Russell Emergency Services, the Hawkesbury Fire Department, HGH’s Mental Health and Addictions department. Retired Montreal Habs player Guy Lafleur is also scheduled to appear and give a talk.

Josée Drouin, Assistant Principal at Le Sommet, said that the school is “quite happy to be part of the project” and stated that the school’s improv team had a few things in the works for the event.

Angelica Cusson, a grade 12 student who is also part of the improv team, has already contributed in promoting the event. When asked what motivated her to play an active role, she said:

“It’s about sending a message ‘to students by students’. A lot of people think that teenagers know everything about drugs because we’re often targets, but it’s not true. Too many are misinformed.”