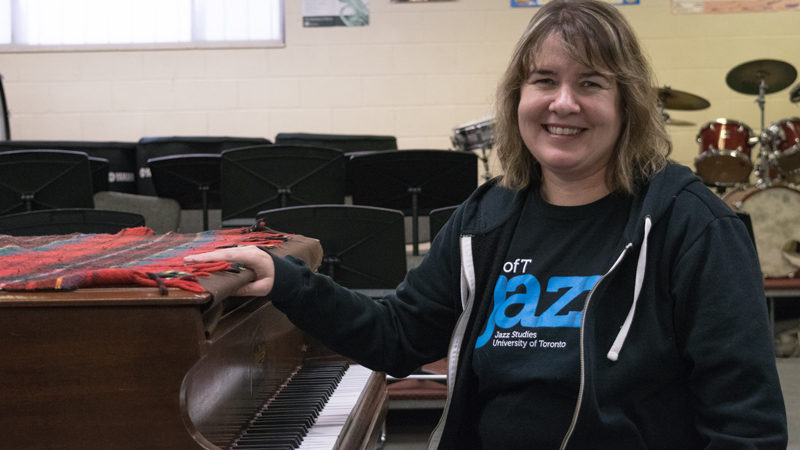 Liz Caddell has been teaching and sharing her passion for live music at GSHS since 1999. Photo credit: Cedrik Bertrand

For Elizabeth “Liz” Caddell, this simple, obvious truth is also the source of her passion. A passion she is constantly sharing.

A soft-spoken, behind-the-curtains local legend, Caddell spends most of her time at Glengarry District High School in Alexandria (GDHS) as a music and drama teacher.

“I grew up here. I was a student here, in this very school, when I decided I wanted to be a high school music teacher.”

After obtaining a bachelor’s degree in both music and education from Queen’s University in Kingston, Caddell didn’t waste any time fulfilling her long-time dream.

“After university, the only full-time high school position teaching music was in Belleville, Ontario.”

Back then, in her mind, Belleville was going to be a short career pit stop on her way back home.

“I stayed there for nine years. When a position opened up at GDHS, I came back.”

Caddell’s musical background is quite deep-rooted, dating back to her childhood.

“I started piano lessons at age five with the sisters here in Alexandria. Then, in grade nine, I started trombone, saxophone and bass. I eventually majored in trombone at Queen’s, where I learned to play different styles, including jazz, classical, pop… Everything.”

To say that Caddell is a profound lover of music is more than accurate, but also an incomplete truth.

“In grade eleven, I was invited to perform in Cornwall, on trombone, in the pit band. It was Bye Bye Birdie, my first involvement with a musical. It was so much fun!”

For Caddell, it always comes back to the “live” aspect, to sharing. This, combined with her great appreciation for musicals, gave her the drive to helm countless musical theatre productions during her career as a teacher.

“In 1999, my husband and I both started teaching at GDHS and we started up the first musical ever done at our school,” said Caddell, adding that “we did it in Belleville for a few years and it was very successful.”

In the year 2000, Caddell’s first musical production hit the GDHS stage; the appropriately named Leader of the Pack. She had already done this production back in Belleville, but since the concept was new to GDHS, she faced new and unexpected challenges.

“My husband was the director and he had to go to our principal to ask for some money to pay for the rights to the script. It’s usually thousands of dollars. They thought we were crazy.”

These doubts didn’t stagger Caddell’s confidence. When asked if they thought they could pay it off, she simply answered: “We’ll pay it off.”

And pay it off she did. Despite humbly stating that her goal is always to break even, Caddell’s productions always manage to amass enough funds to help pay for the following year’s rights purchase.

In terms of portfolio, Caddell and GDHS have amassed quite the collection of titles, with classics both new and old such as Saturday Night Fever, Bring It On, Dracula, The Wedding Singer and Grease.

“The biggest crowds we had were for Grease. I believe it was 2005. There were not enough chairs. The word got out, people kept coming back. It was huge!”

According to Caddell, the average crowd of spectators numbers between two and three hundred. Every production goes on stage for three presentations.

2018 promises to be an interesting year at GDHS, for Caddell and her team will be taking on Annie.

“Every year, I wait until September and see who I have as participants. I called meetings and we decided, together, that Annie would be the best for this year.”

Each production comes with its own set of challenges, and Annie is no different. For Caddell, these new challenges simply make things more exciting.

“There’s a dog part and I’d like to have a real dog on stage. We never did that before.”

Apparently, a few students and their parents are willing to let the family dog try its luck, but Caddell is open to have a professional trainer help out, if willing to volunteer some time.

“Annie has a lot of unforgettable songs,” said Caddell. This fact is certainly appealing to the music teacher, who stated that for the school band, Annie represents a new challenge.

“We very often have guitar; a rock band. This is more ‘big band’.”

The challenge also extends to all the other students, teachers and volunteers helping out, from technicians to craftsmen, artists, dancers and, of course, actors, who have been rehearsing for months already.

Music for the community

Even though she spends countless hours at school, Caddell can also be spotted throughout the community, sharing her love of live music.

“I also play the pipe organ at St. Finnan’s Cathedral every Sunday at 11 am. I’ve been the organist there since ’99.”

Caddell and her husband are also the masterminds behind Concerts at the Grotto, an organization managing a series of concerts at a venue called the Grotto, in Alexandria, an idea that started as a simple fundraiser back in 2016.

“The goal was to restore the Grotto. It was crumbling; they were gonna tear it down. So, we started booking concerts where the musicians would play for free while we collected money. We raised $35,000 and paid to restore the Grotto and the statues. It’s really nice now!”

Concerts at the Grotto is held in the summer and will be returning for both July and August 2018, on Wednesday evenings.

“It’s amazing how many people come,” said Caddell, inviting everyone to “check out Facebook – Concerts at the Grotto. All the info’s there.”

Even though Caddell remains humble in the face of her success, it’s quite clear that she was right all along.

Those interested in joining the Concerts at the Grotto line-up may contact Caddell directly via email, at [email protected]