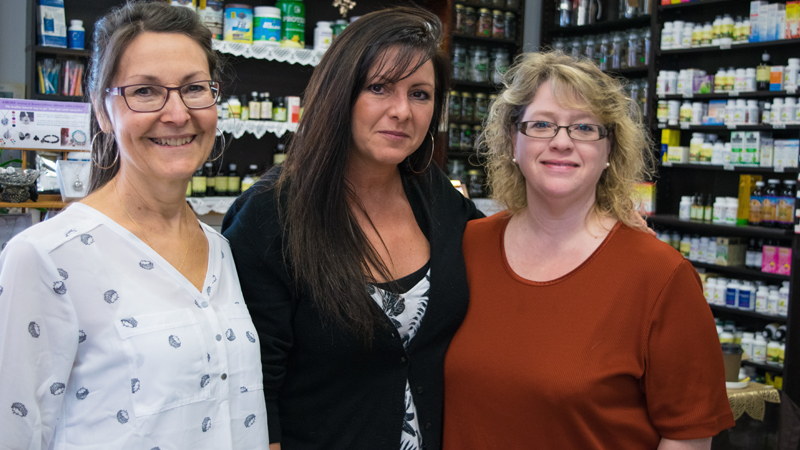 The Chakaura Institute of SOUL and its retail counterpart, Amore Tea House and Apothecary can now be found at 765 Cameron Street, in Hawkesbury, in a vast, newly-renovated locale.

On top if its wide selection of herbal teas, smoothies, incense, oils, bath salts and books, Amore features a plethora of natural items hand-crafted by St-Amour herself, including soaps, salves and lotions.

“My latest creation is a whole new line of naturopathic medicine,” stated Michèle St-Amour, Founder and Director of both Chakaura and Amore.

“I’m also preparing a complete line of crystal elixirs by taking the essence of crystals and putting it into homeopathic products. These new products will be available in the spring of 2018.”

Even though the new locale opened its doors in November 2018, St-Amour is already making plans for the future of the tea house.

“Right now, we offer little snacks. In the spring, if everything works out, we’re looking at offering lunch on Wednesdays, Thursdays and Fridays. People could come in and have home-made food.”

A little something for the community

On top of being a shop, clinic and educational centre, the vast new locale also doubles as a community centre, with many spaces available to those interested.

“We’re opening our doors and offering space. If someone wants to give a conference or if a group needs a place to meet, we have space. It’s about creating something for the community,” said St-Amour.

While the community centre aspect is fairly new, the Chakaura Institute has been offering services for almost eight years. St-Amour’s practice, however, dates back to the year 2000.

“I love it. It’s so fulfilling,” said St-Amour, when asked what drove her all these years. She added “it’s a perfect exchange of energy.”

St-Amour’s passion for her mission is catching. Since she started, thousands have benefited from her knowledge, transmitted through countless seminars, classes, workshops, therapeutic services, self-development and self-discovery programs. For her, success is defined by more than sheer numbers.

“Every time I see a person’s light go on, letting go of something that’s painful… There are things to be done to help humanity and we could play an important role in that.”

Some of Chakaura’s success stories are indeed hard to believe.

“We’ve had beautiful moments where people have cured things over a weekend. Once, a four-year-old came to the clinic with a tumor growing out of her head. She had just been to CHEO and they wanted to start aggressive chemotherapy. Her mother was an Olympic athlete and her mother-in-law said, ‘bring her to Michèle’. Long story short, she started healing the next day and in three months, the tumor was gone. At six months, not even a scar. The doctors were freaking out. ‘What the heck did this woman do?'”

The Chakaura Institute’s doors are not only open to the sick, but to “anyone who feels drawn or ready to make a commitment to themselves, to finding a new way of approaching life.”

Today, with the Institute’s new space doubling as a community centre, that statement is truer than ever.

Anyone interested in learning more about the Chakaura Institute of SOUL and Amore Tea House and Apothecary is invited to visit St-Amour’s website, michelestamour.com.