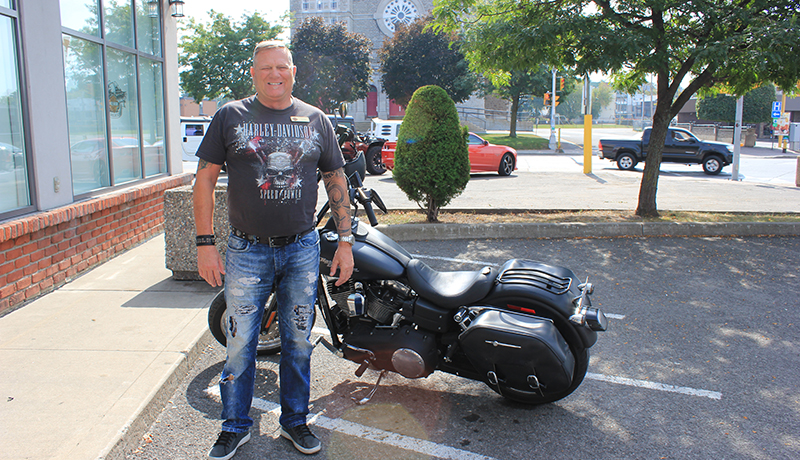 Yves Charlebois, one of the organizers of Hawkesbury’s Bike Fest, sent an email to the Mayor to ask if she could get council to approve and support the dates for the next Bike Fest in 2018 as soon as possible so that the organizers can start preparing the event.

In his emailed request, he also asked to have only one liaison person between the organizers and the town as to reduce the amount of back and forth during the organization, which he felt was excessive at times and hindered their ability to properly plan the event.

At council meeting of September 25, Mayor Charlebois read aloud the request for support and asked council members if they had anything to add before going for a vote. Councillor Ouellette brought up the fact that there hasn’t been a post-mortem meeting to discuss various topics about this year’s edition and that it would be wise to have that meeting before voting to approve the new dates.

“I agree with Mr Ouellette that a post-mortem was needed, but I believe that he [Yves Charlebois] needs this to be approved quickly in order to move on with the various requests and paperwork for next year’s event,” said Councillor Yves Paquette.

This prompted Councillor Johanne Portelance to mention that she did not like the tone of the email and that she didn’t like being threatened.

“The way Mr Charlebois approaches this is by giving us an ultimatum and we have to say yes or no right away without wanting to participate in a debriefing,” said Portelance.

“I think we should meet in the end of October to meet up and put all the cards on the table” replied Councillor Chamaillard.

“I agree with Councillor Portelance. I spoke with the chief of police and she also had a few things to say about the event. I believe it’s important that we talk to all the people involved, there are things to consider here, we can’t just decide if we support, yes or no, the event.”

“Like the Chief of Police said, 7 or 8 police officers were not enough. I think it’s better that we discuss this before voting, so I agree with Mr Chamaillard, we don’t want to let this linger, but voting yes or no now, well, I would be inclined to vote no. For two years, I have been a supporter of the Bike Fest, so my opinion might change after meeting with them,” said Councillor Ouellette.

“I believe there is a lack of organization and I would like to see the reports. Saying he needs an answer now because he wants to get provincial and federal support, well, I think we can wait and there will still be time for that,” said Councillor Thibodeau

“Can we just, for now, vote to support next year’s Bike Fest and meet afterwards so that they can move on with the various applications. I believe that it’s a no-brainer and that we need to support Bike Fest for next year. Yes, we should have a post-mortem meeting, but the way I see this is that he’s asking if we support the Bike Fest and my answer is definitely and that town will have its demands but for now, as a municipality, we need to support the event.” added Lalonde.

“I am not against the Bike Fest, I support it, but we need them to collaborate and meet with the Chief of Police. I don’t like being threatened,” reiterated Portelance.

The threat mentioned by Councillor Portelance came from the email exchange between Mayor Charlebois and Yves Charlebois. In the email, Yves Charlebois states that the organization was approached by many other municipalities that were ready to give them a better deal to move it. He also stated that the organizers truly wishes to keep the event in Hawkesbury but that they will need better management on their end to do so.

As for the post-mortem meeting Yves Charlebois said: “of course we want to meet with them and discuss what went wrong. There wera a lot of back and forth and surprises, like the merging of the Canada Day festivities into our own. The deal we wanted was that if we pay the police and firefighter bills that the Town would not have a bar on Main Street as to not compete with our service.”

“Well, in the end, we are paying the [police and firefighter] bill and they still operated the bar. And yes, we will meet with them for a post-mortem meeting, but how the heck can we meet if our files are still open because we didn’t receive the bills from the Town!” said Yves Charlebois.

Yves Charlebois said that the organizers of Bike Fest do this mostly on their own time because they are passionate about the event.

“Here at Goulet Motorsport, all summer long we are super busy, so the Bike Fest is really for the community. We do this to give something back to our customers and bike lovers in the area. All we want is to have only one liaison person for next year so that we can skip the back and forth and not be part of the decision process between members of the administration we have a lot of other things to take care of,” said Charlebois.

Charlebois said that he had a contact at the town, Nicole Trudeau, who did an amazing job at coordinating the town’s side of the event but that at one point she was removed from the table and that’s when things got more complicated.

“I don’t think I threatened anybody in my email, it’s just business. If another municipality can give us more and create a better climate for us to have a Bike Fest, then we will move. But for now, we will wait for the final bills, meet with whoever we need to meet and hopefully have better communication and coordination with the Town,” concluded Charlebois.