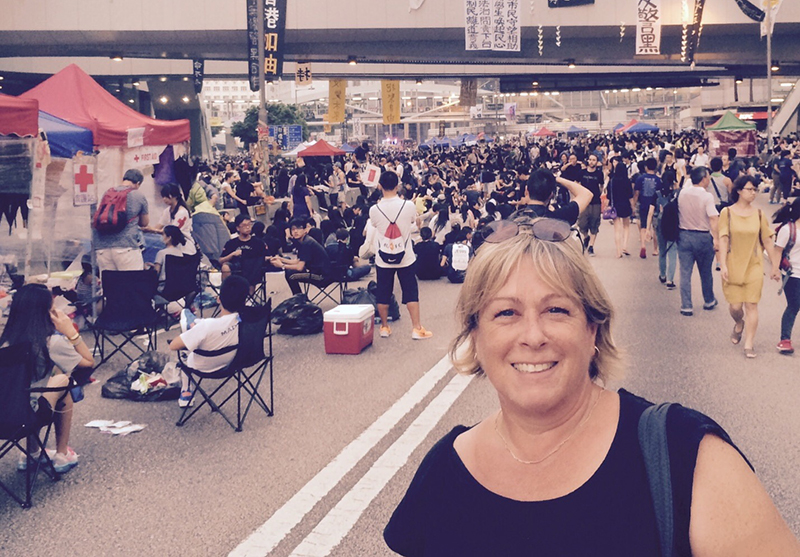 Nina Flath-Christie stands in front of the Umbrella Protests in Hong Kong in 2015. (Submitted photo)

Home has never been a constant for Nina Flath-Christie.

Growing up with a father who worked as a pilot in the Canadian military, Nina had no choice but to adopt travelling as second nature from an early age.

“My father was in the military, so I moved all over Canada as a kid—I never stayed in any one place very long.”

Things didn’t get any more static in her later years. As if being a child of the military wasn’t enough, Nina would keep her wayfaring ways going strong into adulthood—like her mother before her, she, too, married a pilot.

Not only did she not get rid of the travel bug, it seems she gave it extra wings.

What would be more surprising, perhaps, is that she would ever end up settling in one place, at all. And yet, with her most recent destination, that’s exactly what’s happened—she’s found a home in Hong Kong.

Flath-Christie has lived in Hong Kong for the past nine years. She and her husband, Gerry, moved to the city in May of 2008, when he joined Cathay Pacific Airlines as a simulation instructor.

For most people her age, nine years in one spot wouldn’t qualify as particularly long-term, but for Nina, that represents one of the longest-settled periods of her life—and she’s ejoying it to the fullest.

“It’s been a while—that’s for sure. But it’s an awesome place to live.”

She has even become an official permanent resident of Hong Kong—a designation which requires foreign nationals to spend a continuous seven years in the city.

Still, Nina hasn’t completely left Canada behind. She and her husband own a cottage in Lake Louisa, Quebec, where she often spends time during the summer months.

Since coming to Hong Kong, Nina has taken on an array of different occupations. She has assisted at daycares, tended bars downtown, even volunteered at animal sanctuaries in Cambodia and Thailand. As part of this work, Flath-Christie has engaged in activism to end abuse towards elephants. She says the treatment the animals receive as part of the elephant-riding industry is “disgusting”.

“They take the babies from their mothers, and then break them to make them tame so that people can ride them. It’s devastating for the animals.”

Though certainly not to the same degree or kind, Nina has, herself, experienced familial separation since moving to Hong Kong. Her children—Shannon, Gary, and Jonathan—all remain in Canada: Shannon resides up north, and works as a nurse for remote communities; Gary lives in Ottawa, working with Trading Central as a technical analyst; and Jonathan, who was one of the original partners involved with IGS in Hawkesbury, now runs his own consulting company and also works with Canada’s Department of National Defense.

Both Shannon and Gary have been to Hong Kong to visit their parents but unfortunately, Jonathan’s work has kept him from making the trip. Nina says it’s hard to be so far away from the children but she’s glad to see them making their way in the world.

“Of course, [I] miss them sometimes, but they’re out there doing their own thing and I couldn’t be more proud of them.”

In some ways, Nina says Hong Kong is not so different from Canada. Nonetheless, she makes it clear that the city is a place all its own.

“On one hand, it’s a lot like here. You can go shopping, visit with friends—all the things you’d regularly do. On the other hand, it’s definitely different,” Nina explains. “The culture is very distinct and there are some other things that remind you that you’re kind of in a whole other world.”

Hong Kong has a deep and unique history. Owing to its extended period of rule under the British Empire, the city is, in many ways, a crossroads for the Eastern and Western worlds—a new Byzantium for the modern age.

The city has been under the control of the People’s Republic of China since The United Kingdom officially transferred its sovereignty to the Chinese government in 1997. As part of the city’s constitution, Hong Kong maintains a high degree of autonomy under the government’s official “One country, two systems” policy, retaining the majority of the economic and social autonomy that it had prior to the transfer.

Befitting its title as “Asia’s World City”, Hong Kong is a truly international centre of trade and activity. Many people—like Nina and Gerry—come from all around the world to live in the city. In fact, it ranks as the eleventh most popular destination for tourists worldwide. As such, Hong Kong functions as a global cosmopolitan hub and consistently ranks as the one of the world’s freest and most competitive economic entities.

According to the World Economic Forum, Hong Kong has the highest financial development index score of any nation in the world. This score measures the factors enabling the development of financial systems among different economies. This is reflected in Hong Kong having the highest per capita income in the world.  However, the city also also has significant income inequality, with a Gini Coefficient—a measure of the disparity of wealth between individuals in a country—of 0.53, the highest in Asia.

“There are high-paying jobs and there are low-paying jobs, but everybody works,” Nina explains.

The Christies themselves live in the area known as Discovery Bay, one of many housing developments spread across the inlets that make up the coast of the island city. These days, they live on a 60-foot boat in the marina, but when they first came to the city, the couple lived in one of the apartment complexes on Lantau Island. At that time, their 1,100 square-foot, three-bedroom apartment was right around the corner from Disneyland and cost $28,000 per month in Hong Kong dollars—equivalent to approximately $4,480 Canadian. Nina says that’s cheap compared to other similarly-sized apartments in the city, which can cost up to $200,000 Hong Kong per month. Most apartments aren’t that size, however. Nina says most people in Hong Kong can only afford much smaller 60 square-foot apartments, some of which are sold as three bedroom units, despite their small size.

“The cost of living is high in Hong Kong. Most of the more expensive housing goes to the government officials from China.”

As Nina explains, the high cost of living is a prominent feature of the city. As an island, almost everything has to be shipped in. Food items that Canadians take for granted, such as steaks and watermelons, routinely surpass $100 Canadian. And that’s when they’re even available in the grocery stores in the first place. Nina says that many products can only be obtained sporadically, so when Hong Kong people see something they want to buy, they make sure to grab as much as they can.

“When people see something they want, they take ten of them.”

Wealth disparity also leads to significant disparity along racial lines in Hong Kong. Many Filipino immigrants come to the city looking for work—mostly as “helpers” for Hong Kong residents. These helpers essentially work as nannies, taking care of the children, cooking meals, and organizing the homes of their employees. Many of them even live with the families, usually working six out of seven days during the week—often for pay equaling around one thousand Canadian dollars a month. Sadly, Nina says the living conditions are often harrowing. She mentions some helpers she knows having nothing more than a bed placed on top of counters in the bathroom or in small, unlit crawlspaces beneath the stairs.

On top of the activism she has engaged in personally, she also witnessed one of the biggest protests in Hong Kong’s history just a few years ago. Nina was there for the 2015 Umbrella Protests, a student-led series of demonstrations, aiming to voice displeasure with increased control imposed upon the city by the Chinese government. The protests eventually turned violent, but as someone close to the events, Nina says the protesters themselves were not to blame for the change in character. She pins the blame for the violence squarely on the heads of police.

“I couldn’t believe how peaceful and organized and respectful the students were.” She explains. “You’d see them in the streets, doing their homework. They’d pick up trash—they were very clean. It was the cops who dressed up like protesters and started the fights. But then it got out that some of the (agitators) had their police IDs on underneath their clothes.”

Nina mentions a number of instances that speak to the fears of the protesters. First, she describes a time when someone she knew sent sensitive information to a friend in China. Within 24 hours, both phones were completely wiped, without any contact from anyone in police or governmental positions. She also describes cases of the government infringing on the city’s free speech rights. Specifically, she talks bout a situation in 2015, when two journalists were arrested after looking into the actions of Chinese government officials. Nina says its true that authoritarian control is a concern in the city but she says that it is not something that’s wholly dissimilar than other countries—China is just more overt about it.

“Yeah, they’re probably tracking everything we do but so are most governments. It’s not something you really think about in your day-to-day.”

The weather in Hong Kong is another one of the city’s signature attributes. Much in the same way Canadians live their lives according to the whims of the ice and snow, typhoons control the patterns of the people in Hong Kong. During typhoon season in the summer, the city operates a warning system to inform its residents about the status of the storms: at level T-1, things are getting windy; at T-3, things are getting very windy; at T-8, residents have two hours to get home before specific city services shut down; and at T-10, the entire city shuts down completely.

In addition to her work in Cambodia and Thailand, Nina has also been able to travel to many other Eastern locales during her nine years in Hong Kong. She has been to Singapore, Bali, and Malaysia, and has taken several trips to China, where she has visited all of the marquee sites and attractions, from The Great Wall and the Forbidden City, to Tiananmen Square, and the Terracotta Warriors. But still, she says Cambodia, above all of the rest, is her favourite to visit. Not only are the temples and historical sites enough to justify a trip all on their own, Flath-Christie says the local population are some of the nicest people she has ever encountered. Coming from someone as well-travelled as Nina, that statement carries a significant extra weight.

Should I stay or should I go?

As Flath-Christie describes life in Hong-Kong, a complex picture emerges—one of a city seemingly defined by its contradictory elements: international and cosmopolitan, yet stratified along racial and economic lines; deeply connected to its historical elements, while simultaneously pushing the frontier of modern development; vibrant and alive, despite the ever-looming shadow of authoritarian control.

But when it comes down to whether she’d recommend that people to take a trip to the city, Nina is unequivocal in her response.

“Oh, definitely. Everyone should visit if they can. Tell them to call me and I’ll show them all the best spots!”

As for whether the Christies plan to stay in Hong Kong into the future, Nina says that, while there are no plans to leave anytime soon, she can’t rule a return to roving at some point down the road.