Glengarry Pioneer Museum goes back in time to 1812 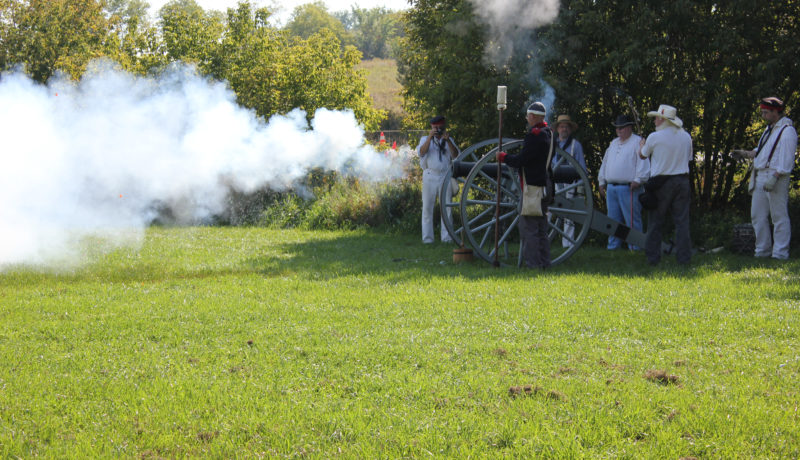 No nuclear-fueled DeLoreans were used to bring people back in time to 1812 at the Glengarry Pioneer Museum this weekend. All it took were passionate individuals from all over, wearing accurate era garments, with some gunpowder and a whole lot of historical knowledge.

The event is lead by Jim Mullin and this was his eighth year of re-enacting the War of 1812. More than 100 re-enactors were involved this year. Re-enactors are not just dressing up for the occasion, they also are deeply knowledgeable about the era and they will educate you on the lifestyle of the people that lived during these rugged times.

Joy MacSwain and Ivan MacSwain came from Nova Scotia to participate in the Glengarry Pioneer Museum’s 1812 re-enactment. They have been involved in re-enactments all across Canada since the early 90s. Some re-enactors scour the internet to find original or accurate replication of costumes, but Joy MacSwayne makes her own costumes from scratch.

“We started doing this in the early nineties and it became a passion for us,” said Joy MacSwayne while having an era-accurate dinner with her husband under a tent.

“I didn’t know how to sew before we started doing re-enactments. I loved going through books and find the original way of making garments. I do it all by hand, too, and people are always surprised at how strong the garments are once they are assembled,” concluded MacSwayne.

Jim Mullin is looking into bringing more re-enactors of native descent to give visitors a better understanding of their lifestyle during the War of 1812.

“We are just a bunch of passionate folks in a very niche activity. We operate with no grants whatsoever, but thankfully, re-enactors are professional and self-managed. Every year I try to bring something new and next year I want to keep developing the educational aspect of the re-enactment. We’re not just here to burn gunpowder!” joked Mullin.

Mullin himself is quite knowledgeable on local history and how region are was a pivotal point for Montreal which was once one of two major hubs on the continent, including Boston.

“I strongly believe that re-enactments can bring entertainment and education together. There is a lot we can learn about our current situation by looking in the past. Aside from the retirees, re-enactors are all employed full-time and we do it all for free. Passion for history is what keeps us going.”

“We are always on the look-out for passionate individuals that would like to join us and become a re-enactor and relive the War of 1812 or other eras!,” concluded Mullen. People interested of joining Mullin’s ranks as a re-enactor can get in touch at [email protected]