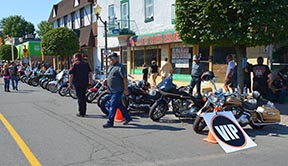 It will be a busy weekend in Hawkesbury since Canada Day activities, which were cancelled this year due to heavy rain, will be held on Saturday, September 2, during the same weekend as Bike Fest. Both festivities will offer a wide array of activities for festival-goers. As usual, Bike Fest will occupy most of Main Street while the town will be sharing Confederation Park for Canada Day shows and activities with the Bike Fest program.

On August 31, Bike Fest will be starting at 3 p.m. in the Goulet Motorsports parking lot where food and drinks will be served under a tent. Music will be played throughout the day, but the live bands will start their sets at 7:30 p.m. right after the motorcyclists come back from the opening ride.

On Friday, Bike Fest will start at 9 a.m. serving drinks and food under the tent in the Goulet Motorsports Parking all day long. Festival-goers will have the opportunity to test Harley Davidson’s motorcycles on rollers and attend the OPP’s Golden Helmets motorcycle skills demonstration. Local live bands will set the mood from 5:30 p.m. to 7:30 p.m. for Rough Edge, a AC/DC cover band who are back this year by popular demand.

Both Hawkesbury’s Canada Day and Bike Fest will share Confederation Park and Main Street on September 2. Helicopter rides, inflated games for kids and live entertainment will be ongoing throughout the day.

In Confederation Park, local bands will play in the afternoon, followed by DJ D-Noy. The Sleepless Sinners will then takeover at 6:30 p.m. until 8 p.m. The last band will be Kissed, a Kiss tribute band, who will be playing throughout the evening to sound of fireworks and the sight of a laser show from 9 p.m. to 11 p.m. Entrance fee for the Confederation Park activities is $10.

For this occasion, on September 2, Main Street from McGill to John Street will be closed to vehicle traffic, including John Street near Goulet Motosports. To ensure the safety and security of all motorists, residents, visitors and participants as well as several officers of the Hawkesbury Ontario Provincial Police (OPP) will be present as heavy traffic is anticipated during the Labour Day weekend.

To facilitate the constant movement of vehicles and pedestrians in Hawkesbury, the intersections will be monitored by the OPP throughout the day of the event.

The 2017 edition on the Auto Expo will be held on Sunday, September 3. At 1 p.m., in front of Seguin Realty on Main Street, there will be the Town of Hawkesbury’s Golden Book signing and players from the Ottawa Red & Blacks will be signing autographs for the fans.

A few military vehicles and large trucks will be on display to commemorate Canada 150. As usual, the trophies will be given out under the tent in front of the Pizza Pizza at 3 p.m.