Back on the bike: Local motorcycle racer returns from hiatus for successful race weekend 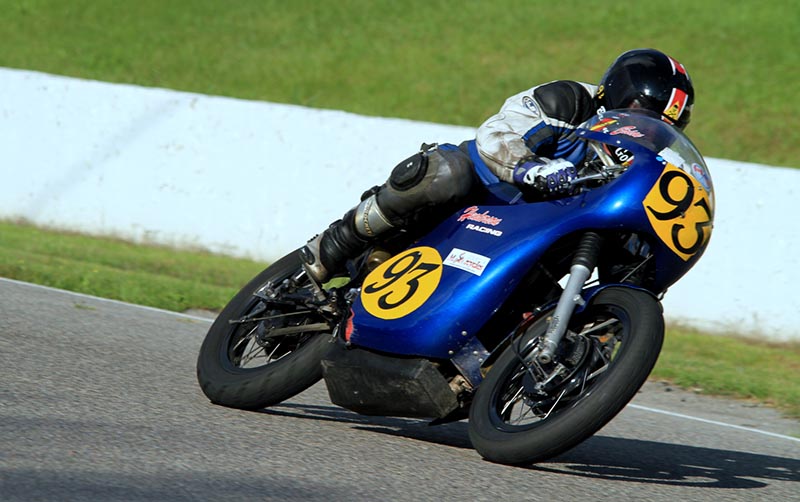 If you’ve ever wondered whether the saying “it’s just like riding a bike…” applied equally to motorcycles, let Brian Henderson’s recent race results dispel any notion to the contrary.

Henderson, a 40-year motorcycle racing veteran, won three medals at HB Cycle’s 2017 Vintage Road Race Association (VRRA) Vintage Festival over the weekend of August 12 to 13, after three years away from the track.

“I was pretty nervous going into the weekend, but I’m real happy with how it all went,” Henderson says about the results. “I wanted to put on a show and I think we accomplished that.”

For Henderson, there couldn’t have been a more fitting place to make his return to the sport than the VRRA Vintage Festival. His father took him to the event when he was 13 years old—the first live motorcycle race he ever attended. Fifty years and a career of racing behind him, it’s difficult to understate the effect that first race had on the young motor-head.

“It changed my whole life,” Henderson says. “I felt like I finally found where I fit.”

Remembrance for the past was not only a theme for Henderson’s experience of the festival, it was also something of a through-line for the entire event. This year commemorated the 50th anniversary of the 1967 formula one Canadian Grand Prix, the first to have World Championship status. As part of the celebrations, organizers held a banquet attended by eight former world champion motorcycle racers, including Steve Baker and Phil Read. According to Henderson, the whole event was a “fantastic experience”.

Of course, being a vintage festival, the bikes were also tokens of the past in their own right. Henderson mentions seeing classic bikes from the 1980s, old Nortons, and even Rudges from the 1930s and ’40s.

For his own races, Henderson rode a 1971 450 Honda, a twin-cam bike that, through various iterations, has been known as “The Black Bomber”, “The Hellcat”, and (less evocatively) the “K Series”. Barring a few gearing problems, Henderson says the old machine served him well throughout the weekend. His body, on the other hand, gave him a little more trouble.

“I’m still recovering. You use muscles that you forgot you had,” Henderson says, twisting back a shoulder to test for lingering aches and pains. “But man, was it worth it.”

Where the rubber meets the road

What drives someone to keep coming back to the track after all these years? For Henderson, it all comes down to a feeling that can only be kindled through honest, head-to-head competition on the track.

“When you’re racing with someone, you find out what they’re about real quick,” Henderson explains. “You know when the green flag drops, the bull-[crap] stops.”

Henderson says that he tried out a more casual relationship to motorcycles after an injury forced him to step away from racing for a time. He spent those days riding choppers, building bikes and travelling, but he says there was always a “black hole”.

It wasn’t until 1997, after the death of his father, that Henderson bought himself a yellow super-light Ducati and took it out for a track day. At first, the rust got the better of him and his first two outings were, as he puts it,”all over the place”. But soon, he was back to his old form, and suddenly, that “black hole” all but disappeared.

“It was like I was a whole person again,” Henderson says.

Fuel for the future

As for upcoming races, Henderson says he’s keeping the door open for an event next month in Calabogie, pending news on a slated operation to deal with carpal-tunnel syndrome in his hands.

Beyond that, he says it’s all about balancing how his body feels against how much drive he has to get back out on the track.

“We’ll see how it goes from here. But a weekend like [VRRA] makes you want to get back out there—that’s for sure.”

Henderson’s last race prior to the VRRA Vintage Festival was in St-Eustache, where he won five out of six races. Injuries had kept him off the track for the previous three years.

In September 1971, Henderson made his racing debut (also in St-Eustache), placing third in his very first race. He raced until 1978, when a crash at the Canadian Tire Motorsport Park left him with a broken back and right leg, leading him to sideline his racing career temporarily.

In the meantime, he worked for Air Canada as an aircraft structures mechanic and is now retired and living in Vankleek Hill.