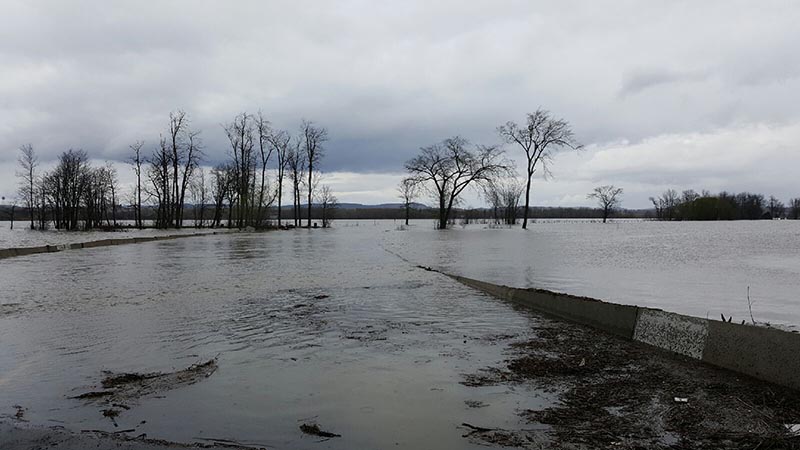 The City of Clarence-Rockland has declared a state of emergency as of 5 p.m. on May 4 because of flooding in the municipality. The area affected is between Canaan Road and Rollin Road, around Clarence Creek as well as around Cobbs Lake. Evacuation of the affected areas is now mandatory, and a shelter was set up at the Clarence Creek Arena. The declaration comes after the municipality recommended on Wednesday anyone affected by flooding find somewhere else to stay, as flood waters had made some roads inaccessible for emergency vehicles.

The Ottawa River Regulation and Planning Board says with between 25 and 50 mm of rain expected, “further significant increases in levels” in the Ottawa River between Pembroke and Montreal area can be expected. The board says based on current forecasts and depending on location, water levels should peak Sunday and Monday. As of the morning of Friday, May 5, water levels at Grenville/Hawkesbury were at 42.39 metres. The board is predicting an increase of 26 centimeters by Monday, so water levels would peak at 42.65 metres. In comparison, last year’s extreme high in the Grenville area was 42.1 metres, and previously, water levels in the area hadn’t risen above 42 metres since 1998.

In a statement on its website, Clarence-Rockland assured residents municipal water quality has not been affected by the flooding. “Even if the water levels undergo rapid fluctuations, its quality is not compromised,” said a press release on Thursday.

The municipality says anyone who wants to lend a hand to people affected by the floods can fill sand bags at one of several filling sites: 700 Industrielle Street, at the Waste Water Treatment Plant; at the intersection of Voisine Road and County Road 17 (park at River Rock Inn); at the end of Woods Street near the river; or on Pago Street in Clarence-Rockland.

“Owners that need them can pick them up at these locations. If residents need help to put the bags around their property, they can contact the volunteers directly at the filling sites,” said the municipality in a statement Thursday.