Read an excerpt from “Human Remains” 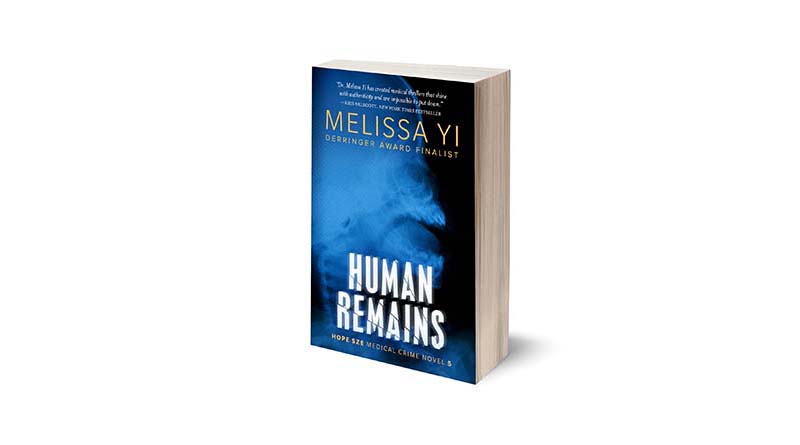 When Dr. Hope Sze discovers a dead man outside a stem cell lab, she must investigate whether he fell prey to the Zika virus – or something more sinister. It’s the central question of Dr. Melissa Yi’s latest crime novel, Human Remains, which debuts on April 25. Yi is a pen name for Melissa Yuan-Innes, who practices emergency and hospital medicine in Cornwall, Alexandria, and at CHEO in Ottawa. Below, read an excerpt from Human Remains.

Even if the terrorists don’t win, they can make your life an icy hell.

My name is Hope Sze. Last month, in November, I was one of two Montreal doctors taken hostage by a domestic terrorist/killer/idiot on an obstetrics ward, along with a woman in labour.

I survived “in body, although considerably rumpled up in spirit,” as Anne of Green Gables put it.

I could barely cut through the snowy park to the Ottawa University stem cell lab, while my boyfriend, Ryan, led his borrowed dog beside me.

Roxy the Rottweiler drifted from side to side, testing the limits of her leash.

When I paused at a barely-iced pond blocking our path, Roxy jerked the leash out of Ryan’s hand.

Towards traffic. And drivers who might not see a black dog at night.

We both ran toward her, screaming, “Roxy! Roxy!”

I skidded on the snow. I wobbled, pain knifing through my lateral ankle.

Ryan spun around to catch me, but I was already righting myself—obviously a sprain, not a break—and yelling, “Get Roxy!”

He broke into a sprint. Even as I hobbled after him, I marveled at the way Ryan cut through the trees, never missing a step, despite the darkness and the slippery ground.

Tree shadows fell on me, but so did the street lamps and a bit of moonlight.

Roxy wagged her tail, picking her way into the ditch bordering Lindsay Lane.

Ryan scooped up her leash, but his back stiffened. I rushed to his side, gasping, “What?” as cars whooshed on the road a few feet above us.

He pointed at Roxy.

She was sniffing something that looked awfully like a dead human body.

A body with a black bag over its head.

Here is a discount code from Kobo especially for Review readers: