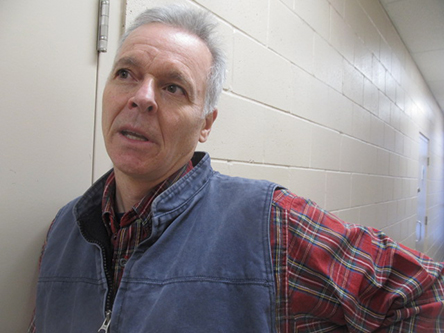 In an attempt to convince North Glengarry council to regulate clear cutting, citizen Pete Bock presented several solutions to what he calls “devastation of our land”.

At North Glengarry’s council meeting March 27, Bock listed off a number of potential solutions to address citizens’ concerns about deforestation.

Along with David Sauvé, Bock has spearheaded a group of about a dozen people in the Lochiel/Glen Sandfield area; these citizens are concerned about the effects of clear cutting.

“We want to start a dialogue with farmers and council to try and find a way to make this work for everyone,” Bock states. “We understand that North Glengarry is driven by agriculture and that farmers have to clear land, but there needs to be limits.”

Bock is referring to the three million trees cut over the last six years in the Glengarry area, mostly for agricultural purposes.

“We need healthy forests and healthy agriculture,” observes Bock. “But we feel powerless when it comes to clear-cutting and we’d like council to step in and implement regulations.”

To a standing-room-only crowd, Bock listed off at least six solutions that he feels will only be good for the area, farmers and taxpayers alike.

Bock suggests that burns be limited to winter months when residents have the windows of their homes closed, therefore reducing the impact of smoke.

“A permit should be required to create an entrance to the property where trees are to be felled,” says Bock, “And neighbor’s trees should not be cut without permission.”

Bock also suggests that heavy machinery should only be used at certain times of the year and not close to waterways. “One government employee told me that if you address any issue, it should be that cutting too close to waterways is the most harmful practice of all.”

Bock, a long-ime resident who, along with wife, Carole, raised three children in the area, is concerned about other effects of clear cutting.

“We would like to see council restrict the size of clear cuts and ensure that a permit be required if you want to cut more than three acres.”

Bock and his supporters would like to see legislation that ensures land owners have owned the land for at least three years before clear-cutting and that a plan regarding cut start and finish dates be submitted and that cuts in April, May and June be forbidden.

“This is the time when animals are raising their young. We shouldn’t be destroying their habitat then.”

Bock concluded by asking council to accept this temporary by-law proposal for information purposes and suggested that an ad-hoc group of residents and farmers get together and help the township find common ground to take first steps to forest conservation.

Deputy Mayor Jamie MacDonald responded by saying that farmers are good stewards of the land and are doing their best.

He described how a committee had already been formed to deal with the clear-cutting issues.

“We’re really happy that the South Nation Conservation committee has come forward to help get everybody together on this issue,“ MacDonald stated.

“Dialogue has already started,” states councillor Jeff Manley. “And based on our audience tonight, that’s a good thing.”

Manley explained that South Nation Conservation has been working on possible solutions and that all should wait and see what the committee has to propose.

Angela Coleman, General Manager of South Nation Conservation attended the meeting and was pleased with the tone, though notes that nothing concrete came of it.

“This was positive in that there were no hostilities and we seem to be making progress,” states Coleman. “There’s no earth-shattering news but I think we’re being forward and progressive.”