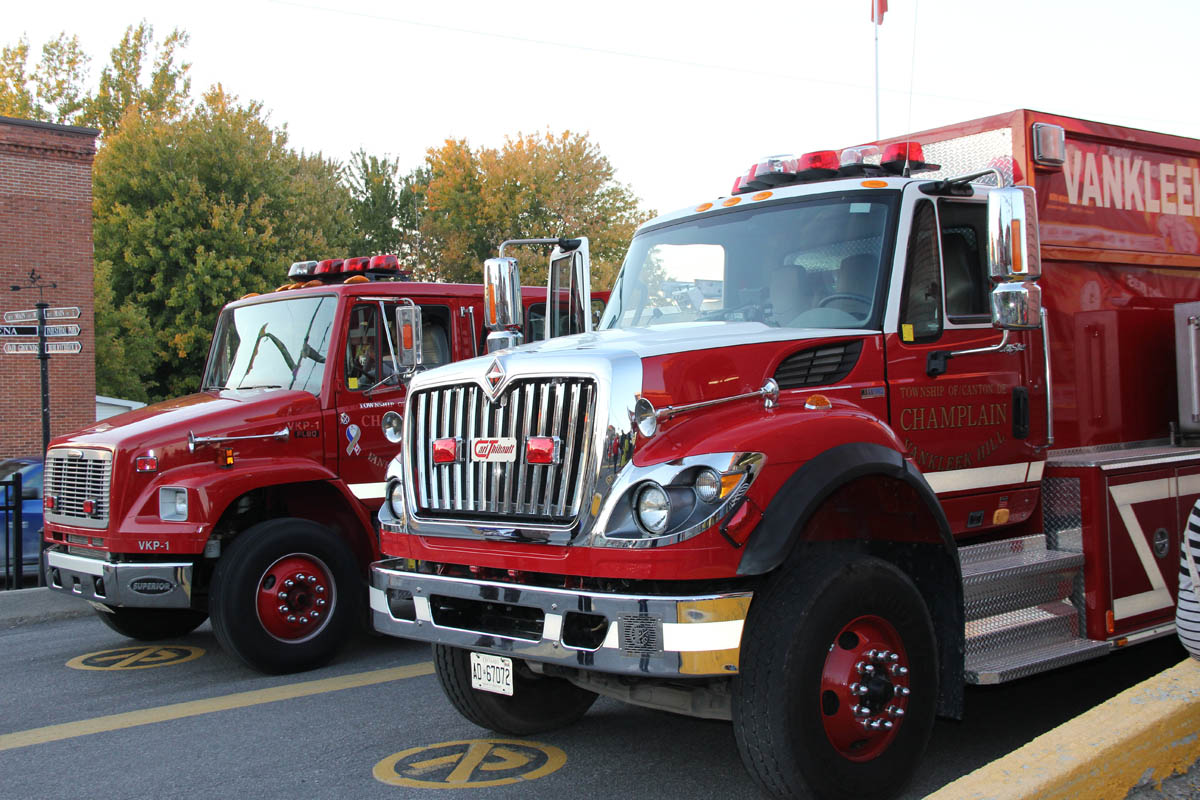 A near tragedy hit close to home on Friday, January 6, when the Vankleek Hill Fire Department responded to an accident involving the families of two of their firefighters.

“It was quite the mess. When we arrived on the scene, one of my firefighters, Eric Jaring was there. His daughter was lying injured in the ditch. Another one of my firefighters, Billy Allen, was dispatched to help his dad, Keith (Allen), who had also been injured. At that point we didn’t know that Billy’s daughter was also among the injured,” said Vankleek Hill Fire Chief Michel Martin.

Ontario Provincial Police (OPP) report that shortly after 6 p.m., two cars collided on Highway 34, between Ridge Road and Aberdeen Road, in Vankleek Hill. Police investigators determined that the driver of a black Saab attempted to perform a u-turn on Highway 34. As it did so, a southbound Mercedes collided with the passenger side of the Saab, leaving it disabled in the southbound lane.

The drivers of the two vehicles were able to exit their vehicles, with what police described as minor injuries. A few minutes after the accident, three good Samaritans, who lived nearby, left their home with an armload of blankets to assist the victims.

Leaving his van parked at the end of his driveway, Keith Allen and his granddaughters, 15 year-old Drew Allen and 17-year-old Emily Jaring, began to approach the accident victims, who were still near their cars.

At this point, police say that a commercial Freightliner truck, described by the fire department as being a fuel delivery truck, collided with the Saab vehicle that was blocking the southbound lane. The car was pushed onto the southbound shoulder, where it struck the two teenage girls, throwing them into the ditch.

After striking the car, the truck collided with Keith Allen’s van, before rolling onto its side in the southbound ditch.

During this incident, Martin said that the gas tank was ripped off of the fuel truck. The tank, which Martin estimates carried between 50 and 100 litres of fuel, flew through the air, striking Keith Allen.

During an interview with The Review, Billy Allen said that all three of his family members sustained serious, but not life-threatening injuries. His dad, Keith, suffered a head wound, but was later released from hospital. He was expected to go in for further medical tests and a CT scan on Monday. His niece, Emily Jaring, was treated for a broken femur and a laceration to her leg. Drew Allen sustained broken ribs, a punctured lung and a wound to her hand. Allen said that all three are expected to fully recover.

The driver of the fuel delivery truck was treated for minor injuries. Martin said that when he was being treated, the man complained of chest pains.

“Somebody was watching over them. I’m not a particularly religious man, but it does make you wonder,” said Allen. He credits his fellow firefighters for helping all of the accident victims, including his three family members. Allen said that watching his fellow firefighters coming to the aid of his own family gave him a newfound appreciation for the skills, kindness and efficiency of his team. He also wished to thank the paramedics and the medical staff at Hawkesbury and District General Hospital, who helped his family.

After arriving on the scene, Martin said that the first priority for the fire department was to shut down the highway and to assess the victims’ injuries.

“We counted the vehicles and immediately called for five ambulances. We were putting the victims in the rescue truck to keep them warm and we were transporting them into the ambulances as fast as they were coming,” said Martin.

The conditions during the accident were cold and dark, with temperatures below -23 degrees Celsius.

“It wasn’t a nice scene to arrive upon. There were lots of vehicles involved, including a fuel truck which was over on its side. Thankfully it wasn’t leaking. We just focused on taking care of the people… it wasn’t easy. They’re all related to me as well. They were also all my relatives. Your mind plays games with you for a few minutes, but then your training kicks in and you do what needs to be done,” said Martin.

The Vankleek Hill Fire Department dispatched 16 firefighters to the accident, including Billy Allen and Eric Jaring, who were released to accompany their family members to hospital. The rest of the team remained on scene until around 2:30 a.m. to assist with the accident and to oversee the emptying of the fuel tanker.

Highway 34 remained closed for several hours during the cleanup and ensuing police investigation, which was conducted by the OPP’s Technical Traffic Collision Investigators.

The 57-year-old driver of the Black, Saab, described by the OPP as being a woman from Vaudreuil-Dorion, is expected to face charges in relation to this accident. As of Monday, police had not yet laid charges.

“This was a spooky accident. They’re (the three Good Samaritans) are all laughing about it now as they recover. But it sure wasn’t funny on Friday night. They must have had an angel watching over them,” said Martin.