After devastating fire, St. Isidore church will be rebuilt at same location 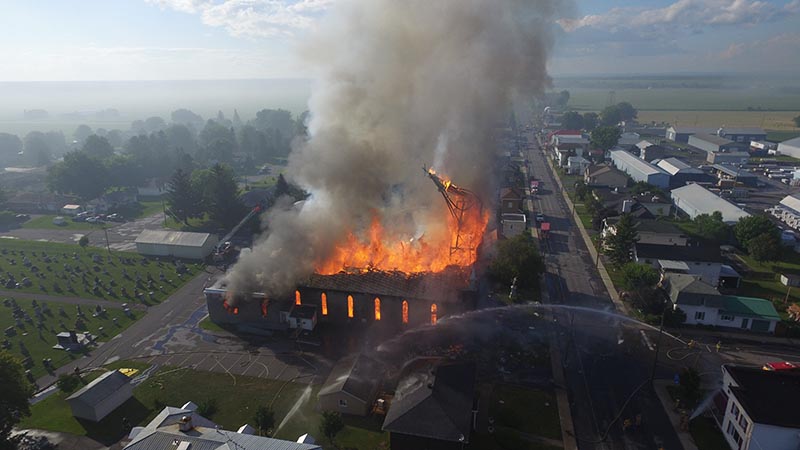 Father Pascal Nizigiyimana says that like the trees that grow from the ashes after a fire, his church will rise stronger and more resilient than ever before. On July 23, Nizigiyimana was one of many people who watched as the St. Isidore Catholic Church burned to the ground. It remained smouldering for days, as firefighters worked to extinguish the flames in the ruins of the 137-year-old church where Nizigiyimana oversaw a congregation of more than 150 people.

Word of the fire spread across the country and messages of hope soon began to flood the parish. 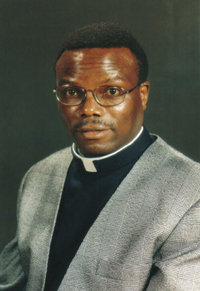 “I believe that God will help us to rebuild this church. He already brought so many people together to help,” said Nizigimana, during a phone interview with The Review on January 6.

The church was insured and Nizigimana says the insurance money is expected to be sufficient to build a much smaller church at the same location. A committee has been formed to determine the needs of the congregation. They have spent the past few months discussing how the new church will be used and visiting other churches to better determine which design elements and features to incorporate in the new church.

“We can’t even imagine building one of the big churches like we had before. When they built those big churches in the past, families were large, with ten or 12 children. Now our families are smaller, with one or two children. Our needs are different,” said Nizigimana.

It’s too early yet to describe what the new church will look like, but Nizigimana would like to assure his congregation that it will be beautiful. Not much was saved from the fire, except ciboriums removed from the building by Yvon Besner, who was working inside the church when the fire broke out.

Besner was preparing for the 4:30 p.m. mass when he noticed white smoke billowing from the back of the building. Before exiting the burning building to call the fire department, Besner raced to the pulpit and grabbed the three ciboriums. These are vessels used to hold the hosts, which are used for communion. They were the only objects recovered from the church.

The cause of the fire has been attributed to lightning strikes. Nizigimana said that the insurance report indicated that more than 60 lightning strikes were reported in St. Isidore when the fire started. The intense lightning storm also made fighting the fire difficult for firefighters, who were unable to attack the fire from the roof, due to safety concerns.

The Nation Fire Chief Tobias Hovey said that it became quickly apparent that the fire was contained in the attic, and accessing it was difficult.  The design of the church, combined with the fact that it was made in two sections, made interior access difficult. “We tried going through the stone walls, but we were unable to get through. We were certain it was in the attic, because we could see that there was nothing in the main hall. We tried going from the top down with the ladder truck. Unfortunately, a lightning storm circled back around and we were forced to retreat. We kept trying to access it from inside,” said Hovey.

More than 50 firefighters from a dozen fire stations including all five stations in The Nation, as well as St. Albert, Casselman, Maxville, Alfred, Plantagenet, Vankleek Hill and East Hawkesbury responded to the blaze.

A number of historical items were lost in the fire, including religious artefacts, the Casavant organ and the ceremonial clothing worn by Father Nizigiyimana. The parish records were safely stored offsite, in the parish office.

Nizigiyimana said that the parish is in the process of replacing some of the religious items needed for the ceremonies, including ceremonial clothing. They are working with other churches and are inventorying what they will need.