“Save our school” groups in Maxville, Alexandra ready solutions 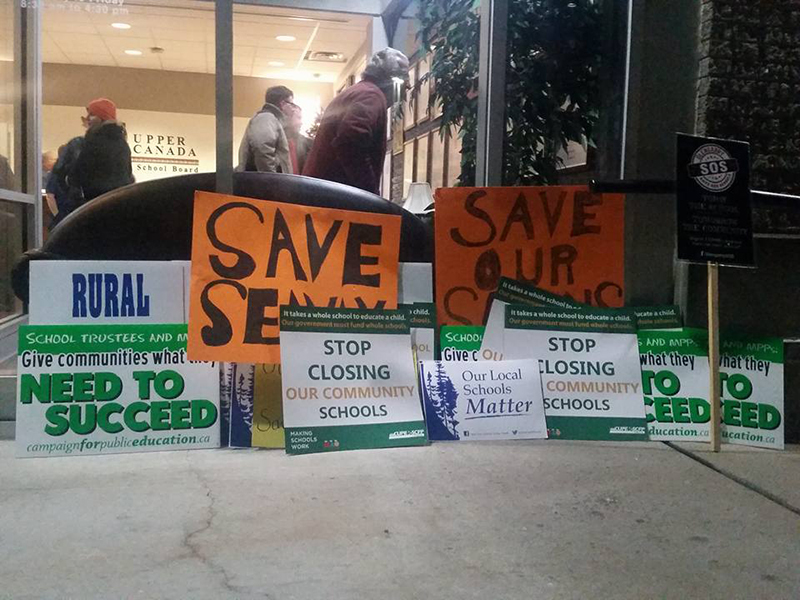 “Save our School” signs outside a recent UCDSB council meeting. (Photo Glengarry SOS/Facebook)

Parents in Maxville are hoping concrete suggestions will help save Maxville Public school from closure. A group called “Maxville – Save our Rural School” says demolishing an addition, introducing French immersion and offering before and after school care at the school will increase enrollment and lower costs for the board.

Maxville PS was among several school slated for closure by a draft report released by the Upper Canada District School Board (UCDSB). Gina Dragone, a member of the parent council for the school and a spokesperson for Save our Rural School, says she wishes parents were given a chance to participate in the process before the draft was published. With a final decision expected in March, Dragone says parents and community members have felt pressured by the deadline.

Dragone is originally from Glengarry, but lived in Ottawa four years ago, when she decided to relocate her young family to Maxville. She says she checked out Maxville PS before making an offer on a home. “It’s a small school, it’s a great school, and it’s in a really close-knit rural community,” she said. Its potential closure “really does impact me personally, because I had moved my whole family just so my children could get an education at a rural school.” The closure could deter young families from moving to Maxville, Dragone argues.

The board has not made any final decisions, and is holding public meetings in January and accepting feedback via a survey.

A major factor in the decision about which schools would be considered for closure was enrollment versus surplus space – schools with more surplus space were at a greater risk of being slated for closure. The board says Maxville PS has only 117 students with a capacity of 300, but that’s including unused classrooms in an addition, which Save our Rural School argues could be demolished inexpensively. The board is suggesting closing Maxville PS and building an addition onto Roxmore school, but the group argues it would be cost-effective just to get rid of some of the surplus space in Maxville.

The group will be presenting its “Maxville Solution” at a consultation meeting organized by the school board on January 23 in Cornwall at 6:30 p.m. (1500 Cumberland Street).

Dragone says she isn’t certain what she would do if the school does close. “I’ll stay in Maxville,” she says, “but I’m not sure I would necessarily sent my kids to Roxmore public…it’s a really long bus ride for my kids.”

In a message posted on Facebook on Christmas Eve, Glengarry SOS, a group opposing the closure of Glengarry District High School (GDHS), said its members felt optimistic about the future of the school.

“We feel that the outlook has brightened for GDHS. Though there is still work to do, and some hurdles to overcome, before the final report is released in mid-February, there is a healthy optimism among the many volunteers and community members who’ve been engaged in the Glengarry SOS process,” it said.

The Glengarry SOS effort has focused on the bilingualism of the community, as well as the many opportunities and services available for students in Alexandra. “We are fortunate to have a unified, bilingual community, diverse co-operative opportunities for our high school students, and amenities in the town and outlying area that are second to none,” said the message. “These advantages all contribute to an enhanced, one of a kind secondary school experience for the students who attend Glengarry District High School in Alexandria.”

The “Glengarry Solution” published by the group suggests making GDHS a “host” for consolidation – instead of closing GDHS, it argues, GDHS would accommodate students from other schools. “We are centrally located within Glengarry, and, should the Board insist on amalgamating schools, we could absorb students from at least three nearby secondary schools, giving the Board amalgamation options that other high schools can’t provide,” says the plan. The solution also points out that if GDHS closed, students in Alexandria would have other options besides the next-nearest UCDSB schools, which are in Vankleek Hill and Avonmore.

Glengarry SOS also says local businesses provide co-op and employment opportunities. The committee enlisted the help of the Alexandria Chamber of Commerce, which encouraged its members to send a letter to the school board voicing opposition to the school closure and support for the Glengarry Solution. A form letter sent to chamber of commerce members also emphasized what effect the school closure could have on local businesses. “The sense of community and support for schools in rural Ontario should be heralded as one of the strongest dynamics in Ontario. The reason I chose to establish my business in this rural community was to contribute to and support that dynamic. Removing the students from this town will gut the foundation on which our community and businesses are built. Without a public high school, families have little incentive to move into or visit our community. We need these students here to continue the economic success of our businesses both now and in the future,” it says.

The school board posts updates about the public accommodation review process on its website here.