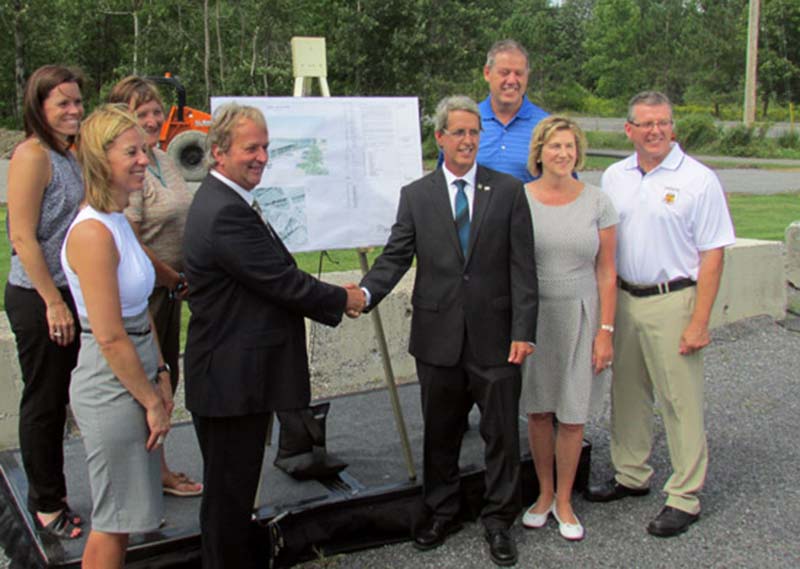 The $4 million grant was announced at a press conference in Embrun in August of 2015. (Photo Valoris PR)

Valoris has moved into its new building in Embrun. The province contributed $4 million for the new service centre, which is replacing Valoris’ Casselman location.  The building was expected to cost $5.1 million overall, with Valoris paying for the balance. A variety of services will be available at the centre, including counselling for people who have experienced violence, services for people with developmental disabilities, and services related to child welfare and mental health.

The $4 million in funding from the Ministry of Community and Social Services was announced in August, 2015. Valoris purchased a property in Embrun, Russell Township, and construction of the new centre was completed by the end of March, 2016. The Casselman location closed, replaced with the Embrun location (8 Valoris Street) on November 28. The organization said in a press release that an open house at the new centre in being planned for the spring of 2017.

Valoris provides mental health services for children and families, as well as services for children and adults with developmental disabilities and victims of abuse or family violence. In 2015-2016, Valoris employed 396 people and had an about equal number of volunteers, plus 131 foster families. It oversaw five adoptions and had about 114 children in its care. The organization worked with 545 adults with developmental disabilities, and offered support to 167 women who were victims of violence. The largest proportions of the organization’s overall operating expenses ($42,099,006) were spent on child protection services ($15,935,456) and adult developmental services ($17,378,193).

Valoris also has service centres in Hawkesbury, Plantagenet, and Clarence-Rockland.