Man walks away from collision with minor injuries 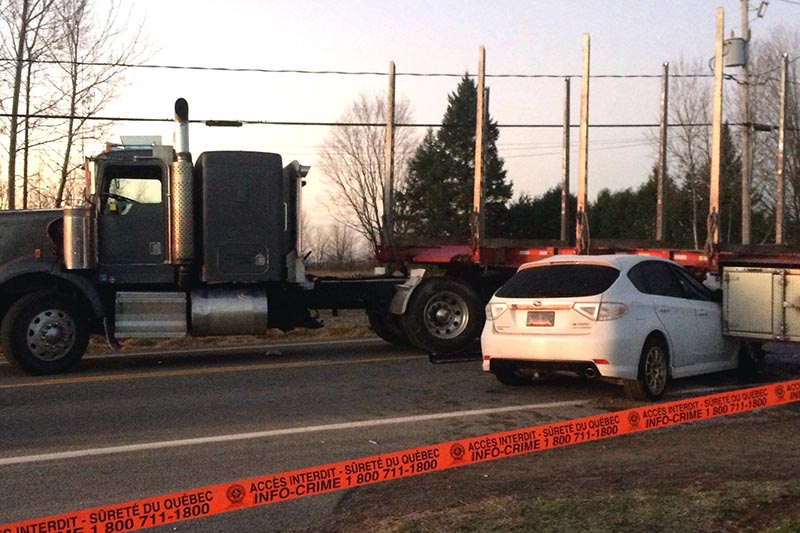 On Monday, November 14, Highway 148 was closed to traffic following a collision between a car and a semi-trailer. One person sustained what police referred to as non life-threatening injuries. (Photo submitted)

Police are referring to a man who managed to extract himself from his own vehicle and left the scene of a collision with a semi-trailer with only minor injuries, as “extremely lucky.”

Shortly before 5 a.m. on Monday, November 14, a semi-trailer was backing into a driveway on Highway 148, in Brownsburg-Chatham, when a Subaru vehicle collided with the trailer of the truck.

Police spokesperson Sergeant Marc Tessier, said that the vehicle, which was travelling in a 90 kilometre per hour zone, drove straight into the trailer of the truck. The front of the car became wedged underneath the truck, causing extensive damages to both vehicles.

The 23-year-old male driver of the Subaru, who managed to get out of his car on his own, before emergency crews arrived, was removed from the scene by ambulance and was treated for what police called non life-threatening injuries. Tessier said that the driver of the semi trailer was not harmed.

“The first indication could be that the driver of the vehicle (the Subaru) was distracted,” said Tessier.

Highway 148 remained closed to traffic until noon, so that emergency crews could lend assistance and police investigators could examine the scene. The investigation remains ongoing to determine if either driver was at fault for the crash.